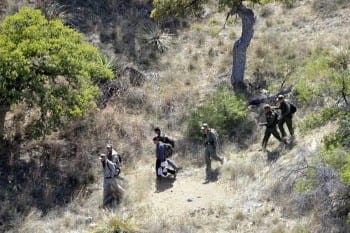 [dropcap]I[/dropcap] knew full well that our two February walks in the southern Arizona desert were nothing like the dangerous treks taken by thousands of migrants each year coming from south of our border. The dozen of us in the Christian Peacemaker Teams (CPT) borderlands delegation were safe inside of our white skin and U.S. citizenship and with our trustworthy guides and ample water. We were only visiting small bits of two migrant trails in order to leave some water for migrants and to see and feel what the unforgiving terrain was like for them.

Even so, I had a small sense of the danger our Mexican and Central American brothers and sisters must feel as I stumbled through the uneven and gravelly scrub full of mesquite, yucca, cactus and other spiny vegetation. Completely dependent on our guides to know which way to go, I was soon hot and tired and worried about two in our group who were barely able to keep up – a man who was overweight and had very bad eyesight and a woman who was red in the face and struggling to catch her breath. Both were very unstable on their feet and falling down as we hiked up and down hills, through dried up riverbeds and over rocky outcrops. How much harder it must be for those struggling for their lives over many days in these conditions.

As we walked, we could see discarded shirts and socks, empty water bottles, some footprints in the sandy bottoms of arroyos. Enough to feel the presence of the migrants. A helicopter flew overhead and we were told that there were innumerable cameras and sensors throughout the area. Maybe we were being watched, moving in broad daylight as we were. But again, we knew we were safe. We were not the ones being hunted by the Border Patrol.

Being hunted as criminals by a large, well armed, and increasingly high tech military force like the Border Patrol, the migrants are up against fearsome odds. Over 4,200 agents are employed in the Tucson sector of the borderland and they maintain a constant presence – on the roads, at checkpoints, in the cities and towns, in the air, in the outback, and with their ubiquitous surveillance cameras. And of course, there is the enormous and forbidding Wall, which is not so much a barrier to migration as it is an iconic and ominous message of unwelcome from Fortress America.

Nobody knows for sure how many die in this desert each year because many bodies are never found. The remains of over 2500 have been found in Arizona from 1999 to 2012. In the Tucson sector alone, 130 bodies were found just in 2014. Mostly, the cause of death is heat stroke. There are no signs of this toll slowing down.

Many more are captured by the Border Patrol, often in what amounts to a life-saving rescue. Nonetheless, the migrants are headed for another kind of hell. While Border Patrol agents who met with us assured us that arrests and detainments were made in a humane way, we heard reports of significant abuse and pervasive racism in the force.

In a 2011 report titled A Culture of Cruelty, the organization No More Deaths documented many abuses by the Border Patrol, including denying food, water, and medical care, physical abuse, overcrowded, unsanitary, overly cold or hot detainment conditions, and more. The report states:
“In our years of documenting abuses committed by the Border Patrol against detainees and migrants, we have found that instances of mistreatment and abuse in Border Patrol custody are not aberrational. Rather, they reflect common practice in an agency that is part of the largest federal law-enforcement body in the country, Customs and Border Protection. Many of them plainly meet the definition of torture under international law… We believe our findings demonstrate that abuse, neglect, and dehumanization of migrants is part of the institutional culture of the Border Patrol, reinforced by an absence of meaningful accountability mechanisms.”

Upon arrest, migrants are bound for a criminal justice system that is seriously stacked against them. A key element of the system is the court hearing known as Operation Streamline. This is a program of en masse, fast track prosecution of immigrants that was begun in 2005. In Tucson, up to 70 people appear together in court each weekday, shackled in chains on their hands, feet, and around their waists. In order to avoid a felony charge, they are all advised by court-appointed private attorneys to plead guilty to a lesser charge and that is exactly what they do, lined up 8-10 at a time in front of the judge. All of the defendants receive sentences of between 30 and 180 days in prison. Operation Streamline defendants serve their sentences in publicly and privately operated federal prisons throughout the country. Frequently they are sent to a prison located far from their family and community. This is normally followed by deportation. From start to finish, it is a travesty of justice.

Approximately 700,000 people have been prosecuted for illegal entry or re-entry, through Streamline or other prosecutions, since Operation Streamline began. Almost 70,000 migrants were criminally prosecuted at the border during federal fiscal year 2015 alone.

And to what end? The official reason given for this huge system of military occupation, kangaroo judiciary process, and mass incarceration is deterrence – to stop people from migrating to the U.S. from Mexico and Central America. But no one we met during this delegation thinks that it is actually serving that purpose. While there is currently a dip in the numbers of people risking their lives and freedom in coming across the border, this is largely thought to be a factor of economic realities – fewer jobs on the U.S. side, more jobs in the maquiladoras on the Mexican side.

As long as the root causes for the migration remain in place, the migration will undoubtedly continue. These causes are well known. People come because they are poor and hungry, primarily as a result of the wreckage to their livelihoods brought on by NAFTA and CAFTA. They come because of the violence they have endured from repressive governments armed and supported by the U.S., from cartels involved in the trafficking of drugs, guns, and people, and from local gangs that have grown out of the criminal and impoverished environments in their home countries.

They also come because they have been separated from their families and loved ones after being caught up in the avalanche of deportations now taking place in the U.S. The Department of Homeland Security data show that the Obama administration deported a record 438,421 unauthorized immigrants in fiscal year 2013, continuing a streak of stepped up enforcement that has resulted in more than two million deportations since Obama took office.

While visiting a soup kitchen in Nogales, Mexico that serves a great many of the recently deported, I was struck by several personal stories. One man in his mid-thirties, who spoke perfect English, had been in the US most of his life, living in Los Angeles and Utah. He was arrested as a result of a traffic ticket incurred by his mother, found to be undocumented and sent to jail for three years, then deported. He had just arrived in Mexico two hours before I met him at the soup kitchen. He has a mother, wife, and four children (two in Utah, two in LA). He will try again to enter the U.S.

I also spoke with a young man of 29 who had lived in New York City since the age of nine. He went to his mother’s funeral in Mexico and was arrested trying to come back to the US. He has tried re-entry five times, escaped back to Mexico twice, and spent time in U.S. prison three times, having gone through Streamline. He was told that next time he will receive 2 years in prison, but he is going to try again soon. He has a wife and three children in New York.

I talked with three young people from El Salvador who were escaping the gang violence and hunger there. One young man said he had to go to the US to make money so he could send it back to his mother who has no money and very little to eat. He had been arrested in Montana where he was picking potatoes and deported. He was now on his way for another try across the Arizona desert.

What struck me as I talked with these migrants is that I would do the exact same thing if I were in their shoes. Yes, I would risk death or arrest to get back to my children and family. Yes, I would cross the desert in search of food and sustenance for my mother and myself if we were hungry and desperate. Yes, I would try to return to the country I grew up in and the only home I knew, even if I were undocumented.

It is no secret who benefits from this war on immigrants. It is the corporations who enacted the supposed free trade agreements and profit from exploited labor. It is the military/police/surveillance/private prison industry. It is politicians who stay in power by creating enemies and get elected with the help of campaign contributions from those who stand to gain from our hard-hearted policies.

Each day on this CPT delegation, we had time for group prayer and reflection. Always, the contrast between Christian values and the suffering imposed on those coming across our borders to seek a better life was jarring. How can Christians – or people of any faith, or no faith, for that matter – reconcile themselves to the militarization and victimization taking place in our borderlands, in our names?

We met many good people in the southern Arizona region working to provide humanitarian aid to migrants, to accompany those in need, and to advocate for more humane immigration policies. They too are breaching walls, traveling in stark and threatening territory, caring for family – the human family. Blessed are the peacemakers.

Our walks in the desert and visits with deportees and those working to accompany them entailed no real risks on our part. Other than the risk that our consciences would call us into action. Walking on a migrant trail is, after all, a walk with ourselves