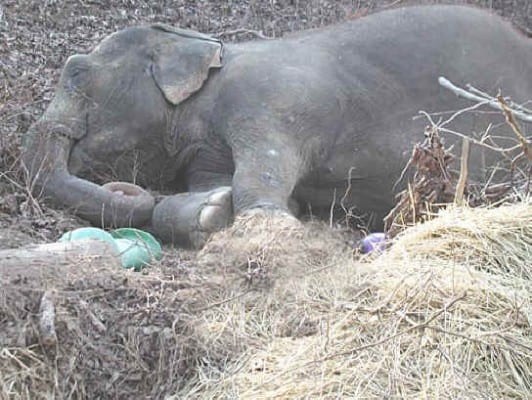 Delhi, rescued from a circus, enjoys the new life a true sanctuary brings. The chance to lie down and have her first toys in 55 years. [Courtesy: Maureen Adams, The Elephant Sanctuary}

The Animal Rights movement is barely forty years old.
As a political force it is an infant, not yet even able to stagger as a toddler.

Its political sophistication is nearly as infantile.

There are as many opinions as there are issues to address, and almost as many who decry any course of conduct which requires political attention.

Compassionate people populate the movement, as would be expected. They place the animals’ well-being and their protection above all other concerns.

The fact that no political philosophy or economic system has championed animals, and in fact have played significant roles in their suffering, has been sufficient justification for many in the movement to reject both and pursue a near religious belief in advocating veganism as the sole societal tool in ending the Animal Holocaust.

They scan the political landscape and see a plethora of progressive campaigns advocating for social justice and see only the differences, not the commonality, with the Animal Rights movement.

There is almost unanimity on a theoretical ban on animal slaughter, but incredulity that such an action could likely only be taken by a Socialist government. Being steeped in middle-class backgrounds and Conservative philosophy has rendered many incapable of acquiring a realistic worldview or an appreciation of revolutionary struggle.

Some activists point out that no government or economic system in history has been supportive of animal rights, concluding that the issue is moot, and that the course of action is to advocate for veganism and the adoption of compassionate lifestyles. They point to the Jains as examples.

Jainism is one of the world’s oldest faiths, having the most compassionate religious belief system in the world. They oppose violence against all living creatures, a perfect fit with the Animal Rights movement. But Jainism is followed by only 5 million people in the world, and has been declining in adherents for the past 13 centuries.

Compassion alone cannot bring about a compassionate world. Northerners refraining from buying slaves had no effect upon Southern slavery. Paying fair wages did not assure that others would also do so. Opening one’s business to African-American patrons did not abjure the need for civil rights legislation. Eventually it took an army of industrial size to dismantle the “peculiar institution.” By the same token, respecting a woman’s political opinion was not the same as assuring her the right to vote. The suffragist leadership understood that much.

Reformers have always relied upon the power of government to enforce those advances in the human condition that could not be achieved by mere example.

Every social justice crusade requires the imprimatur of government to ratify its success and to enforce its gains.

Nor are campaigns to spread vegan lifestyles working. Theoretically, if everyone eschewed the consumption of animals and animal products, the Animal Holocaust would end. Unfortunately, the human population is increasing faster than is the vegan population, meaning that veganism is losing. But even if veganism were slowly overtaking carnism as a lifestyle choice, the Animal Holocaust would continue as long as Capitalism promoted and rewarded the exploitation of animals, and governments continued to permit the horrors of animal agriculture.

As the new kid on the block here at the Greanville Post, an introduction seems appropriate.

I was a stockbroker and an investment banker, but I’m now a Socialist.
I am a political strategist.
I am an historian.
I served on President Jimmy Carter’s staff.
I lost a landmark free speech case in the US Supreme Court.
I ran California’s Proposition 13 campaign for Howard Jarvis.
I was a Los Angeles City Commissioner in Mayor Tom Bradley’s administration.
I served on Alabama Governor George Wallace’s staff.
I was a journeyman machinist while in college, and worked on the rocket engines that went to the Moon.
My family followed the Dodgers to LA from Flatbush in 1960 (my father handled the Dodgers’ insurance).
I have 7 rescued parrots, 6 rescued dogs, and one rescued cat.
I ride motorcycles, sail, fly, and shoot skeet, although not so much of late!

I invite you to visit me on Facebook. (www.facebook.com/RolandWindsorVincent)
There you will find some 500 of my essays under Notes. They address Animal Rights, religion, history, philosophy, politics, and strategies.
Quick, easy reads.
Browse.
Share any you find worthwhile.

If you have personal questions or comments, you can reach me at: rolandv@greanvillepost.com