—a place in a desert, an Arab state, a kingdom 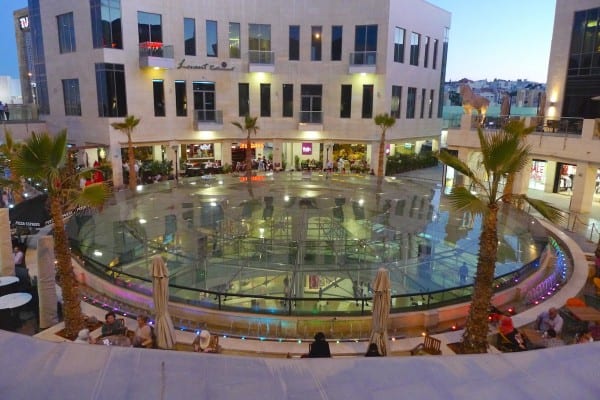 “A brilliant place for shopping”, a European expatriate, a U.N. expert living in Amman, tells me. “I get here anything I want. Life is good…”

“We have no water”, laments a Bedouin refugee, embracing his children on the outskirts of one of the biggest and most brutal refugee camps on earth – Zataari, just a few kilometers from the Syrian border. “In Zataari, we have to pay for everything now, and those Syrians who are controlling the camp are charging us, all of us who are needy and desperate, for everything… They take advantage of us. They have no mercy… That is why we are living in this tent, outside the camp. Only our children work, because both Syrian ‘refugees’ and Jordanians pay them close to nothing…”

• WATCH THE SLIDE SHOW ON THIS REPORTAGE

Several well-groomed ladies wearing hijab are smoking water pipe at one of the smartest malls in the Middle East – “Taj”. It is at top of Amman’s ‘snob index’. Yes, there is one, proudly published on line.

There are plenty of snobs in the capital. Country of some 8 million is producing close to nothing, but many locals are living high life here, thanks to their collaborating with the West and with Saudi Arabia. To be on good terms with Israel is another lucrative business. And to have US military bases on its territory, and to have US army and air force ‘visiting’ Jordanian bases, is also one great way to get cash (Jordanian military receives tremendous funding from abroad, but it is strictly discouraged to investigate exactly ‘how much’?)…

Refugees, old and new, are great business. Not for the poor Jordanians, not for the majority, but for the elites.

It goes without saying that helping the West and Saudis to destabilize Syria (like Turkey, Jordan has some training camps for Syrian ‘opposition’, not just refugee camps, and part of Zataari is actually functioning as a training camp) is enormously lucrative business. 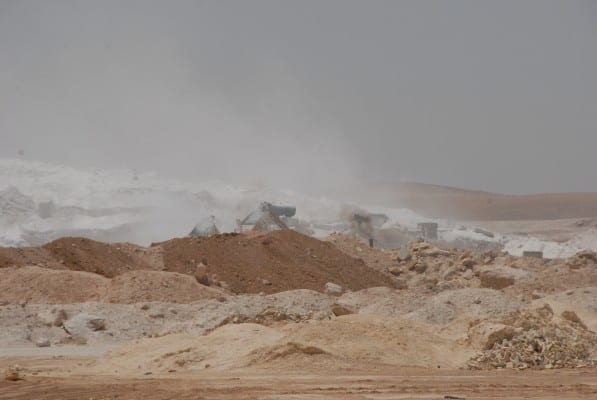 Even AP, at one point, could not shut-up, anymore, and snapped:

“Jordan is… officially denying that any training of anti-Assad fighters takes place on its soil, though both Jordanian and American officials have acknowledged it does.”

As we look at Jericho, from the top of one of the hills near the border, I breathe deeply while feeling goose bumps on my back: “Palestine!”

“Israel”, utters my driver, phlegmatically. Then, as he passes Jordanian military control, he calls the soldier “habibi”, which literally means ‘my beloved’.

Christian religious sites are huge business here, too, and to get to the River Jordan and to the place where Mr. Jesus Christ was allegedly baptized (if one believes in fairytales), it is necessary to endure steep fees and outrageous arrogance of Jordanian intelligence agents (the site is on the border between Jordan and ‘Israel’, as my driver calls it). 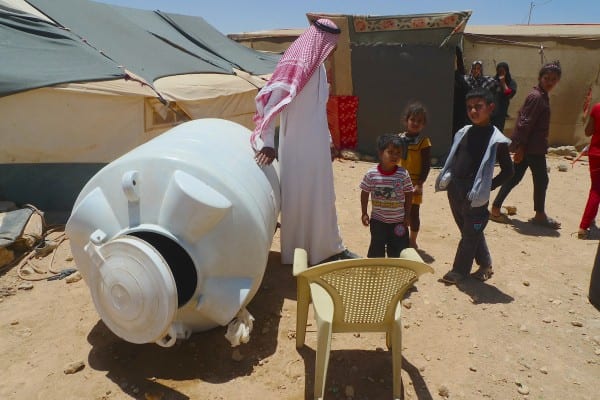 Empty water tank – Syrian Bedouin refugees outside Zataari camp. The Syrian war and Mideast chaos have caused a massive displacement of persons across the area.

Jordan is hardly a pride of Arab world. Palestinians are discriminated here, relentlessly, to the point that even the UN is occasionally protesting. There is also discrimination against Bedouins.

“We love Americans here”, explains Ahmed, an owner of a small café right in front of the ancient Roman theatre in Amman. “Many of us worked for them. I served as an interpreter on one of their bases in Iraq…” I heard similar story in Uganda, recently…

To trash Iran and Syria is in vogue here. I guess it is expected from you, if you want to get a decent job. But enormous military airports between Amman and the Syrian or Iraqi border are something one should not discuss… The West is not criticized here; to do it publicly is taboo. ‘One does not bite the hand that feeds you’ mentality…

One also does not comment on who is now building al-Azraaq refugee camp, designed for over 100.000 souls. Nor what purpose is it going to serve, exactly. Who finances it, who is constructing it, and who is profiting: hush, hush, and hush…

As I chat with Philippine and Kenyan waiters at a plush bar at Marriott hotel on the shore of Dead Sea, everything becomes clear. “It is mostly for foreigners,” I am being told. Resort is packed with expatriates on weekend outing, and with Israeli tourists. Poor Dead Sea is endlessly fucked, and soon will be truly dead, dry, as it is sinking by one meter a year. But while even at ‘Israeli side’ there appears to be almost no construction, Jordan is slamming one new enormous hotel after another and now even constructing shiny US-style shopping malls. ‘Who cares about environment? Foreign military and expatriates need some fresh air and booze.’ Gomorrah and Sodom are at the opposite shore, but this is their latest variety.

If you drive towards Petra and then Aqaba, it is all desert and misery, villages covered with dust and poverty on roughly Yemeni level. You drive towards Syria and it is approximately the same: miserable towns, military airports and refugee camps.

But back in Amman, it is 8 of what is called ‘5-star malls’, while several new ones are being built. The country is totally grotesque, but it is actually not something unique – just a condensed reality of the Middle East, or at least of the client states of the West in this part of the world.

Christopher Black, a leading international lawyer based in Toronto, Canada, explained for this report:

King Abdullah is acting as the cat’s paw of Anglo – American – Israeli aggression in the region by his support of the vicious war against Syria and its violation of the UN Charter and international law by allowing his territory to be used to launch attacks by US proxy forces and American “advisers” against Syria, by harboring armed guerrilla and terrorist groups and by facilitating the movement of Israeli forces on its common borders with Syria.

The wisdom here is simple: If you are member of the elites, serve Europe and the US well, then get yourself a Range Rover, buy few Michael Kors bags for your wife, Bally shoes for yourself, have a drink or two in order to appear very secular and very progressive, cover your head with Vuitton scarf if you are a female, and don’t forget to smoke a few rounds of aromatic water pipe.

And tell everyone how much you love your (actually, our) King. Otherwise, shut up, habibi! Or you will get your country into real trouble; if you don’t collaborate, it may end up like Iraq or Libya, Syria or Iran.

Special Correspondent Andre Vltchek is a novelist, filmmaker and investigative journalist. He covered wars and conflicts in dozens of countries. The result is his latest book: “Fighting Against Western Imperialism”.  ‘Pluto’ published his discussion with Noam Chomsky: On Western Terrorism. His critically acclaimed political novel Point of No Return is re-edited and available. Oceania is his book on Western imperialism in the South Pacific. His provocative book about post-Suharto Indonesia and the market-fundamentalist model is called “Indonesia – The Archipelago of Fear”. His feature documentary, “Rwanda Gambit” is about Rwandan history and the plunder of DR Congo. After living for many years in Latin America and Oceania, Vltchek presently resides and works in East Asia and Africa. He can be reached through his website or his Twitter.

A book for our time