Italy, like Spain, is a peninsula, but she might as well be an island given the barriers separating her from the rest of the European mass and the Mediterranean cradle itself.  This, and her long history, broken by frequent invasions from diverse cultures, has fostered the coalescing of an extraordinary idiosyncrasy rich in mysteries and contradictions.  Now we may be seeing the rise of a political culture that imitates the United States, and a new form of proletarianism, the “Precariat”. 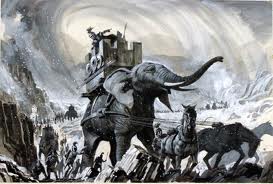 Foreign cultures often came from afar. Hannibal’s victories brought Carthaginean ways to Italy. At the outbreak of the Second Punic War, he marched an army, which included war elephants, from Iberia over the Pyrenees and the Alps into northern Italy. In his first few years in Italy, he won three dramatic victories — Trebia, Trasimene, and Cannae — and won over many allies of Rome. Hannibal occupied much of Italy for 15 years, but a Roman counter-invasion of North Africa forced him to return to Carthage, where he was decisively defeated by Scipio Africanus at the Battle of Zama.

By Gaither Stewart, European Correspondent, The Greanville Post
With annotations by Patrice Greanville
Italy has always been different. The Italic peninsula, hidden away behind the Alps from the rest of Europe and separated by the surrounding seas from Africa and the Middle East, stands in the middle of the Mediterranean alone, wary and mistrustful, conspiratorial at home and abroad alternately belligerent or isolationist; yet since the collapse of the Roman Empire it is forever in need of a powerful protector against invaders from all directions.

As a result of its geographical vulnerability to the foreign invader and the ever lurking usurper, the art of secrecy and conspiracy developed in that special Italian way, taking the name of Machiavellianism as a form of statecraft. Last October 15 remains for some as a most eclatant mystery of contemporary times: Why were 1300 violent and desperate Blacks—hooded, masked, darkly dressed—able to win such an easy victory on the streets and piazzas of Rome against police and security forces, abducting and disrupting the formally designated non-violent march of the Occupy Movement?

Though it is a truism that Italy is different, after a look at the reasons for the attack and the victory of the insurrection, the perceptive reader might shrug and think, yes, but many factors are the same in my country. Let’s list and take a look at the background and reasons for the insurrection in Italy last October 15 and compare them to, let’s say, to socio-political events in the good old USA. 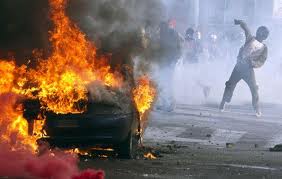 In such a national-historical framework, the violence is bound to be either criminal or as on October 15 insurrectionary/ revolutionary. Yet, it remains also true that it is difficult to distinguish between protest against social injustice from indiscriminate violence. I think that both currents were present also among many of the “Blacks” in Rome’s confrontations last October 15.

Senior editor for TGP, novelist, and veteran journalist, Gaither Stewart currently resides in Rome, an ideal base of operations to observe the old continent and file his European reports and essays. His latest book, Time of Exile, part of the Europe Trilogy, is scheduled for publication by Punto Press.

The Son of Africa claims a continent’s crown jewels

US and NATO murder Muammar Gaddafi

WHY MIDDLE-CLASS LEFT LIBERALS SHOULD DUMP THE DEMOCRATIC PARTY: FINDING...

Mass turtle rescue in Texas—humans doing something good for a...

Election in Ecuador promises to kick Washington stooge out of...