Do European lives matter? Not to Obama. But does anything or did anything matter to him? His America is down the toilet. And his Europe too. For different reasons of course. He didn’t mean to divide America. It just kinda happened. Wall Street was the priority and the Mexican Wall kinda built itself. The new Berlin Wall however is his baby. That was intentional. He built it with malice. And last week he came to Europe to kiss it goodbye. It felt like the kiss of death.

Trump wants to keep the Mexicans out of America. And he is ridiculed. Obama on the other hand wants to keep the Russians out of Europe. And he is applauded. Especially in Europe! Trump is all mouth. While Obama is all war. Yet the Europeans fear Trump. Maybe Europe’s Obama fetish is a peculiar death wish. Or more likely its a super colony obeying the orders of the super power. Even if the order is death. Whatever it is Obama’s departing gift to Europe is a time bomb. And Europe says thanks!

Europe is expendable – that’s the Obama doctrine. And one of Obama’s key representatives in Europe, Victoria Nuland, said it best in February 2014 when the time bomb was being planted in Ukraine: “Fuck [Europe]“. The fact that the EU elite itself obeys this doctrine doesn’t justify it. On the contrary, it justifies the opposite: resistance. In any shape or form. The only thing that can defuse Obama’s time bomb is the rejection not only of Obama but also of the EU.

Divide and rule is the oldest trick in the book. And Europe fell for it. Not once but twice. The first time as they say was a tragedy. This time around (the second coming) is just a farce. The first Cold War was believable (even if it was a hoax). The New Cold War though is a joke. But no one is laughing. Except Obama. He’s smirking. While his European pawns are deadly serious. And for that reason – if they – the Europeans -don’t stop – they’ll soon be dead. And Obama will still be smirking . 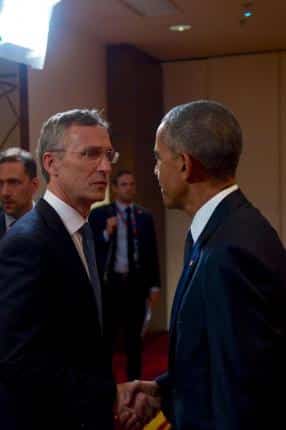 Obama’s time bomb comes in two parts. One is called the Ukraine. And the other is called the Baltic states. And the spare part is called Poland. Under Obama they all became highly irrational overnight. Obama activated them. And now they’re ready to trigger World War III at any moment. It’ll probably be the shortest War in history. For Europe that is, because it’ll be dust within seconds. But does Obama care? No. Does Europe even care? No. It loves Obama’s shit. The more he gives – the more it smokes it. The subsequent hallucinations and paranoia are weird.

Nothing Trump says or does comes close. Trump wants to arrest, deport and hate the Mexicans. In contrast Obama and his European clowns want to exterminate the Russians. And Trump is supposed to be the mad one! In Europe, Obama’s hate makes Trump’s hate look cute. Obama’s version is structural (its policy), whereas Trump’s version is emotional (its nonsense). No wonder Obama’s candidate (Clinton) got the full support of the US warmongering establishment. The weird thing is that  Europe – the target of Obama’s hate – also supported his candidate.

The Europe that obeys Obama however is a dead man walking. Its the lie called the European Union – a racket that financially bleeds ordinary “deplorable” Europeans. Like Obama’s candidate, the EU has lost touch with reality. And no longer is credible – if it ever was. As the EU loses the support of Europe’s “deplorables” it shamelessly clings onto Obama. Merkel, Hollande, Renzi and Tsipras kowtowed last week and didn’t complain about the bomb on their backs. Like true fundamentalists they believe in Obama’s hate. And are ready to be his suicide bombers. It’s a case of après moi, rien!

Europe is expendable – that’s the Obama doctrine. And one of Obama’s key representatives in Europe, Victoria Nuland, said it best in February 2014 when the time bomb was being planted in Ukraine: “Fuck [Europe]“. The fact that the EU elite itself obeys this doctrine doesn’t justify it. On the contrary, it justifies the opposite: resistance. In any shape or form. The only thing that can defuse Obama’s time bomb is the rejection not only of Obama but also of the EU. The US electorate has just given us the first part of this double rejection. Now it is up to the EU electorate. And the signs are good.

In the coming year France, Germany, Holland and maybe even Italy get to vote. And in each country “the deplorables” are the majority. European lives may not matter to the North Atlantic elite, but they do matter to ordinary Europeans. And despite what the elites say – it isn’t a case of “racism”. Its common sense. The point is that Lives Matter – Everywhere. Especially the lives of the weak. The ones that are sacrificed in war. The ones that Obama has been sacrificing in his wars. Europe doesn’t want to be another statistic. Neither does Russia. Adios Obama! And take the EU and your time bomb with you.

NOTE: ALL IMAGE CAPTIONS, PULL QUOTES AND COMMENTARY BY THE EDITORS, NOT THE AUTHORS • PLEASE COMMENT AND DEBATE DIRECTLY ON OUR FACEBOOK GROUP INSTALLATION
Aidan O’Brien is a hospital worker in Dublin, Ireland.

Michael Flynn Should Remember Truths He Blurted Out Last Year