Even though the words now may carry some passion, his credibility is badly diminished and there is no proof as yet of a true change of heart inside the administration. 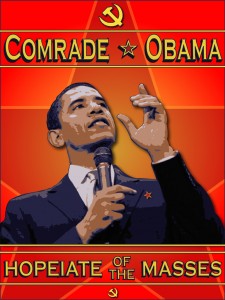 Despite Obama's obvious treachery and surrender to the corporate powers, the deranged Right continues to see in him a left crusader.

APPEARING Monday at Arcadia University in Glenside, Pennsylvania, Obama put on a performance reminiscent of his campaign stump speeches, attempting to work the crowd as a man of the people and vehicle of “change”—in this case, in the realm of health care.

With unrestrained contempt for the intelligence of the American people, Obama switched to his phony “fired up” mode only a week after he gave a speech before the Chamber of Commerce, publicly endorsing the mass firing of teachers and outlining an extremely right-wing education policy.

However, in his half-hour remarks, replete with demagogic attacks on the insurance companies, the president was at pains to conceal the right-wing character of the legislation he is promoting and his contempt for the millions of people who stand to pay for it—both financially and with their health and lives.

After “shout-outs” to various conservative Pennsylvania Democrats in the crowd—Senator Arlen Specter, Governor Ed Rendell, Philadelphia Mayor Mike Nutter—Obama struck the pose of a Washington outsider concerned with the struggles of ordinary Americans.

While politicians were “obsessed with the sport of politics,” he said, “all across America folks are worried about bigger things… They’re worried about the next paycheck, or the next tuition payment that’s due. They’re thinking about retirement.” His administration’s concern for these challenges facing the population, Obama argued, was “why we are fighting so hard to deal with the health care crisis in this country.”

His ensuing remarks combined attacks on the health insurance industry with feigned empathy for the victims of their drive for profit. Utilizing a combination of rhetorical tricks, evasion and outright lies, Obama attempted to argue that the proposals he is championing would improve care, rein in health care costs for working people, and hold the insurance companies accountable.

“We can’t have a system that works better for the insurance companies than it does for the American people,” he said. He referred to Anthem Blue Cross in California, which recently proposed raising its premium rates by nearly 40 percent. “Anybody’s paycheck gone up 40 percent?” Obama asked.

The president gave no explanation, however, of how his health care legislation would actually stop insurers from jacking up premium prices. While individuals and families would be forced to purchase insurance or pay a penalty under his plan, there would be no restrictions on what the insurance companies could charge for coverage. This “insurance mandate” would actually serve to boost insurance company profits.

In his latest proposal, Obama calls only for the establishment of a toothless Health Insurance Rate Authority, which “would issue an annual report setting the parameters for reasonable rate increases based on conditions in the market.” What is considered “reasonable” would invariably be tied to what is profitable for the insurers.

He then made a reference to a recent conference call between Goldman Sachs and an insurance broker, who he said told the investment bankers that insurers “know they will lose customers if they keep on raising premiums, but because there’s so little competition in the insurance industry, they’re okay with people being priced out of the insurance market.”

The reference to Goldman Sachs in relation to curbing profits was particularly cynical coming from Obama, whose administration is stacked with protégés of Robert Rubin, the Goldman executive who served as treasury secretary under Clinton. These include Obama’s chief economic adviser, Lawrence Summers, and Treasury Secretary Timothy Geithner. The basic policies of the administration have been entirely devoted to ensuring the profits of the large banks, including Goldman Sachs.

Medicare, the government-run health care program for the elderly, received first mention from Obama in relation to government spending. “How many more years can the federal budget handle the crushing costs of Medicare and Medicaid?” he asked the audience, making clear that the main aim of his bill is reducing government outlays and reducing the deficit.

He made no mention of the hundreds of billions of dollars to be slashed from Medicare under his proposals, while making the lying claim that reducing costs by going after “waste and abuse in our system, including in programs like Medicare” could be achieved “while protecting Medicare benefits.”

The president related the life stories of a number of people suffering due to the woeful state of the US health care system—Leslie, a single mother trying to put her daughter through college; Natoma, a self-employed cancer survivor forced to drop her insurance due to high costs; Laura, a young mother with breast cancer whose medical bills have plunged her tens of thousands of dollars into debt.

Obama’s utilization of this timeworn technique, first popularized by Ronald Reagan, of exploiting the plight of selected individuals to advance the government’s agenda is particularly despicable in the context of a discussion on health care. The horrible predicaments confronting these individuals and others like them will not be resolved by the provisions of his health care plan, but will in all likelihood be exacerbated.

Even the fig leaf of reform that would have been provided by a “public option” on the exchange where individuals can purchase health insurance has been ditched under pressure from the insurers, who have spent millions of dollars to lobby Congress to oppose any measures that might threaten their profits.

Obama received some boos from his Pennsylvania audience when he voiced his opposition to the so-called single-payer approach to health care. “There were those at the beginning of this process who wanted to scrap our system of private insurance and replace it with a government-run health care system, like they have in some other countries,” he said.

“Look, it works in places like Canada, but I didn’t think it was going to be practical or realistic to do it here.” In other words, any measure that jeopardizes the profits of the giant insurers or pharmaceuticals is unacceptable. In fact, the precise aim of the legislation is to boost their profits, while establishing a class-based system in which health care is rationed for the vast majority.

Obama continued, “I believe it’s time to give you, the American people, more control over your own health insurance.” And how is this to be done?—by building “on the current system where most Americans get their health insurance from their employer.” Here he left out another detail: businesses will be under no obligation to provide insurance to their employees and will pay only nominal fees if their workers receive subsidized coverage.

The fundamental premise of the “current system” of health care is its subordination in every respect to the profit interests of various corporate interests. This framework will be maintained, and in fact expanded, under Obama’s proposals.

The president boasted, “We have now incorporated almost every single serious idea from across the political spectrum about how to contain the rising cost of health care.” Among these are numerous measures targeting “waste and abuse.” These include a task force to combat Medicare fraud and implement cuts, as well as measures to move from a fee-for-service system in Medicare to one where providers are rewarded for reducing care.

Obama has also embraced several Republican-backed measures, including expanding malpractice reform to shield insurance companies from lawsuits, and recruiting medical professionals as spies in undercover investigations of health care providers that receive reimbursements from Medicare and other federal programs. He has adopted these provisions despite the fact that no Republican in Congress supports his legislation or will vote for it.

Obama concluded by calling for swift passage of his health care overhaul. Advancing the notion that the legislation is of an historic, progressive nature, akin to the establishment of Social Security or Medicare, he intoned, “At this moment, we are being called upon to fulfill our duty to the citizens of this nation and to future generations.”

His remarks were aimed mainly at those Democrats in Congress who fear that a vote for the bill threatens their chances at reelection due to growing popular opposition to Obama’s proposals. Increasing numbers of people correctly see the health care legislation as a cost-cutting plan aimed at rationing care for working people and the elderly.

Obama’s stump speech at Arcadia University was a cynical attempt to conceal this reality and press for passage of legislation that will have devastating and far-reaching consequences for the lives of millions of working class families.

KATE RANDALL is a senior political analyst with the World Socialist Web Site.

Fascism Over Farmers? The Troubling Priorities of the...

The War on UNESCO: Al-Aqsa Mosque is Palestinian...

My Response to Bill Clinton: On (My) Liberty...