The last principled man in the Democratic party has now been bulldozed out of the way. 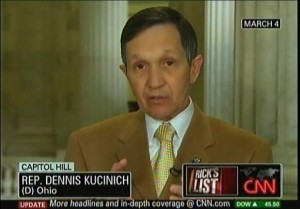 Kucinich had been given an offer that he felt he could not refuse.The Obama administration has finished the job it started in January, 2009: crush the progressive wing of the Democratic Party to clear the way for corporate governance. Rep. Dennis Kucinich’s was the last Left opposition to Obama’s toxic health care legislation. “Once Obama’s private insurers’ bailout bill is in place, it will be almost impossible to dismantle in the foreseeable future.”

“There is nothing for a true progressive to do in Obama’s Democratic Party.”

The last Left Democrat in the U.S. Congress has folded his hand [2], crushed by Wall Street’s servant in the White House, Barack Obama.

Until Wednesday morning, Ohio Congressman Dennis Kucinich was the only opposition from the Left still holding out against Obama’s private insurance subsidy bill – a massive redistribution of wealth [3] to Wall Street masquerading as health care reform. The bill was long ago stripped of any fig leaf of a “public option,” and now awaits passage in its pure form – the formal establishment of a private health care system in which the people are forced to finance the profits of some of the biggest players in the Wall Street casino, the insurance corporations. Far from a step forward towards a society in which health care is every person’s right, the Obama bill is a huge step backward in the opposite the direction from which the entire industrialized world has been traveling. Obama’s so-called reform is in fact, a defeat of the dream of universal health care.

Obama used every trick at his disposal to place that dream out of reach. He pulled a shameless bait and switch on health care, talking the language of universality while conniving to transfer trillions of public dollars to the private insurance industry. Once Obama’s private insurers’ bailout bill is in place, it will be almost impossible to dismantle in the foreseeable future.A trillion dollars buys lots of loyalty. And to make certain that nobody ever gets to cancel the corporate bailout, the Obama regime would prevent states from setting up their own universal health care programs.

“Kucinich was adamant that he had not changed his assessment of the president’s health care proposals.”

Obama knew that, if he were to have any chance to pass a private health insurance subsidy bill, he would first have to bludgeon the Left into submission. In the course of a little over a year, he has accomplished that mission.

To drive Kucinich back to the corporate Democratic reservation, the White House let loose the yapping dogs of the Daily Kos [4] and MoveOn [5], who threatened to back an opposition candidate to Kucinich in his home district. President Obama personally browbeat Kucinich four times in the last several weeks, the last time on Monday night. According to the London Daily Telegraph [5], Obama threatened to refuse to campaign for any Democratic congressperson that doesn’t back his health bill – an invitation to the fat cats to fund challengers to Kucinich in November.

In a Wednesday morning press conference [2] announcing his surrender to the White House, Kucinich was adamant that he had not changed his assessment of the president’s health care proposals. “I do not think it is a first step toward anything I have supported in the past,” he said. “This is not the bill I wanted to support.” But Kucinich had been given an offer that he felt he could not refuse.It was, said the congressman, “a defining moment.”

And it was a defining moment for those who believe there is anything politically worthwhile that can be accomplished within the structures of the Democratic Party, now firmly controlled by its corporate wing. There is nothing for a true progressive to do in Obama’s Democratic Party, but shut up, and roll over. For Black Agenda Radio, I’m Glen Ford. On the web, go to www.BlackAgendaReport.com [6].

Moore losing patience with Obama and the Dems

As phony then as now: Challenging Obama’s Anti-Progressivism

So the DailyKos and MoveOn have drunken the corporate fascist Kool-Aid and are now sell outs, just like the Blue Dog DINO-Fascists within the Democratic Party, and just like 99% of politicians within the Neocon-Fascist Republican Party.

It doesn’t matter to the upper 1% which party is in the majority in Washington, D.C. Just so long as enough politicians sell their souls on the cheap to the K Street lobbyists.

Since Kucinich is not one of those sell outs, he had to be taken down at all costs.

But this war against the middle class is not over, not by a long shot!