Distrust Of US Intelligence Agencies Is The Default Position Of Sanity 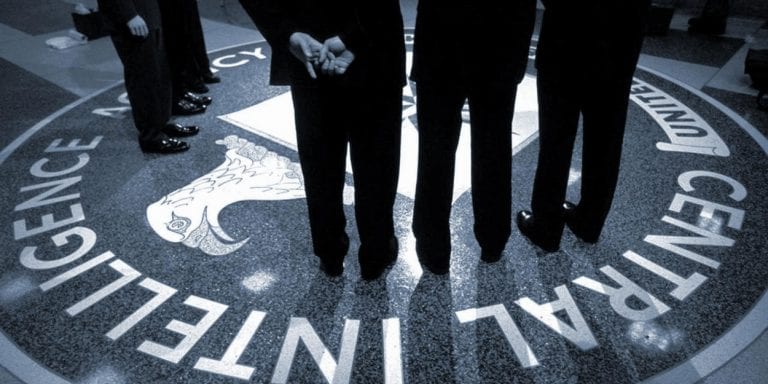 The legendary award-winning investigative journalist Robert Parry has had a stroke. According to his latest article in the always excellent Consortiumnews, the stroke left most of his faculties intact but has robbed him of his vision, which will greatly hinder his ability to publish his insightful analyses with his customary frequency.

While I am very grateful that Mr Parry is still with us and that his condition is far better than it could have been, this is still a great loss for all of us. The voices speaking uncompromising truth in this time of universal deceit are so precious few that any time any of them becomes diminished it’s a tragedy.

Parry had a clean bill of health, never smoked, and never had high blood pressure. He speculated that a possible cause could be how hard he works, adding, “Perhaps, too, the unrelenting ugliness that has become Official Washington and national journalism was a factor.”

An Apology and Explanation
From Editor Robert Parry: For readers who have come to see Consortiumnews as a daily news source, I would like to…consortiumnews.com

Parry wrote about the viciousness with which anyone who questions the CIA/CNN narrative is attacked by the “liberal” mainstream in the age of Trump.

“The hatred of Trump and Putin was so intense that old-fashioned rules of journalism and fairness were brushed aside,” Parry writes. “On a personal note, I faced harsh criticism even from friends of many years for refusing to enlist in the anti-Trump ‘Resistance.’ The argument was that Trump was such a unique threat to America and the world that I should join in finding any justification for his ouster. Some people saw my insistence on the same journalistic standards that I had always employed somehow a betrayal.”

"These agencies have an extensive and well-documented history of lying, torture, sabotage, psyops, staging coups, infiltrating civil rights movements, drug running and warmongering stretching from their creation to the present moment. And yet we’re meant to accept that we are the weird, fringe conspiracy theorists for not taking on faith their still completely unproven say-so..."

I’ve got a much smaller profile than Robert Parry, but even I can attest that the heat you’ll catch from those suffering from Trump hysteria can be intense and overwhelming when you refuse to fall in line with establishment narratives. There were times last year where I would have surely had my creativity snuffed out by the endless deluge of vitriol were it not for my husband’s tireless assistance and a few helpful spiritual practices I’ve picked up over the years, and it wouldn’t have surprised me if I’d ended up having a stroke myself otherwise. It’s a lot of toxic energy to have coming at you on a regular basis, and if you’re a leaned-in poetical type like me who deeply feels life, it’s like getting slammed by an energetic tidal wave day in and day out.

And all that hatred ultimately comes at us as a result of having expressed skepticism about unproven assertions made by the US intelligence community, which is the most sane, neutral, unbiased position that anyone could possibly have about anything. These agencies have an extensive and well-documented history of lying, torture, sabotage, psyops, staging coups, infiltrating civil rights movements, drug running and warmongering stretching from their creation to the present moment. And yet we’re meant to accept that we are the weird, fringe conspiracy theorists for not taking on faith their still completely unproven say-so which is the only thread holding the establishment Russia narrative together.

The Still-Missing Evidence of Russia-gate
The central groupthink around Russia-gate is the still unproven claim that Russia hacked Democratic emails in 2016 and…consortiumnews.com

As Jiddu Krishnamurti famously said, it is no measure of health to be well adjusted to a profoundly sick society. The fact that those of us who see the US intelligence community, the mainstream media, and the oligarchs they support for what they are happen to be in the minority does not make us the oddball extremists. The majority who swallow the CIA/CNN narrative hook, line and sinker are the delusional cultists. Those of us who remember the lead-up to the Iraq invasion and say “Yeah we’re gonna need more proof before we buy into that story” are inhabiting the center of the wheel. We are the moderates in this debate.

And now, after the Democrats completely eschewed all critical thinking about US intelligence and defense agencies, the Republicans appear to be gearing up for another regime change intervention in the Middle East. The Washington Free Beacon reports that the Trump administration is working to incubate the “nascent Iranian revolution”:

The Trump administration is keeping a close eye on the growing protests in Iran, with senior administration officials working to ensure President Donald Trump does not miss an opportunity to incubate a possible revolution that could topple Iran’s hardline ruling regime, according to White House officials who spoke to the Washington Free Beacon.

If this report is accurate (and it’s worth noting that Washington Free Beacon is a very conservative, Trump-supporting outlet), it goes without saying that the US intelligence community will be actively involved in fanning the flames of bloodshed and extremism in Iran just like it did with Libya and Syria. Already we’re getting reports of highly suspicious attacks on banks and false flag police shootings in that nation, as well as terrorist groups being cheered on by the US media, and who knows who could be behind all that. Could it be the US intelligence community? Of course! But who’s left to ask those kinds of questions now? It is a known fact that the CIA has already cranked up operations against Iran in the last year, but who remains to question the motives and behaviors of the CIA?

The few still willing to speak out who the Democrats have spent the last year attacking, undermining, and giving fucking strokes to. That’s who.

CIA Creates New Mission Center to Turn Up the Heat on Iran
The Central Intelligence Agency has established an organization to gather and analyze intelligence about Iran…www.wsj.com

Stand confident in your truth, dear reader. Don’t let them drag you down. Don’t let them kill your voice, snuff out your spark or ruin your health. You are standing on the only solid ground there is in this debate. Plant your feet firmly, stand tall, and shout loud.

Thanks for reading! My work here is entirely reader-funded so if you enjoyed this piece please consider sharing it around, liking me on Facebook, following me on Twitter, bookmarking my website, throwing some money into my hat on Patreonor Paypal, or buying my new book Woke: A Field Guide for Utopia Preppers.