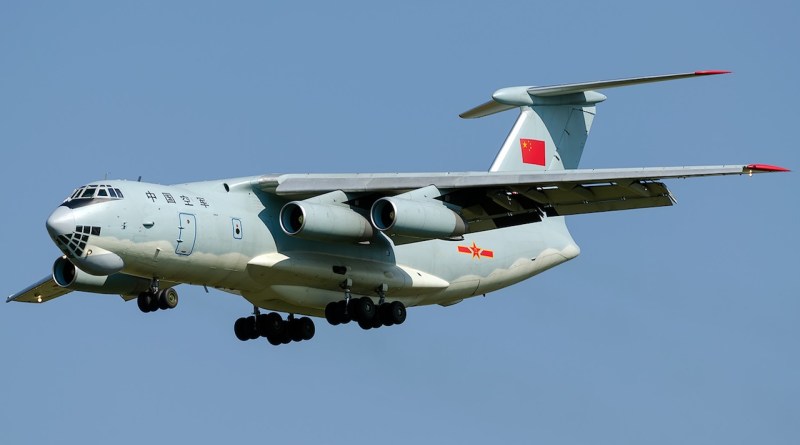 Soviet-designed IL-76 in service with China's PLA air force. The IL-76 made its first flight in March of 1971.

November 18, 2019 –
One of the reasons for the destruction of the Libyan state and the death of Colonel Qaddafi himself was the desire to sit “on two chairs”, the desire to get support and guarantees not only from Russia, but also from the West. Therefore, when there was a real threat to Libya and its leadership, Qaddafi hesitated for a long time in a situation requiring quick and decisive action. The result of these fluctuations is known.

With Syria, everything was different. Assad did not hesitate for a long time and turned for help to the only reliable allies – Russia and Iran. At the initial stage of the operation of the Russian military in Syria, in August-October 2015, the country’s leadership was faced with the problem of quickly, covertly and safely transferring the necessary forces and means to a remote theater of operations. At the first stage, the need for the organization of the Russia-Syria aerial bridge “clearly emerged.”

On the technical side, this decision was fully ensured: the existing air fleet (about 100 Il-76 military transport planes and nine heavier An-124s) was enough to transfer 50% of the most needed equipment. However, with the provision of an air corridor for the flight of these Russian aircraft visas to Syria, problems arose.

Image 1: “Who is ready to allow Russian military cargo to Syria” 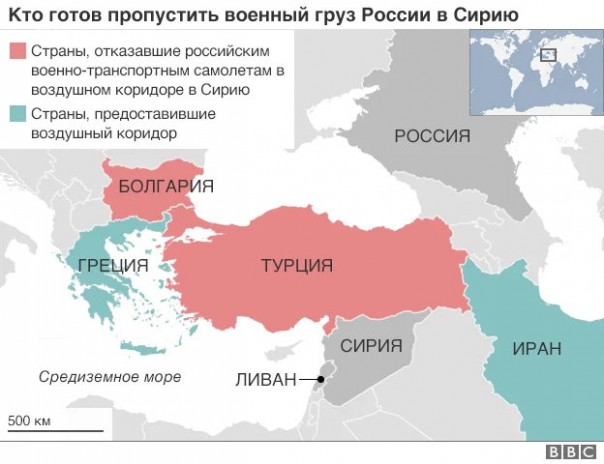 Looking at the map of the region, you understand that the shortest air route to Syria from Russia passes over Turkey. However, this route was immediately rejected over the “difficult” relationship between Erdoğan and Assad. In addition, relations between Russia and Turkey by this time were complicated due to the forced landing in Turkey of a Russian plane flying to Damascus with military cargo for air defense systems.

– over the neutral waters of the Black Sea, through Romania, Serbia, Macedonia and Greece.

– over the neutral waters of the Caspian Sea through Iran and Iraq.

Romania almost immediately announced that “we won’t allow Russian planes to pass.” Bulgaria immediately joined it, although nobody asked it about possible flight paths. As always, Bulgaria, in a difficult moment, showed its rotten core.

A last route remained – through Iran and Iraq. The establishment of an air corridor to Syria required big political and diplomatic efforts. Iran’s consent was not difficult to obtain, as it was interested in the strengthening Russian help to Syria. The Russian Embassy in Tehran quickly received permission for all requested flights of Russian planes. Moscow and Tehran then established close contacts on this given question. 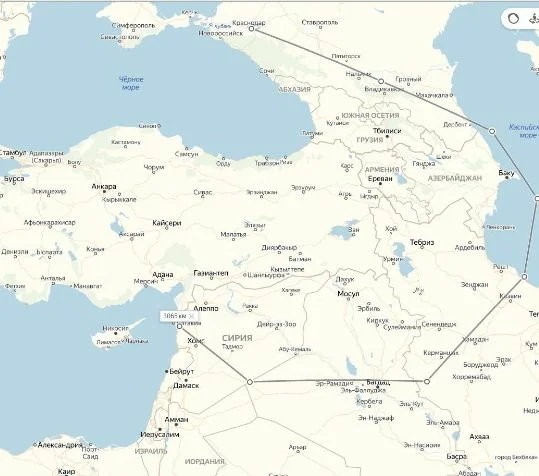 But with Iraq everything turned out to be very, very complicated. The Americans were still very strong in Baghdad and had serious leverage over the ruling elite of the country; they could not only block financial and military assistance to Iraq, but also introduce serious sanctions against it. The US State Department, personally Secretary of State John Kerry, was squeezing Iraq with frightening force.

Kerry demanded that the Iraqi leadership force all the aircraft flying from Iran to land and conduct a thorough search of them by the Iraqi police and US intelligence agencies.

However, Iran’s influence on Baghdad was even stronger – since the spring of 2012, an Iranian aerial bridge was organized across Iraq, through which Iranian C-130 transport planes regularly transferred weapons and equipment to Syria. And the US could do nothing with this corridor. All they had achieved was a short-term flight ban for the Iranian Air Force, but it lasted only 2 months.

Therefore, in organizing the flight of Russian military transport planes through Iraq, recent Iranian developments had to be used. In addition, Russia provided Iraq with serious military-technical assistance.

The Russian air corridor through Iran and Iraq was earned in August 2015. From August 18 to August 24, 2015, our specialists renovated the Khmeimim airfield. On August 24, our first airbase supply group arrived in Khmeimim – 24 people. And on September 10, the main staff arrived – 298 military servicemen. On September 30, the air group at Khmeimim was fully formed. This allowed the Russian military to begin the planned operation to rescue the Assad government and then provide a turning point in the Syrian war.

Thus, the Syrian campaign has become a kind of indicator for Russia to assimilate the “Libyan experience.” It was the Libyan events that forced the governments of Russia, Iran, Iraq, Syria to act in a fundamentally different way than it was in solving the “Libyan issue.”

The Essential Saker III: Chronicling The Tragedy, Farce And Collapse of the Empire in the Era of Mr MAGA