The task for our side is to find tactics to educate and mobilize people effectively.  It can be done, because despite the huge edge that the system enjoys through its treacherous media, we have truth, reality, on our side, and that can’t be denied indefinitely. 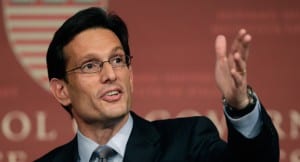 Professional misleaders like Eric Cantor will have to be neutralized with counter information and mobilization campaigns of our own.

If just 10% of a social network is strongly committed to an opinion, that’s enough to rapidly convert the uncommitted 90% to adopt their point of view, say researchers who used computer models to discover the tipping point where a minority view becomes the majority opinion.

“This is true not only for important opinions, like political views,” says Boleslaw Szymanski, SCNARC’s director and a distinguished professor at RPI. “It also applies to everyday decisions like, for instance, whether to buy a PC or a Mac or what fashion to wear or what movie to see. The spectrum of potential applications here is very, very broad.”

The aim of SCNARC, which focuses on broad fundamental questions pertaining to social networks, is to look at what factors influence the spread of opinions within those networks.

“One application might be a campaign in rural Africa where there is a high prevalence of disease carried by mosquitoes, yet people are reluctant to purchase mosquito nets,” explains SCNARC research associate Sameet Sreenivasan. “If just 10% of that population were committed to using nets—and if they spread positive messages about their use—that could easily tip over the entire community toward using them.”

And so, he says, rather than campaigns trying to influence every single member of a community, “it might be enough to just influence a percentage—which we call ‘the tipping point’—after which the entire social network does the job of converting everyone else toward being a believer.”

The researchers’ findings are also relevant to those involved in computational technology innovation, according to Szymanski, where new ideas aren’t always accepted—not because they aren’t improvements but because it is difficult to overcome inertia.

“What we are saying is that there’s no need to convince the entire community,” he explains. “It is much better to make a strong effort to enlist just 10% and then let the network do the rest of the job.”

At Northwestern University’s Kellogg School of Management, Daniel Diermeier says he finds SCNARC’s findings “very interesting” and has “no doubt that committed minorities can have an impact on public opinion.”

Diermeier, the school’s IBM Distinguished Professor of Regulation and Competitive Practice, has worked, too, on using models in statistical mechanics and complex systems to study the spread of public opinion. “More and more, social media is playing an important role in shaping the perceptions of customers,” he says, “as well as in the political domain.” Which is why, he says, he isn’t surprised that SCNARC’s research is partly funded by the U.S. Army Research Laboratory, the Army Research Office, and the Office of Naval Research.

“The Defense Department wants to know how public perception is formed through network communication,” he says. “It wants to understand, for example, how the revolts in the Middle East took place because they have a very limited knowledge about how these things occur. It is part of the overall national defense effort in the war on terrorism.”

Meanwhile, Szymanski says the next step in SCNARC’s research is to enrich the model by gathering additional social network data. He urges those who would like to collaborate with the researchers to contact the center.

The War on the Planet