[su_panel background=”#e6f1f6″ color=”#1d1919″ border=”2px solid #150000″ shadow=”7px 0px 1px #eeeeee” radius=”2″]Did you happen to notice that after more than a decade of the ‘news’ media’s demanding publication of “the missing 28 pages” (which turned out actually to have been 29 pages) from the U.S. Congress’s investigation into 9/11, the document’s press-coverage, finally, on 15 July 2016, turned out to have been little-to-none? And did you notice that the little there was, said it contained nothing important? Perhaps you didn’t get to know even this much about the press-coverage of it, because the U.S. Congress, which had been hiding the document ever since 2003, dumped it on a Friday night, in order for it to receive as little press-coverage as possible.[/su_panel] 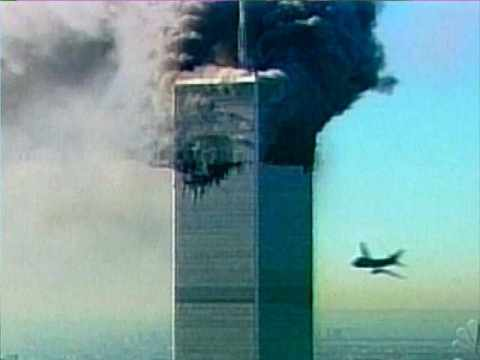 Well, what that document actually showed, and proved (and cited FBI investigators who could then have testified in public, if requested), was the opposite of unimportant: that the Saudi Ambassador to the United States, Prince Bandar bin Sultan al-Saud (who was known in Washington as “Bandar Bush,” because of his closeness to the Bush family), had secretly been paying the Saudi handlers of at least two of the 15 Saudis among the 19 9/11 hijackers, and that Bandar’s wife and other relatives were also paying those hijackers-to-be, and their families — thus enabling the future hijackers to obtain the necessary pilot-training etc., for the 9/11 attacks.

How much news-coverage of this was there in the U.S.’democracy’ that is supposed to be informing the public about such things, instead of continuing the cover-ups of them?

Why do U.S. ‘news’ media hide it — after having demanded for more than ten years that the ‘missing 28 pages’ become published? 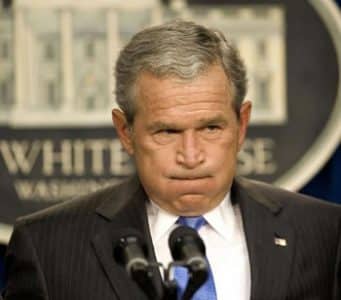 G.W. Bush: clearly a criminal at large by any elementary juridical standard.

G.W. Bush: clearly a criminal at large by any standard of juridical decency.

But that’s not all there is to the cover-up: As I mentioned and documented in my July 20th news-report on “9/11: Bush’s Guilt and the ’28 Pages’,”  U.S. President George W. Bush was also involved in the 9/11 operation: He had instructed his National Security Advisor Condoleezza Rice to block his obtaining from U.S. government sources any specific information about what the attacks would entail, or about the date on which they would occur. (Presumably, he already knew, via his private communications with Prince Bandar or someone else who was in on the event’s planning, all that he had wanted to know about the coming event.) When CIA Director George Tenet, on 10 July 2001, was practically screaming to Rice to allow him into the Oval Office, to meet privately with the President to inform him of how urgent the situation had become to take action on it, she said: “We’re not quite ready to consider this. We don’t want the clock to start ticking.” Tenet was shocked, and dismayed. That encounter with Rice was intended to urge the President to establish a hit-team to take out bin Laden, so as to avert the operation — whatever it was, or would turn out to be. The way that Chris Whipple put this, in his terrific report in Politico magazine, on 12 November 2015, titled “The Attacks Will Be Spectacular”, was that, “they did not want a paper trail to show that they’d been warned.” 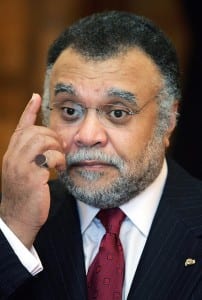 Apparently, “Bandar Bush” knew the details, but his friend George W. Bush did not — Bush needed “deniability” — it’s not for nothing that he was able to say, after the event, as Condoleezza Rice was to put it when speaking to reporters on 16 May 2002, “This government did everything that it could in a period in which the information was very generalized, in which there was nothing specific to react to … Had this president known of something more specific, or known that a plane was going to be used as a missile, he would have acted on it.”

How does she now square that statement with her having told Tenet, on 10 July 2001, “We’re not quite ready to consider this. We don’t want the clock to start ticking.”? What ‘clock’? Why not? No one asks her — especially not under oath.

Is that the way things happen in a democracy, even 15 years after the event? 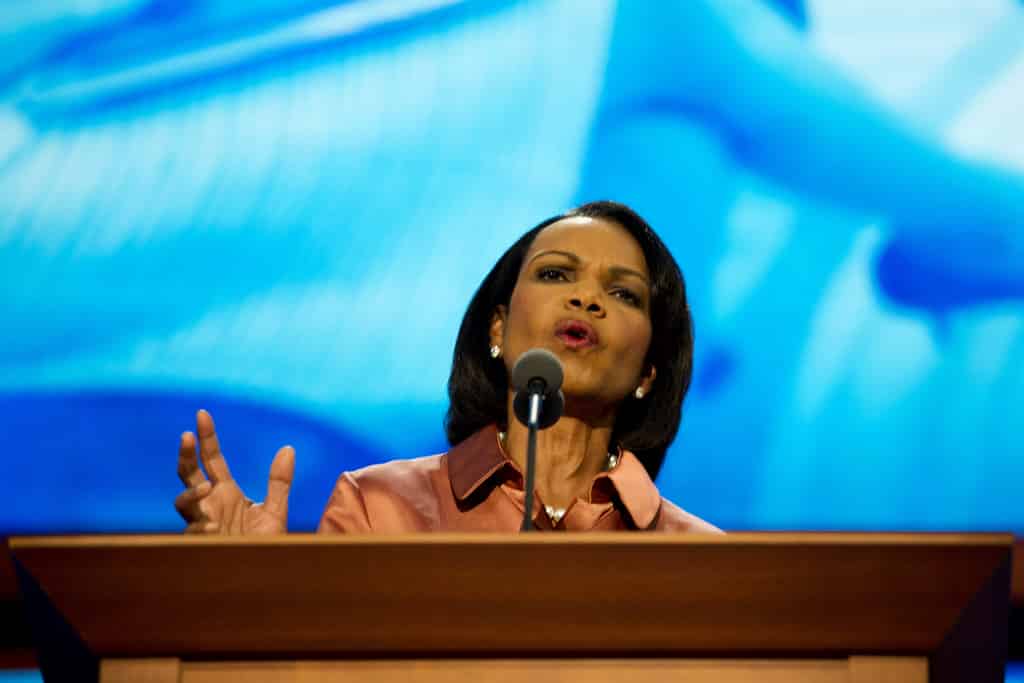 Condoleezza Rice is one of the small circle of people who definitely knows much more than she has told about 9/11—so why is she not pressed to talk? Who protects her? No need to answer that. Just a rhetorical question. Photo by NewsHour

[dropcap]O[/dropcap]n 10 September 2012, Kurt Eichenwald, who had reported for The New York Times, was then issuing his new book on the aftermath of the 9/11 attacks, 500 Days: Secrets and Lies in the Terror Wars, and he headlined an op-ed then in his former newspaper (which thus could hardly have declined to accept it), “The Deafness Before the Storm”, describing the most puzzling aspect of the lead-up to 9/11:

It was perhaps the most famous presidential briefing in history.

On April 10, 2004, the Bush White House declassified that daily brief — and only that daily brief — in response to pressure from the 9/11 Commission, which was investigating the events leading to the attack. Administration officials dismissed the document’s significance, saying that, despite the jaw-dropping headline, it was only an assessment of Al Qaeda’s history, not a warning of the impending attack. While some critics considered that claim absurd, a close reading of the brief showed that the argument had some validity.

That is, unless it was read in conjunction with the daily briefs preceding Aug. 6, the ones the Bush administration would not release. While those documents are still not public, I have read excerpts from many of them, along with other recently declassified records, and come to an inescapable conclusion: the administration’s reaction to what Mr. Bush was told in the weeks before that infamous briefing reflected significantly more negligence than has been disclosed. In other words, the Aug. 6 document, for all of the controversy it provoked, is not nearly as shocking as the briefs that came before it.

Those “briefs” still are not published. And now, after the revelation, by Chris Whipple, that Condoleezza Rice was under instruction from her boss not to allow him to be informed too early for “the clock to start ticking,” we can understand why there is still so much that hasn’t yet been released to the public, in our ‘democracy’, about who was really behind 9/11.

On 17 April 2016, Paul Sperry in the New York Post headlined “How US covered up Saudi role in 9/11”, and he reported that his own investigation showed: “Actually, the kingdom’s involvement was deliberately covered up at the highest levels of our government. And the coverup goes beyond locking up 28 pages of the Saudi report in a vault in the US Capitol basement. Investigations were throttled. Co-conspirators were let off the hook.” But isn’t it time, now, to demand that Bush’s role also be explored — not only that the Saud family’s (especially Bandar’s) role in it be prosecuted? After all, Bush was the one who took a Presidential oath.

Or: Is the U.S. not enough of a democracy, for that to happen — for the Constitution to be enforced, by the U.S. President after Bush (the President who will not prosecute his intended successor)? How total must the non-accountability at the top be, before we call the country a “dictatorship” — only a fake ‘democracy’?

Regarding the actions that brought down the three World Trade Center Buildings, WTC1, WTC2, and WTC7, there also is good reason to distrust the official ‘history’. Witness accounts both by firefighters and by the general public were videoed at the time saying that they heard multiple explosions, which indicated controlled demolitions after the two plane-crashes into WTC1 and WTC2. Other witnesses of the WTC7 collapse also heard explosions. Regarding WTC7, there was testimony from the owner of the WTC, Larry Silverstein, saying that he instructed the Fire Department not to go into WTC7 but simply to “pull it.” (And his subsequent statement saying he didn’t really mean that and he meant only to “pull” the firefighters from that building, which actually had none, was debunked.) Even the government’s “Final Report on the Collapse of World Trade Center Building 7” acknowledged (p. 48) that there had been “(2) a freefall descent over approximately eight stories of gravitational acceleration for approximately 2.25 s[econds]” meaning that that 8-story segment had been blasted so that, throughout those 8 stories, there was zero resistance to the collapsed portion falling through it from above. This alone constitutes solid and conclusive physical proof of the official lie, though itself published in the official source. And yet on the very next page in that official document is stated, “Blast events did not play a role in the collapse of WTC 7. … There were no witness reports of such a loud noise.” But there were such witness reports; and, anyway, the very admission (on the prior page) that there was free-fall over an 8-story segment of the building, constitutes acknowledgement of physical proof that there had been controlled demolition on WTC7. Further, there has even been expert testimony that nano-thermite was used to bring down each of these buildings. But clearly, whatever the truth of the matter is, the U.S. Government has been lying, and continues to lie, about 9/11. For at least the past 16 years, we’ve been living in a dictatorship. And the evidence suggests that this has been the case ever since at least 1981.

Mr. Zuesse does not mention that the release of the “28 pages” is a government ploy known as “limited hang-out” whereby said release detailing Saudi involvement thereby conclusively closes the case and no further investigation is required. This places the entire blame on “Saudi support of Al-Queda terrorists” and absolves the US and Israeli governments of any responsibility, when in actuality there is an abundance of evidence now in the public domain that demonstrates beyond doubt the complicity of both governments in this crime in order to provide a pretext for an unlimited “war on terror” in the Middle East which metastasized into a “war on civil liberties” in the US and Europe.