On September 1, 1939, German radio announced the outbreak of the Second World War by reporting Adolf Hitler’s speech to the Reichstag, in which the dictator said, “This night for the first time Polish regular soldiers fired on our own territory. We have been returning the fire since 5:45 A.M. Henceforth, bomb will be met with bomb.”

Under the direction of Minister of Propaganda Joseph Goebbels, the invasion of Poland was portrayed as an act of self-defence.

Theresa May is a filthy, lying conservative, but a laborite would have probably acted the same, as the whole system is rotten from top to bottom. These kinds of people should be tried for deliberately pushing the world toward genocidal wars.

A similar resort to lying and demonization has been carried out by the British, American and several European governments around the March 4 poisoning in Salisbury, England of former Russian double agent Sergei Skripal and his daughter, Yulia.

It is now beyond any reasonable doubt that the claims of the Conservative government of Theresa May charging Russia with responsibility for the poisoning of the Skripals are fabrications.

On Tuesday, Gary Aitkenhead, chief executive of the UK’s chemical weapons facility, the Porton Down Defence Science and Technology Laboratory, told Sky News that scientists had “not verified the precise source” of the material used in the attack in Salisbury on March 4. Aitkenhead’s statement came on the eve of the convening at Moscow’s request of the Organisation for the Prevention of Chemical Weapons (OPCW) at The Hague, which would have exposed the UK government’s case. But this resort to damage control only underscores the monstrous hoax perpetrated by the British and American governments and their European allies.

May told parliament on March 12 that Porton Down was “absolutely categorical” that the “nerve agent” used on the Skripals had come from Russia. “Based on the positive identification of this chemical agent by world-leading experts at Porton Down,” she said, “the government has concluded that it is highly likely that Russia was responsible” for an “attempted murder” on British soil.

Foreign Secretary Boris Johnson told German broadcaster Deutsche Welle on March 20 that “the people from Porton Down” were “absolutely categorical” that the source of the nerve agent used against the Skripals was Russia. “I asked the guy myself,” he said, “and he said ‘there’s no doubt.’”

So politically devastating is the exposure of Britain’s lies that yesterday the Foreign Office deleted a text it sent out on March 22 declaring that the “analysis by world-leading experts at the Defence Science and Technology Laboratory at Porton Down made clear that this was a military-grade Novichok nerve agent produced in Russia.”

Based on this lie, and without asking for any proof other than the word of May and Johnson, the United States, 14 European Union member states, Ukraine, Canada, Australia and three other allies between them expelled more than 100 Russian diplomatic personnel. The NATO military alliance followed suit, expelling seven Russian staff to send “a clear and very strong message that there was a cost to Russia’s reckless actions.”

Every one of these states knew from the outset that the allegations against Russia were a fraud. Even though Britain’s supposed case against Russia has fallen apart, this has had no impact on the backing it has received from its imperialist allies.

The emergency session of the OPCW called at Russia’s request received no answers to the serious questions Moscow insisted Britain had to address. Instead, the UK’s representative said Russia could not take part in a joint investigation with Britain into the Skripal affair, as it was “a likely perpetrator.” This was given unqualified backing by an EU spokesperson, who demanded that Russia respond to the UK’s “legitimate questions” about its alleged continued production of novichoks. 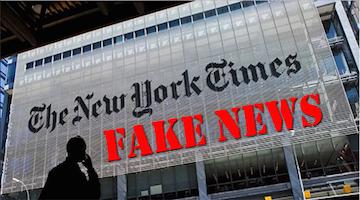 No less implicated in this criminal affair is the corporate media, especially the New York Times, which has spent the past month disseminating the raw propaganda issued by London and Washington and baying for Moscow’s punishment.

At no point did the Times raise a single question about the reliability of the claims of the May government. And now its response to the refutation of the lies is to ignore and bury Aitkenhead’s statement.

The role of the corporate media in the Skripal provocation confirms the political purpose of the hysterical campaign it has been leading against “fake news,” and its insistence that social media be regulated, restricted and monitored.

After the Skripal affair, is any more proof required that nothing the officially sanctioned media publishes or broadcasts can be taken at face value?

It denounces any questioning of the imperialist narrative as “fake news,” while it carries out its function of publishing false and lying reports.

As Leon Trotsky wrote 80 years ago, the lie is the ideological cement of social and political reaction. The World Socialist Web Site is an indispensable and powerful tool of the working class in combating the lies of the imperialist powers and their state-controlled propaganda machines.

In January, the World Socialist Web Site issued an open letter to socialist, anti-war, left-wing and progressive websites, organizations and activists calling for the formation of an international coalition to fight Internet censorship. Recent events attest to the importance of this critical initiative.

ABOUT THE AUTHOR
The author works for wsws.org, a Marxist publication.