Christian Right Group Spokesman Rails Against Grizzly Bears: It’s Us or Them

The mental rot of religiosity at work: 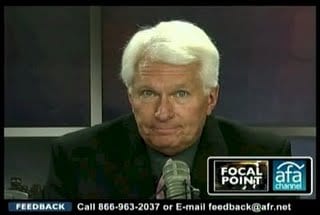 Having successfully stopped people from being gay, the American Family Association’s Bryan Fischer is taking on another moral scourge: grizzly bears. The weird AFA spokesman, who has compared Muslims to Nazis, suggested a Sea World Killer Whale be stoned, and likened gay sex to domestic terrorism, has penned a blog post obliquely calling for some sort of grizzly bear genocide  (flagged by Kyle at Right Wing Watch). Says Fischer:

••••
One human being is worth more than an infinite number of grizzly bears. Another way to put it is that there is no number of live grizzlies worth one dead human being. If it’s a choice between grizzlies and humans, the grizzlies have to go. And it’s time.
••••
God makes it clear in Scripture that deaths of people and livestock at the hands of savage beasts is a sign that the land is under a curse. The tragic thing here is that we are bringing this curse upon ourselves.
Fischer’s disturbed rants would just be funny, were it not for AFA’s reach and clout: the Christian group owns 180 radio stations and publishes a magazine with a circulation of 170,000. They claim over 500,000 members, 2.5 million supporters and a 20 million dollar annual budget. Some of that money was recently used to undermine Iowa’s judicial process; AFA was instrumental in a successful campaign to oust 3 Iowa judges who voted to legalize same-sex marriage in the state.
The AFA is also one of those groups that prominent GOPers pander to — and help legitimize — when they’re trying to score points with “values” voters. (At the last Values Voter Summit Fischer shared the stage with Mitt Romney, Mike Huckabee, and Michele Bachmann.)
—
Tana Ganeva writes for AlterNet.
________
BONUS FEATURE

Who needs the Taliban when we have mean-spirited criminal reactionaries like these around?