Home NATO GANGSTERISM NATO’s Expansion Would be a Huge Mistake

NATO’s Expansion Would be a Huge Mistake 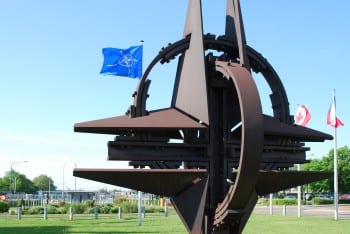 [N]ATO’s Secretary General Anders Fogh Rasmussen made an announcement this week that North Atlantic Treaty Organisation (NATO) is for the first time looking to deploy its forces at new bases in Eastern Europe, in response to the Ukraine crisis and in an attempt to deter Russian President Vladimir Putin from “causing trouble in the former Soviet Baltic republics”. He added that the organisations’s summit in Wales on 4 to 5 September 2014 will aim to form an agreement between NATO’s members to send forces from the military alliance to Russia’s borders.  Far from deterring Putin, this move would in fact be a grave mistake and a terrible blunder from the West.

During a time of crisis, when Russia’s relationship with the West is at its lowest point since the Cold War, engaging in an offensive move that involves building new permanent NATO bases in Eastern Europe is a counter-productive move that further escalates an already precarious situation. NATO would be mistaken to assume that such a move would not jolt Russia to enact its own counter-measures that aim to protect its national interest and security. Western leaders argue that they have no choice but to utilise NATO to deter Russia from encroaching on other states in Eastern Europe, especially after NATO have claimed that Russia has around 1000 troops in Ukraine. But Russia will not accept this argument for the following reasons. Firstly, the Kremlin believes that it is not Russia, but the West that is responsible for the Ukrainian crisis. Moscow had no choice but to respond to the conflict on its border. As professor Stephen Cohen said in his interview with CNN, President Putin did not start the conflict, but has a responsibility to restore Russia’s traditional zones of national security on its borders. To Putin, and Russia as a whole, a Ukraine that is vehemently anti-Russian and pro-Western is a threat to Russian security, not least because Ukraine itself might join NATO one day. Putin was not pre-planning to take back Crimea and he certainly was not aiming to create instability in eastern Ukraine. As Professor John Mearsheimer stated in his article in Foreign Affairs magazine, those who believe Putin is aiming to “re-create a new Soviet Union” are completely misinterpreting the events. If Putin wanted to create a greater Russia, he would have laid the foundations for this long ago. But there is no evidence that he was considering taking Crimea or other parts of Ukraine. Instead, Russia is looking after its core interest. Therefore, NATO’s argument that its proposed expansion is a response to Russia’s “aggression” and potential future land grabs is flawed, because Russia is acting defensively, rather than offensively.

In addition, NATO’s potential expansion would confirm Kremlin’s fears that the ultimately objective of the Western military alliance is to surround Russia and encroach as close as possible to Russia’s border. Though NATO denies this claim, it hasbroken its promise to Russia many times in the past. After the end of the Cold War, Mikhail Gorbachev reportedly agreed to allow German reunification within NATO after being promised that NATO would not expand “one inch to the east.” Instead, in 1999, Poland, Hungary, and the Czech Republic joined the organisation. Another expansion came with the accession of seven Central and Eastern European countries: Estonia, Latvia, Lithuania, Slovenia, Slovakia, Bulgaria, and Romania. These nations were first invited to start talks of membership during the 2002 Prague summit, and joined NATO on 29 March 2004, shortly before the 2004 Istanbul summit. Most recently, Albania and Croatia joined on 1 April 2009, shortly before the 2009 Strasbourg–Kehl summit. Other countries which have a stated goal of eventually joining include Bosnia and Herzegovina, Montenegro, and Georgia.

From Russia’s point of view, NATO’s growth since the end of the Cold War continues for no other reason but to suffocate Russian borders with military bases. Moscow frequently asked why, if the West and Russia are no longer Cold War foes, NATO feels the need to continue to exist and to expand.  The West never gave a satisfactory response, thus feeding into Putin’s beliefthat NATO is on a mission to encircle Russia. The recent EU and US involvement in Ukraine only exacerbates this view.

Ultimately, Russia is not about to unleash its army on Eastern Europe looking to accumulate more land into its territory. It will, however, react to NATO’s proposed expansion, resulting in further insecurity on the European continent and unnecessary arms race.

In fact, NATO’s expansion is likely to galvanise Russia to speed up its own attempt to build up a regional military alliance with the members of the Customs Union (to become a Eurasian Economic Union on 1 January 2015), China and perhaps even Iran. The Shanghai Cooperation Organisation (SCO) currently includes China, Kazakhstan, Kyrgyzstan, Russia, Tajikistan, and Uzbekistan.  There has recently been renewed discussion of the possible expansion of the group beyond the six members it has had since its founding. The SCO’s annual summit that will be held in Dushanbe in September 2014 will apparently be used to finalise an agreement on protocols for accepting new members. Afghanistan, India, Iran, Mongolia, and Pakistan are currently all observers, and India, Iran, and Pakistan in particular have been outspoken for many years about their desire to join as full members.

This week, the Shanghai Cooperation Organisation held its biggest joint military exercises ever. The scale of the exercises suggests that the organisation, which had lately seemed to be focusing more on economic and law enforcement cooperation in Central Asia, may indeed be on a path to incorporating a military component. 7,000 troops from five countries were in China as part of the SCO’s “Peace Mission 2014” military drills. It included troops from China, Russia, Kazakhstan, Kyrgyzstan and Tajikistan in what Chinese media called “the largest SCO drill yet”.

NATO’s rejuvenated attempt at building new bases in Eastern Europe is likely to speed up the process of transforming the SCO into a full military alliance. A potential stand-off between the two competing military organisation would then be likely, resulting in high tension and a return to Cold War mentality for both sides.

Talks, not military expansion is the only solution

With trust between NATO and Russia at rock bottom, a quick-fix solution to the crisis is non-existent. However opening up real channels of communication between Russia and the West is still possible. It must be remembered that it is in the interest of both sides to cooperate on issues that matter to both sides: countering international terrorism, promoting nuclear non-proliferation, enabling space exploration, fighting cybercrime, finding a joint solution to the violence in the Middle East and tackling climate change. These areas should be used to start re-building trust between the two sides. Building new NATO bases in Eastern Europe would all but end any possibility for a dialogue, resulting in a long-term stand-off between East and West. Such an outcome would not be beneficial to either side.

Alexander Clackson is a London-based political consultant, commentator and analyst, he is the founder of Global Political Insight, and a frequent contributor to think-tanks and media outlets, especially for the online magazine “New Eastern Outlook”.