Home AMERICAN DUPLICITY The Impeachment of President Donald J. Trump: Hoist by his Own Petard — The Briefest of Histories

The Impeachment of President Donald J. Trump: Hoist by his Own Petard — The Briefest of Histories

Special to The Greanville Post | Commentary No. 51: “The Impeachment of President Donald J. Trump: Hoist by his Own Petard — The Briefest of Histories”

PLEASE NOTE THAT WHAT FOLLOWS IS A FORM OF “PROJECTED HISTORY” BY OUR AUTHOR. IT FOLLOWS A POSSIBLE SCRIPT IN THE SAGA OF DONALD TRUMP AS HE STRUGGLES MIGHTILY TO OVERCOME HIS EGO AND AVERSION TO DISCIPLINED THINKING BEFORE SUCH INDOLENCE AND CONCEITS TRIGGER THE IMPLOSION OF HIS PRESIDENCY. 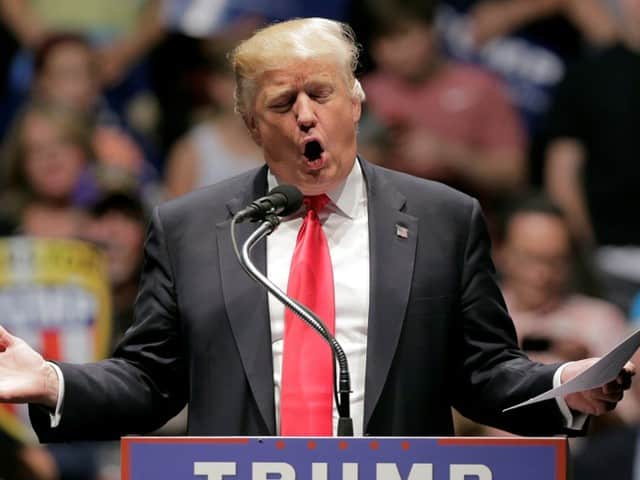 Dateline: Sometime in the summer of 2017.

As is well known, even after the Great Rearrangement of Trump (not of his hair, but of his outward persona) that took place in August of 2016, there was little expectation that Mr. Trump would be able to win the Presidency.  The list of his political peccadillos had grown to be endless.  Chris Hayes, a political commentator for MSNBC, kept a list of the “Last Ten Trump” gaffes, blunders, political wall-bangers and what have you.  Hayes characterized them as “Things Trump Has Done That Would Have Ended Any Other Campaign.”  However, shortly after the “Gold-Star mothers/Khizr Khan/relations with the Russians” debacles of late July, there came to be a huge gathering of campaign staff, RNC staff, and perhaps most importantly, family.  After what was by all accounts a very intense weekend, Trump’s behavior slowly began to change.

Of course, no one knows to date exactly what went on in the series of meetings that were held, with and without the candidate.  As is well-known, the best guess to date as to what went on goes something like this.  First, it was established that Mr. Trump really did want to be President, not just look towards raking in the millions that would come from his next book, win or lose.  Second, family members finally got him to pay attention to the “behavioral concerns” that concerned everyone else in the room.  Third, and this is only on speculation of the most speculative kind, it is possible that Mr. Trump, because he really did want to be President, agreed to go on medication.

Whatever it was, his behavior did change.  But his standing in the polls didn’t.  He had already done so much damage to himself, that only his “base” that had gathered around him from the early days of the Republican primaries, continued to stand by him.  The process remained the same.  Regardless of what he did or had done, regardless of how many lies he told (and that did not stop with the “new Trump”) his acolytes stood by him.  Trump proved at that time, that for a significant minority of U.S., race and an undefined anger at the White, liberal-dominated, PC-directed status quo—trumps everything.  And, and big GOP money finally started rolling in, except, for some reason, that of the Kochs. (It must be noted, nonetheless, that the Kochs, by now at last acutely aware of their notorious bad image, may have decided to make their political purchases under the table, with money flowing to BOTH candidates, which is essentially a standard operating procedure for many tycoons and corporations).

[dropcap]B[/dropcap]ut then came the “race riots” around the country of early October followed by the apparently coordinated terrorist attacks of mid-October that took a death toll surpassing that of 9/11.  Like the latter event, right from the outset, there were strong suspicions of “false flags” behind both sets of disasters.  Nothing has been proven to date, and it might never be.  After all, 15 years after 9/11, even with the release of the famous “28 pages,” although the noose of circumstantial evidence grew tighter and tighter, nothing had been proven conclusively by that time.  But, false flag or no, Donald Trump rolled into the Presidency.

The Republican Establishment, even those who had stood to the side, or perhaps just a bit to the side, were thrilled. Trump or no. On meds or no, they had gotten what they were primarily after in the election: control of the Supreme Court, the decimation of all Federal regulatory programs as fast as that could be accomplished, further tax cuts for the rich, further destruction of the U.S.’s pitiable “safety net,” from Social Security to Medicaid, a rapid increase in the already bloated but oh-so-profitable levels of spending for the Military-Industrial Complex, the end of ANY action on global warming and so on and so forth.  Of course with the Trump win, the Republicans actually not only strengthened their House majority but their one in the Senate too.

In rapid succession Mitch McConnell ended the filibuster and got the “Scalia Seat” filled with a judge who made Chief Justice Roberts look like a “flaming liberal.”  Obama Care was repealed on Congress’ first day, and the Ryan “Poverty Plan ,” actually a plan to increase it, started making its way through the committee structure.  Huge authorizations for an increase in military spending were put through, as the U.S. increased the multiplier in that regard for which it stands in reference to the military spending of all the other countries.  And so on and so forth. (Note that Obamacare, a scandalously complicated and flawed piece of legislation originally cogitated by the Republicans, should have been put out of its misery in embryo, and a single payer system finally enacted. But Obama and his crew, in one of their many betrayals, scuttled this option without much explanation to the nation before the Congressional debate even began. As a result, the law has satisfied far fewer people than a single payer system, and attracted the whorish attention of right wing whores and Yahoos, who saw a target of opportunity and seized it with alacrity.—Eds.)

But then came the cropper, or croppers, that lead to President Trump’s demise.  Medication or no.  “Calming down” or no. Trump began to move, to the extent that he could from the Oval Office, on two of his primary themes: “ending free trade” and vastly diminishing the U.S. overseas military commitments, especially when it came to NATO.  Neither of these could the U.S. ruling class possibly abide, for reasons that are very well-known.  (Or rather, should be if the prostituted media had been doing even a minimum job of informing the nation). The establishment and the multitude of minions of the Deep State, corporatist America, entered the stage in force.  Trump was counseled on the issues.  He was plead with.  Demands were put on him; deals were offered.  But he wouldn’t budge.  “This is what I promised and promises I keep” (an ironic statement giving his business dealings, but that is another story.)

And so, he had to be gotten rid of.  But how (other than the old-fashioned way?)  It proved to be surpassingly simple.  One of Trump’s first personal actions was to reach down into the bureaucracy and appoint a new Director of the Internal Revenue Service, for he intended to use it for political/revenge/repressive purposes, just as it had been used, for example, during the McCarthy Period,against the Progressive Party’s candidate in the 1952 elections, the labor lawyer Vincent Hallinan.  That Director was personally loyal to Trump, but in the wave of new senior managers who were quickly brought in, there was at least one who wasn’t.  And so, Mr. Trump’s income tax records, which he had never opened for public inspection, either before or after the Election, found their way into the hands of Trump’s ruling class enemies.  The record/indications of both criminal and civil fraudulent activity were beyond anyone’s imagination.

The material was made public like a slow flow of water.  Characteristically, and petulantly, Mr. Trump refused to resign.  But, naturally to no avail. What is one billionaire when the fate of all billionaires is at stake? Since most members were bought and paid for by the ruling class, His programs which so troubled the ruling class were conveniently held up in Congress.  The impeachment proceedings were started forthwith, led in the House by Pretty Boy Ryan and in the Senate by Never-Made-it-to-Admiral-did-he John McCain.  They went pretty quickly (details to follow, anon).  And the ruling class was again firmly in the cat-bird seat.

The coda to this sordid chapter (in fact they are ALL sordid), is that Trump did make it to the Presidency, although under suspicious circumstances.  With him, the ruling class was able to achieve its major domestic priorities, starting with massive de-regulation in all spheres of governmental and private sector activity.  And then with him too, achieving even further increases in the already massively bloated military-industrial complex.  But then there was the threat to the ruling class’ foreign policy, based first and foremost on unchallenged military strength, and projecting it around the world—which is the only “normal” framework accepted by the Pentagon and the forces it represents. And so, Trump had to go.  It was a marvelous irony, was it not, that they achieved that objective by getting to the tax returns that he had indeed very good reasons for not wanting to make public, while at the same time, he was using the Internal Revenue Service to pursue personal objectives against others.  Indeed, hoist by his own petard he was. It has happened far more frequently in the annals of history than Shakespeare first noted in the 16th century.

Invisible Government Series I: Who Rules the Anglosphere?