China Rising, a book by Greanville Post correspondent Jeff Brown, climbing to the top among titles dealing with China. 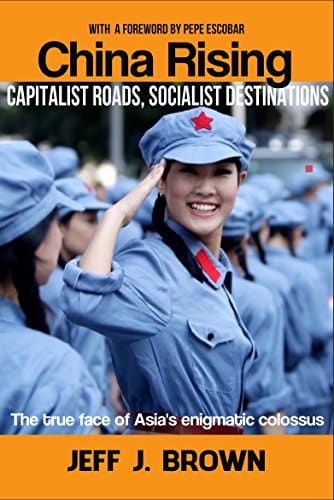 Editor's Note
We are extremely proud and happy to see one of our titles, China Rising, Capitalist Roads, Socialist Destinations, written by our Beijing correspondent Jeff J Brown, and published by our publishing arm, Punto Press, attain a high rank in a tremendously competitive category. Why are we celebrating?

Because getting the message out, speaking truth to the masses, whose minds are literally soaked in the abject lies and distractions sown as landmines by the imperial plutocracy, is a huge, well-nigh impossible task.  This is a task that demands a concerted effort, not just by us, the editors and writers at The Greanville Post and similar genuine alternative media, a thin line of reason and truth against a colossal enemy, but also, by you, the readers, since the crisis afflicting the world today —a crisis which, may I remind you, could be the terminal crisis for a deeply misguided humanity— involves us all. That's why we have published this advertorial about this book as a regular article. We want you to take note and do your part in the great Battle of Communications against the Big Lie that oppresses us all. A Battle of Communications we can't afford to lose. For China Rising is not just a book about China. It is a book about us, about the United States and its hypocritical policies; about Western Europe, France, Britain, and other nations in which the Big Lie rules. What is now politely called "the West".

What is it that we require from you? Quite simple. Something that is not quite a favor because it will benefit you as much as it will benefit us. Strike a blow for peace to defeat the filthy politicians who, prostituting themselves to the sociopathic 0.0002%, are engaged in destroying your safety net, already in jeopardy or in tatters; building more inequality and economic insecurity, and blocking all paths to the salvation of our beloved planet and its innocent creatures.

Your actions in this case should be straightforward: If you have an account with Amazon, file a review of this book. You can even base your review on one of the already published reviews on this site, or those that have already been printed on Amazon. Better still, you can buy the book (in order to file a review it is NOT necessary to purchase the book). Either way, at this point, the object is to show Amazon that our colleague's book is deeply appreciated by a truth-loving public. Once that is accomplished, Amazon may help promote the book further, assuring its place among the bestsellers on this important topic. That would do a lot of good.

And while you are at it, pass the word around, tell your friends and colleagues about China Rising. Remember that only a properly alerted, politically awakened American population can stop the current criminal drift toward war with China and Russia—a veritable Armageddon— being plotted by the corrupt, power-frenzied maniacs in Washington, supported, as always in that task, by the corporate media prostitutes, who apparently have no bounds in their criminal indecency. (Here's a couple of excellent analyses on that perennial problem, prepared by two highly perceptive voices: More anti-Russian propaganda from the New York Times; and WESTERN PROPAGANDA – SO SIMPLE BUT SO EFFECTIVE! )
Do this much today, don't let it slide until tomorrow. Strike a blow for truth in this great struggle, if you care at all. Do it now.—Patrice Greanville

Why is China Rising a top seller in just two months on the market? The public has spoken. Here are some excerpts from readers’ Amazon book reviews so far:

“This is a remarkable document… ‘China Rising’ is refreshing, even nourishing. I highly recommend it.”

“A remarkable and fascinating book by Jeff Brown that you must read to understand China and its position in the world… A must read book!”

“Essential Reading For A Balanced View On China: Jeff seems to know China better than any Western writer I have found. Since he is fluent in the language, writing, culture, politics and mentality of the Chinese people, his writings always carry much more knowledge and information than all the other authors who portray themselves as ‘China experts’.”

“Jeff Brown is an American expat who lives in China and he presents a unique insight into both the US and China in this book ‘China Rising’… This book is an eye opener in so many ways that I recommend it without reservation.”

“Be prepared to set aside all of your fallacious preconceived notions in this hard-hitting exploration of the rising star of China and the meteoric decline in the fortunes of America as it loses its mantle of leadership and control.”

“Brown’s book lifts the curtain on this truly unique civilization and, based on its complicated centuries-old history which Brown details and documents so well, what might come next.”

“On rare occasion, a book comes along that genuinely rises to the level of a ‘must read.’ That overused phrase has never been more true when applied to ‘China Rising’, an incisive work that challenges many prevailing perceptions of China.”

“As the world changes geo-politically and the shift of power is grinding on in favor of the new rise of Asia, it is fitting that Jeff produces his Chinese sagas now (his first book is ’44 Days Backpacking in China’, a socio-political travelogue), at this very time, since his works are at the forefront of history.”

Why not find out for yourself what all the buzz is about? At only $9.99, it’s a bargain!

If you are unable to access Amazon online, China Risingis also available here.

Be sure to leave a review on Amazon and pass the word!

“44 Days Backpacking in China- The Middle Kingdom in the 21st Century, with the United States, Europe and the Fate of the World in Its Looking Glass” by Jeff J. Brown @ www.44days.net on Ganxy

NOTE: ALL IMAGE CAPTIONS, PULL QUOTES AND COMMENTARY BY THE EDITORS, NOT THE AUTHORS
All comments subject to anti-hacking filters.
6
6
Shares
1 comment 0 FacebookTwitterPinterestLinkedinVKRedditWhatsappTelegramEmail
previous post

Did they say “Clinton Foundation?”