The “Look Up” Experiment 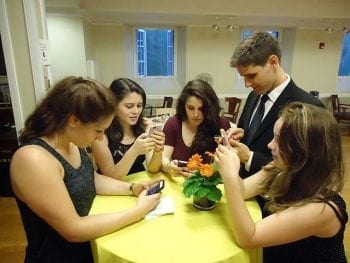 Editor's Note
The commercial below speaks to the increasing obliviousness of people (in this case the youngest generation) to the world around them because of their absorption in electronic media. While the commercial speaks to one side of the issue, it totally misses the other - the power of that media to shape the very perception and understanding of reality.
Wow. This says a lot about the Brave New World we are steadily marching into these days.

This “experiment” is an ad for the yet-to-be-released Dolmio Pepper Hacker, a sneaky gadget that looks like a harmless pepper grinder but actually cuts the WIFI signals at the dinner table so parents can bring their tech addicted children back to reality.

That’s the level we’re at.

In the video below, they set up several tuned out elementary age kids obliviously playing games on their iPads and other devices at the dinner table by changing up the room’s decor around them and finally, swapping out their own parents and siblings with completely different people dressed similarly… all without the children noticing what was happening around them.

When the WIFI was cut, the kids finally looked up and realized they were in a strange new environment surrounded by total strangers.

Sure, it’s a commercial, but it’s not fiction. This really is how obliviously lost in the Matrix the youngest generations in our tech addicted society are. You’ve seen it with Pokemon Go. It’s just sad we’re to the level that, instead of parents telling their kids to put down their devices and come eat dinner, parents are going to buy more devices to combat the devices they won’t make their kids put down when they come eat dinner…

Melissa Dykes is a writer, researcher, and analyst for The Daily Sheeple and a co-creator of Truthstream Media with Aaron Dykes, a site that offers teleprompter-free, unscripted analysis of The Matrix we find ourselves living in. Melissa and Aaron also recently launched Revolution of the Method and Informed Dissent. Wake the flock up!