Amazon tycoon Jeff Bezos’ chief instrument for mass disinformation, The Washington Post, continues to sow mayhem across the planet. The lies are often transparent, but few people have the time or patience to track the glaring contradictions.

Yesterday (Jan. 15, 2017) one of the largest U.S. newspapers, The Washington Post, published an article on a possible humanitarian crisis in Damascus.  (Frustrations rise in Damascus as water pipes run dry). The article’s authors accuse the Syrian government and Damascus city administration of inaction and deliberately impeding the repair of water pumping stations that supply most of the city’s fresh water. They also accuse the government of “crushing the opposition”.

This article is another example of how The Washington Post uses propaganda to criticize the Syrian government. The method is rather elementary but effective:

The Inside Syria Media Center decided to study the article and check the facts it contains.

It is obvious from the article that the authors want to blame the government for all the problems Damascus residents have to face, but in doing so, they often ignore simple logic. For instance, a paragraph at the beginning of the article contains two contradicting sentences.

“Officials said over the weekend that repairs have begun on the facility,” the authors write. Indeed, on January 13, the city administration reported this. The next sentence, however, reads that the Syrian Army shelled the same area. According to the Post, the government seems to have sent in its own specialists and then proceeded to shell them!

Then, the journalists cite a phone call with a woman who is afraid of ‘government repercussions’ and therefore asks not to use her family name. She mentions the problems the residents experience with water and electricity. But why would the woman be afraid of ‘repercussions’? All she said to the journalists is that it’s difficult or impossible to provide uninterrupted operation of water and electrical infrastructures in a situation of military combat. What could be so dangerous about such an assertion? The article authors seem not to have pondered such questions in their zeal to present Bashar al-Assad ‘as a bloody dictator’.

Meanwhile, the authors quote a Damascus resident Ammar Ismaiel who states that “there is indignation against the state because they’re delaying a military solution” to the jihadist forces making life hell for the Syrian people. Here we have an opposite narrative to the one supposing that the Syrian people oppose their elected president, but the Post does appear to see the contradiction nor does it explore it further.

The Post article writes several paragraphs about how the Syrian Army is conducting an offensive on the Wadi Barada valley just west of Damascus. The area is controlled by anti-government militants and the Barada River and its tributaries are the source of some 70 per cent of the fresh water supply of Damascus. On January 14, Al-Masdar News reported that Syrian troops had captured Baseimah town and are advancing towards Ain al-Fija where the damaged water pumping stations are located.

The Post journalists entirely omit a key part of the story of Syria today, which is the extensive efforts by the Syrian government to solve the crisis in the country via dialogue. A great many local ceasefire and reconciliation agreements have been reached, including the very large ceasefire agreement in Aleppo. Conferences in Kazakhstan later this month and in Geneva next month will seek to broaden such agreements to the entire country.

In Wadi Barada itself, a preliminary agreement on ceasefire had been reached with the militants last week, but  according to Syria’s Minister for National Reconciliation Ali Haidar, they failed to abide by it.

Further complicating the situation there, a retired brigadier general, Ahmad al-Ghadban, was shot dead by a sniper on January 14. He was serving as one of the main mediators between the government and the armed groups in Wadi Barada.

As a result  of militant’s actions, another truce agreement has been disrupted and clashes continue. According to Umar al-Shami, one of the political leaders of the Ahrar al-Sham opposition group, the assassination could have been set up by the Jebhat Fateh al-Sham group that is against the ceasefire and has evacuated to Idlib. But the Washington Post simply ignored that whole story.

While blaming the Syrian government, the authors provide no objective proof. Mostly, their arguments are based on anonymous sources who they allegedly contacted via telephone or WhatsApp. The journalists accuse President Bashar al-Assad of inaction or of seeking personal enrichment and conducting inhumane treatment of the Syrian people. But they never mention the militants’ crimes and the fact that they have used water as a weapon against Damascus and its residents. Unfortunately, most media which promote the U.S. and its allies’ point of view use the same deceptive patterns.

Prof. Tim Anderson alerts us to various efforts by Western agents to disseminate fake news against the people of Syria. Examples and alerts below.

(1) Below: Story circulating again to charge Pres. Assad with commission of a crime carried out by terrorists organized by the Western intel agencies and Saudi Prince Bandar bin Sultan (“Bandar Bush”). 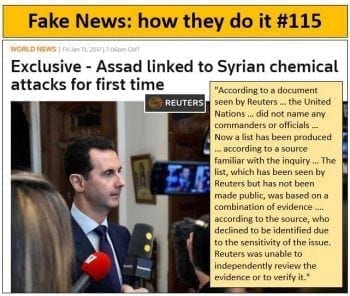 (2) Below: International correspondent Vanessa Beeley has been accused by 5th columnists and “imperial leftists” of militancy in rightwing terrorist organizations. The obvious goal is to neutralize her effectiveness as a truth-teller in the atrocious wars waged by the Western powers in the service of plutocratic domination. 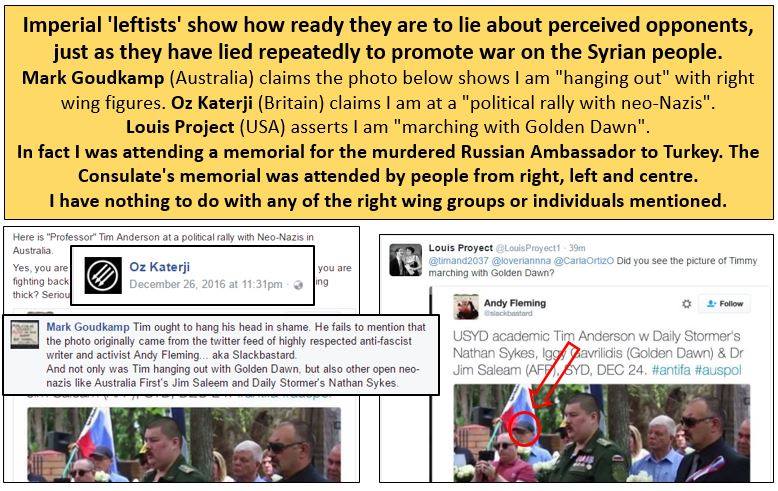 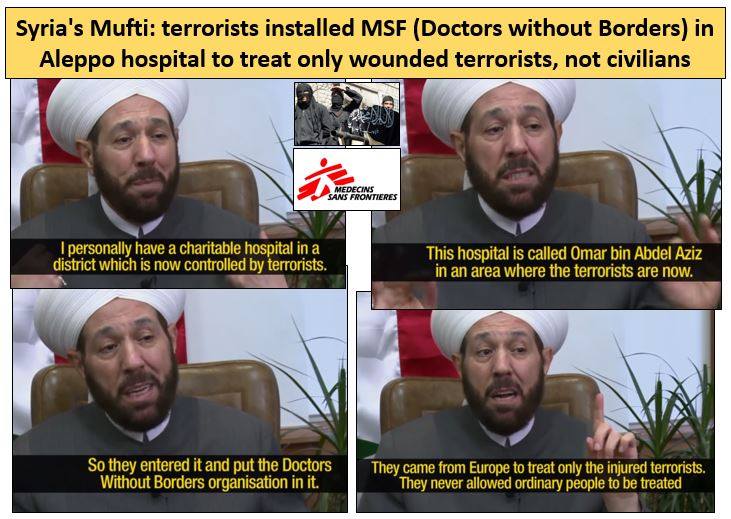 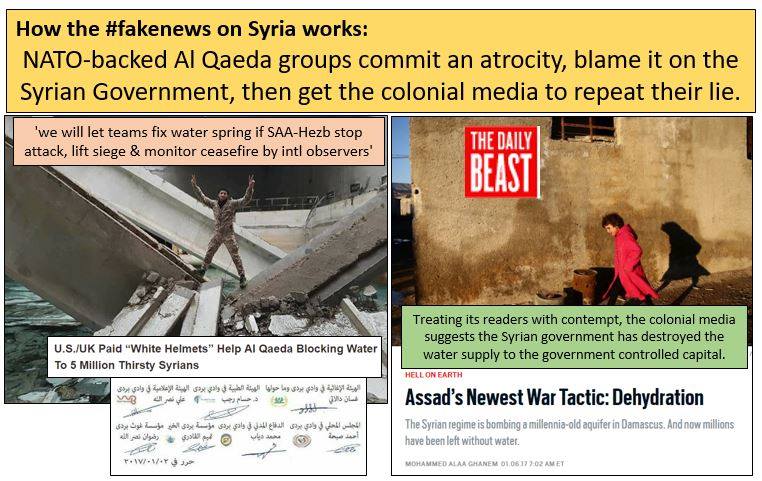 The issue is not Trump. It is us.

I really am speechless. Goebels would be proud . I my self do not know how long the fourth estate in the west can keep this up. Seeing they have lost any credibility they ever had. I think that in the anglo-sphere countries they might get away with it but the rest of the world have definitely wised up to such blatant propaganda. Western journalist not all but the vast majority have only become stenographers for the deep state. Democracy freedom and justice or truth justice and the american way is just another way of saying that fascism in the… Read more »

INDEED, dear reader. The filth represented by the Western media, as natural extensions of corporate interest, guided by both this servility to capitalism and their personnel pathetic values, ignorance and opportunism are a disgrace and grave threat to progress and the possibility of survival on this planet. They are therefore more than just a disgrace but a universal danger. Orwell, the onetime socialist/anarchist was wrong in his accusations via 1984. He was brilliant in panting the architecture of a paternalistic authoritarianism, but, as most anti-communists, he picked the wrong example. It was not real-existing communism as seen in the USSR… Read more »

A comic without illustrations