Ai Weiwei is an amusing self-promoter whose vehicle is Western gullibility.

CBS and the US machine of disinformation would like us to believe this about this man. Watch closely:

Rita Braver catches up with Chinese artist Ai Weiwei, whose latest exhibition is his largest undertaking yet: an installation in all five boroughs of New York City titled "Good Fences Make Good Neighbors."

BUT the reality, as usual, is quite different. Weiwei is a basically a con artist, a figure deliberately used (with his eager consent) by the US disinformation machine as part of its new information war on China, a war of lies and slanders that has been going on already for several years, but which is now, in the wake of America's setbacks in Syria, being revved up even more in compliance with the empire's goals of harassment and destabilisation of Russia and China, something Obama, loyal servant of the Deep State, kicked off with his deviously labeled "Pivot to Asia".  The charge, as usual (for a sociopathic empire that has killed tens of millions, and destroyed dozens of nations, plunging countless people into the most horrid misery), is that China is guilty of "human rights abuses." That's right, China. Or so say prominent, widely paraded "dissidents of convenience" like Ai Weiwei, the latest Chinese media darling.

In any case, our special editor for Asia affairs, Godfree Roberts, has the lowdown on Weiwei. Here it is:

Ai Weiwei is an amusing self-promoter whose vehicle is Western gullibility.

In 1983, he was expelled from a New York design school for chronic absenteeism, forfeited his visa and was an illegal immigrant in the US for much of his time there. He was charged with doing construction work without a license and worked as a ‘tourist guide’ in the 42nd Street Red Light district, apparently earning commissions as a pimp. He then spent two years gambling in Atlantic City, buying free chips from bus tourists and reselling them.

The son of high-ranking cultural official and poet, he came to international attention when he claimed to have designed Beijing’s Birds Nest Olympic Stadium, despite the fact that architect Li Xinggang’s model of of the Bird’s Nest was adopted in April, 2003, long before Ai attempted to join the design team in 2006.

When he publicly threatened to boycott the Games, he made a serendipitous discovery: Western critics were delighted by an artist who condemned both China and the Beijing Olympics. The US. promptly awarded Ai a permanent Green Card in return for his willingness to insult China, art commissions flowed, and media sought his wisdom on every topic.

Encouraged by the attention, Ai claimed that China had made no progress of any kind in the previous 30 years, that the country had more poor people than ever, that everything was worse and that government leaders were stealing all its citizens’ money.. ‘China has no hope, no dreams, no future’; it is ‘a broken vehicle that will soon disintegrate’.

The Global Times Chinese Edition commented plaintively: "China needs a multiplicity of voices and for this reason diverse opinions should not be suppressed. Ai Weiwei, however, has gone too far in mimicking American ways and his behavior is naive and childish”.

The media loved him but, at the height of his notoriety, journalists suddenly abandoned him and raced to report on one of the greatest natural disasters in modern history: the Sichuan earthquake that killed 100,000 people in 24 hours, left 370,000 injured and 5 million homeless over an area of 200,000 square miles. 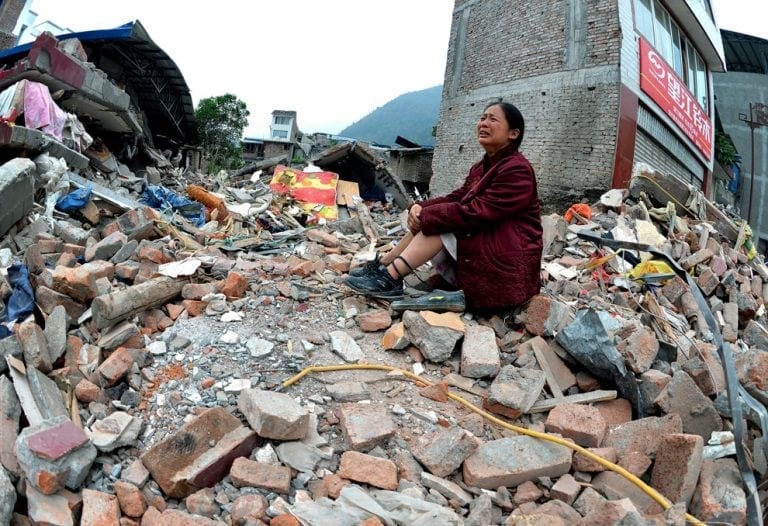 The government reported that more than 7,000 inadequately engineered schoolrooms had collapsed and The Christian Science Monitor explained why, “Earthquake engineers say that constructing a building to resist a quake of magnitude 7 or 8 is possible but is often considered cost prohibitive…Schools are particularly vulnerable because they are mid-sized buildings, smaller projects for contractors that are paid by [local] government bureaucracies. Two recent earthquakes in Indonesia and in Kashmir also resulted in a disproportionate [number of] student deaths.”

Local mayors explained that the schools had been built in the 1980s, when parents were desperate to get their children out of buildings like caves that seeped water during winter rains, “We didn’t have much money back then and the schools were the best we could afford”.

Ai followed the journalists to Sichuan with an irresistible story: Chinese authorities were guilty of negligence and malfeasance and thousands of children had died because Party corruption had led to shoddy construction. He set up an installation of the dead children’s names, posted the lists on his blog and created an exhibition with children's backpacks symbolizing their deaths. Ai gathered credulous journalists each day, eager to receive his revelations, ignoring the obvious fact that it would take many months even to find, identify and count the dead, let alone ascribe causes for their deaths.

The final report showed that virtually all the children who were in school during the worst quake survived twice as well as adults: 99.8% of children under 14 survived.

But, by the time the report was released, Ai was a millionaire living in Germany and Western journalists who followed there hung on his every word. His global renown rose further and his artworks sold for millions.

When Chinese tax authorities charged him with failing to declare $2.3 million income he posted bail of $1.3 million cash and appealed, claiming victimization and began public fundraising for his defense.

About the Author
GODFREE ROBERTS serves as Special Contributing Editor for Asia Affairs. A longtime resident of Thailand, Dr Roberts, originally from Australia, is an expert on Asia affairs, with a particular interest in geopolitics, economics as well as science and technology.

GODFREE ROBERTS—The Global Times Chinese Edition commented plaintively: “China needs a multiplicity of voices and for this reason diverse opinions should not be suppressed. Ai Weiwei, however, has gone too far in mimicking American ways and his behavior is naive and childish”.

The Iran Dilemma – The Tyrant Has Spoken

Oy Weh Wei installed huge birdcages all over Manhattan and New York burroughs. These monstrosities are supposed to be concept art but they clutter up the environment. One is under the fine Washington Square park arch by Stanford White and people wonder about its function and why the city spends money so liberally while the homeless shelter near that arch

I carry no brief for this con man, or for US imperialism, but this statement :

” Ai claimed that China had made no progress of any kind in the previous 30 years, that the country had more poor people than ever, that everything was worse and that government leaders were stealing all its citizens’ money.. ‘China has no hope, no dreams, no future’; it is ‘a broken vehicle that will soon disintegrate’. ”

Is essentially true, and is a reasonable criticism (Ironically coming from the mouth of a con -man capitalist roader) of Chinese revisionism, and of life under Chinese capitalism . Long Live Mao .Down with Chinese bourgeois “communism”.

Long Live Mao, the vicious tyrant who made hitler look like a boy scout…. Mao murdered 70 million people in the name of a better world…. so much carnage leads to a traumatized, violence prone society, where man’s best friend, the dog is tortured and slaughtered by the tens of millions for primitive elixiers,,,