How many colorations can a guy have? Too good to be true? Now, all of a sudden, Erdogan seems to be doing something decent.

It does not help that both Turkey and South Africa are ruled by utterly disgusting cliques, with Turkey awash in Erdogan's autocratic gyrations, and South Africa immersed in colossal and cynical corruption. But hey, the moment is so dire for the Palestinians, that, as gestures go, we'll take it. 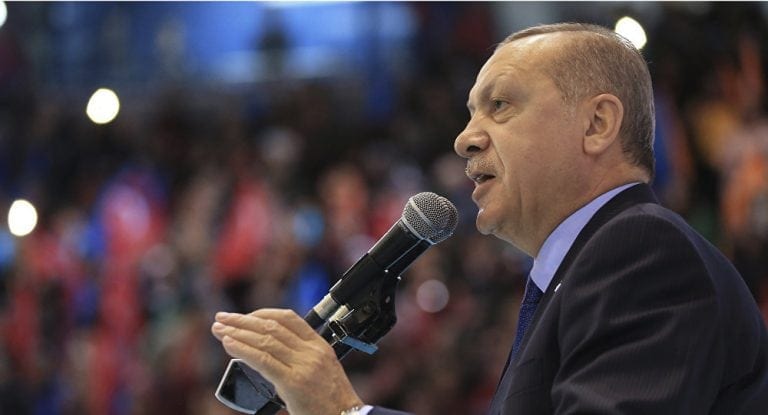 A DISPATCH FROM SPUTNIK

In response to Israel's ongoing violent suppression of Palestinian protesters in Gaza, Turkish President Recep Tayyip Erdoğan has recalled his country's ambassadors to both the US and Israel, accusing Israel of "state terror" and "genocide."

According to reports, Erdogan is recalling the ambassadors for consultations over Israel's brutal crackdown on the ongoing March of Return protests in the Gaza Strip, which came to a deadly head Monday as at least 55 Palestinians were killed while protesting the opening of the US embassy in Jerusalem. Nearly 3,000 Palestinians have been injured in the protests so far.

"Turkey will react to this harshly. We have withdrawn our ambassadors from Washington and Tel Aviv for consultations," Erdogan said on NTV Television during his visit to the UK. "We also propose to convene an emergency meeting of the UN Security Council. We will hold talks with many leaders."

Clashes between Palestinians and Israeli forces began on March 30 at the start of a six-week campaign calling for the return of homes taken in 1948 for the creation of the Israeli state. Ismail Radwan, a senior Hamas figure leading the campaign, told AP that protests would continue against Israel "until the rights of the Palestinian people are achieved."

South Africa also recalled its ambassador to Israel on Monday. A statement released by the country's Foreign Ministry said that its ambassador to Israel would be recalled "with immediate effect until further notice." The South African government has previously criticized Israel's relationship with the Palestinians as "the only state in the world that can be called an apartheid state," Sputnik reported in January.

OPINION: The Anti-Imperialism of Fools

Syria – Another Ceasefire In Idleb – Erdogan...

Putin-Erdogan meeting: a storm is expected over the...

Syria – Another Short Note On The Recent...

Did Turkey Just Sacrifice Their Own Troops to...

Erdogan: Idlib is mine

“It does not help that
both Turkey and South Africa are ruled by utterly disgusting cliques,
with Turkey awash in Erdogan’s autocratic gyrations, and South Africa
immersed in colossal and cynical corruption. But hey, the moment is so
dire for the Palestinians, that, as gestures go, we’ll take it. ”

Well, gentlemen … I don’t think anybody here has much talked about South Africa lately … Does it mean the masses utterly embarrass themselves once they conquer power, OR WHAT is going on there ? Or is it not the masses who got in power, but only the locals who happen to be democratic in convictions ?

Somebody should say it.