Not a month goes by without Canada demonstrating in many ways that it is a strong supporter of the neoliberal imperial agenda of the – take your choice – one percenters, military-industrial-financial complex, the deep state. Since the last report, many things have lined up with U.S. desires for global hegemony 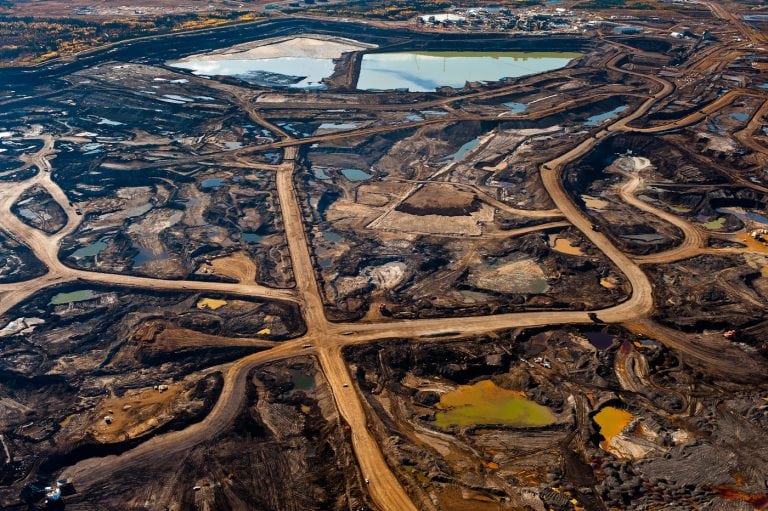 CANADIAN TAR SANDS—THE RUTHLESS DISFIGUREMENT OF OUR EARTH SHOULD TELL US SOMETHING. “The network of roads reminded me of a claw or tentacles. It illustrated to me the way in which the tentacles of the tar sands reach out and wreak havoc and destruction. Proposed pipelines to American Midwest, Mackenzie Valley, and through the Great Bear Rainforest will bring new threats to these regions while the pipelines fuel new markets and ensure the proposed five fold expansion of the Tar Sands.” (priceofoil.org)

First off was another politically oriented attack against Russia – if you can’t get them on the false flag Skripal affair, attack them somewhere else. In this instance the Trudeau government “condemned” the Kerch bridge connecting mainland Russia with Crimean Russia. The road section was completed in two and a half years and was officially opened by Vladimir Putin earlier this month. This follows on the example of their imperial mother, as the UK also condemned the bridge while lying about the annexation of Crimea to Russia.

Along with this are reports of UN forces working on the Ukrainian front lines in the Donbas with possible deaths or injuries to US and Canadian personnel. With nothing being reported in the mainstream media (MSM) this indicates that it may not have happened as it would be a great cause for some more anti-Russian hysteria; or maybe they want it silenced as the Canadian forces are supposed to be there simply on a training mission.

How pathetic – Canada’s lack of critical reasoned response to the Israeli murder of unarmed protesting Gaza prisoners – interesting how a change of word paints a different picture. Canada did respond indirectly through the CBC, its MSM branch, calling the murders to be a result of “clashes” and “violence” even though it was demonstrably a non-violent protest on the part of the Palestinians. To add context, a CBC correspondent showed a simple outline map of Gaza, describing the border as a 60 km “fence” to keep out any “invasion” from Gaza.

Canada’s image as a less savage and immoral country than its giant neighbour to the south seems to rest more on myth than fact these days. Apparently the fruit doesn’t fall far from the tree—the latter being a rotten British ruling class in cahoots with an equally rotten and sociopathic American plutocracy bent on exploiting the planet’s remaining resources—man, animals and nature—to their limit.

The missing context is the absolute control Israel exerts over all aspects of life in Gaza and the use of its massive military to keep the Palestinians under constant military threat from the sea, land, and air. The other part of the missing context of course is the whole history of the colonial settler actions of the Jewish people, a position Canada is familiar with in its own relations with its indigenous people.

As with all things military, Canada plays a subordinate role to the U.S. while cloaking its imperial role in terms of “peace and security”. Canada has taken on the No. 2 position for the command of UN forces technically still at war with North Korea. It goes beyond Korea as the new commander also stretches that role out “throughout the Asia-Pacific region” – an interesting case of ‘mission creep’.

Again Canadians as a whole remain ignorant of the context. There are many historical works on the Korean war indicating that it was essentially a civil war, with the generally approved forces of Kim Il-sung attempting to unite a country divided arbitrarily by the U.S. (with Soviet Union acquiescence) in its attempts to contain China and Russia in the nascent Cold War.

If Canada truly wanted peace in the region it would unilaterally declare its part of the war finished, withdraw its forces, and then work critically towards the U.S. in order to stop their threats and antagonism towards North Korea – and to withdraw their forces and nuclear weapons bases from the region.

Canada retains strong military and financial ties to Saudi Arabia and supports their attitudes against Yemen and Iran – in part by supplying them with billions of dollars of armoured vehicles. Even if the vehicles are not used directly in combat, it does release other monies and materials to be used in the Saudi’s illegal war against Yemen and support its rhetorical boasting against Iran.

On the other hand Canada has decided it won’t recognize the recent election in Venezuela, probably one of the most scrutinized in Latin America. Apparently they say it was rigged and undemocratic even though it has one of the more foolproof election processes in the region. Trudeau actually admitted that he was stopping Canada’s own attempts at electoral reform because they did not suit the purposes of his Liberal government, another nice double standard.

Of course, the real sticker here is that Venezuela has oil….but so does Saudi Arabia? The essential difference being that the theocratic monarchic misogynist head-chopping Saudi’s sell their oil using the petro-dollar and are part and parcel of the U.S. attempts at global hegemony for their financial elite. Venezuela on the other hand does not support U.S. global hegemony, has been under sanctions for a long time, has had one pro-U.S. coup defeated by Chavez, and sells it oil for other currencies.

Canada in its subordinate imperator role (see all the above) has wisely decided to limit its consular contact – a great way for a country wanting “peace and security” through negotiations (a la Israel) to play its proper role.

This is a domestic issue that reflects a global reality. Canada theoretically supports the Paris climate agreement, yet at the same time is pushing for a dilbit pipeline (dilbit is a combination of tar sands and a solvent to carry it) from the interior to the coast. This demonstrates a double standard on two fronts. First is the climate change denial and rhetorical abuses of the slogan calling for both the pipeline and more jobs (as always) against the scientifically known results of spewing more carbon (and other pollutants) into the atmosphere and waterways of Canada and thus the world. In the process the indigenous people get screwed again, as a significant portion of the pipeline runs through their unceded territory and through their historical fishing and harvesting territories.

In sum, Canada continues its recalcitrant and incorrigible actions against countries deemed to be enemies by the U.S. imperium. The maternal influence is strong and is supported by its subservience to its aggressive sibling.

Jim Miles
Jim Miles is a Canadian educator living in British Columbia. He writes regularly about the Middle East and its militarization and economic subjugation. His concerns include the commodification of the world by corporate governance and the American government. He writes book reviews and opinion pieces which are published here, as well as in The Palestine Chronicle and Foreign Policy Journal. His work is widely distributed across the Internet.”
Liked it? Take a second to support this publication on Patreon!

Yes, Virginia, There is a Deep State

Stephen Cohen’s Misrepresentations about the 2014 Coup in Ukraine