Be Prepared To Shake The Earth If Julian Assange Is Arrested 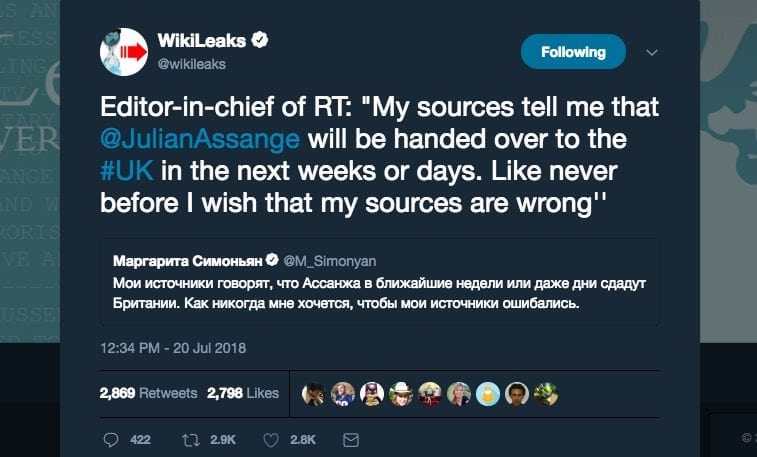 [dropcap]T[/dropcap]oday British foreign secretary Jeremy Hunt repeated the tired old canard that WikiLeaks editor-in-chief Julian Assange “is free to walk out of the doors of the Ecuadorean embassy any time he wishes,” despite the fact that the US government has been increasingly open about its desire to arrest Assange, and that the UK government has for six years refused to say whether it has received a US extradition request from the government which tortured Chelsea Manning. He’s as free to leave as a man with a gun pointed at his head after being told “Don’t move or I’ll shoot.”

“Serious charges have been laid against him and we want him to face justice for those charges but we are a country of due process,” Hunt said of Assange. “At any time he wants to he is free to walk out onto the street of Knightsbride and the British police will have a warm welcome for him.”

Hunt didn’t specify what those “serious charges” are, which is weird, because as far as the public record goes, there are none. Assange was never charged in the notorious Swedish sexual assault investigation, and that investigation was dropped months ago. The closest thing to a charge on the record is a warrant for an alleged bail violation which was absurdly filed a full 12 days after he applied for asylum in the Ecuadorian embassy, and any charge arising therefrom would not be “serious” by any stretch of the imagination.

So we have a UK official publicly stating that there is an agenda to arrest Assange on mysterious “serious charges” right before a visit to the UK by Ecuadorian President Lenin Moreno, who recently met with US Vice President Mike Pence and reportedly discussed Assange. This follows almost four months of Assange being completely silenced and cut off from the world by the Ecuadorian government for tweeting political commentary. And, according to the editor-in-chief of RT Margarita Simonyan, there are in fact plans to turn Assange over to British authorities “in the coming weeks or even days.”

Editor-in-chief of RT: "My sources tell me that @JulianAssange will be handed over to the #UK in the next weeks or days. Like never before I wish that my sources are wrong'' https://t.co/rvN3ne3ifd

The above report that UK & Ecuador are preparing to turn Assange over to UK appears to be true. Big question is whether the US will indict him & seek his extradition, the way Sessions & Pompeo vowed they would. Can't wait to see how many fake press freedom defenders support that.

“The above report that UK and Ecuador are preparing to turn Assange over to UK appears to be true,” commented journalist Glenn Greenwald on Simonyan’s statement. “Big question is whether the US will indict him and seek his extradition, the way Sessions and Pompeo vowed they would. Can’t wait to see how many fake press freedom defenders support that.”

How many indeed? For all the viral, click-friendly wailing and rending of garments about Donald Trump’s “war on the press” because he says “fake news” and picks on Jim Acosta, does anyone expect the so-called free press to rush to the defense of a journalist who is being actively and aggressively persecuted with the full might of the western empire for publishing authentic documents about that very same empire?

We are about to find out if this is the part of the movie where the empire rips off the mask of freedom and democracy and reveals its true tyranny. Assange is a soft target, a controversial figure who has been on the receiving end of wildly successful smear campaigns marketed to every major political faction across the western world. He is the logical place to begin a crackdown on press freedoms and make a public example of what happens to those who shine the light of truth upon Big Brother.

If we allow them to imprison Julian Assange for practicing journalism, that’s it. It’s over. We might as well all stop caring what happens to the world and sit on our hands while the oligarchs drive us to ecological disaster, nuclear annihilation or Orwellian dystopia. If we, the many, don’t have the spine to stand up against the few and say “No, we get to find out facts about you bastards and use it to inform our worldview, you don’t get to criminalize that,” then we certainly don’t have the spine it will take to wrest control of this world away from the hands of sociopathic plutocrats and take our fate into our own hands.

The arrest of Julian Assange would be the fork in the road. It would be where we collectively decide as a species whether we want to survive into the future, and if we deserve to.

Prosecuting Julian Assange will officially open an era of rapid regression of civil liberties and the rise of automated totalitarianism. There will be no place for western dissidents, no courage to resist. The defence of Assange is an issue for all supporters of democratic rights

They do seem to be gearing up for something. Russia hysteria is at its most shrill and hysterical peak ever right now, and it just happens to be coming at a time when one of the key players in the establishment Russia narrative has been completely cut off from the world, unable to defend himself.

So be ready to shake the earth if they decide that this is a good time to sink their talons into him. If they touch one silver hair on that man’s head, we must unleash relentless worldwide outrage the likes of which they have never before seen. Because we’re not just fighting for Assange, we’re fighting for our very survival.

Jeremy Corbyn has spoken out in defense of WikiLeaks and Assange in the past. His moral character combined with his continual rise toward the leadership of the British government may partly explain the rush to arrest Assange as quickly as possible. In what was in my opinion one of the most exciting occurrences in politics last year, Corbyn read an excerpt from Percy Bysshe Shelley’s “The Masque of Anarchy” before an audience of thousands at the 2017 Glastonbury festival.

“Rise, like lions after slumber
In unvanquishable number!
Shake your chains to earth like dew
Which in sleep had fallen on you:
Ye are many—they are few!”

If Assange is arrested, that will be our cue to rise like lions from our slumber, which has gone on far too long at far too great a cost. We cannot permit them to use, exploit and oppress us like this anymore. We are the many. They are the few. Be ready to rise. 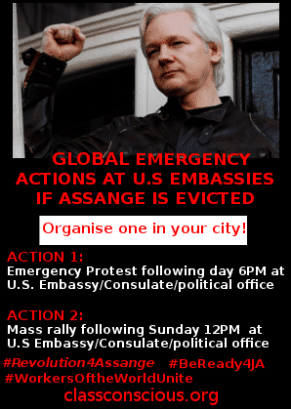 Click here for information about emergency action plans in the event of Assange’s eviction from the Ecuadorian embassy.

The best way to make sure you see the stuff I publish is to get on the mailing list for my website, which will get you an email notification for everything I publish. My articles are entirely reader-supported, so if you enjoyed this piece please consider sharing it around, liking me on Facebook, following my antics on Twitter, checking out my podcast, throwing some money into my hat on Patreon or Paypal, or buying my book Woke: A Field Guide for Utopia Preppers.