[dropcap]T[/dropcap]here are new attempts underway to sabotage the deal U.S. President Trump made with North Korea's Chairman Kim Jong-Un. These attacks are based on misleading interpretations of the agreements that were made between the two leaders.

Duyeon Kim, a fellow of the Center for a New American Security based in Seoul, suggests in Foreign Policy to ignore the agreed upon sequencing of a. the establishment new US-DPRK relations, b. a peace agreements and c. denuclearization of the Korean peninsula.

[T]he issue is the order of agreed points, which has caused confusion and misinterpretation. For the first time in the history of negotiations, Washington essentially accepted, whether blindly or wittingly, Pyongyang’s wish list on sequencing: 1) normalization of bilateral relations, 2) establishment of a peace regime on the Korean Peninsula, and then 3) “complete denuclearization.” ...

This is not "Pyongyang’s wish list". North Korea's "wish list" did not include denuclearization talks. The listed content of those steps and their sequencing was negotiated and agreed upon by all parties. The leaders of North Korea, South Korea and the United States signed on to them. For some undisclosed reason Duyeon Kim wants to change that:

In theory, the peace process and denuclearization process could proceed simultaneously. The practical reality, however, is potentially falling into Pyongyang’s trap. Making peace too soon could produce an economically vibrant North Korean state armed with nuclear weapons and normal relations with the United States. Serious progress on nuclear dismantlement should be achieved before formal discussions commence on a peace treaty. It will take skill and tact from Pompeo’s negotiating team to navigate the pitfalls and landmines along this twisting route.

No" skill and tact" will allow Pompeo to change the sequence that was agreed upon. It would breaks both agreements, the April Panmunjom Declaration between South and North Korea, and the June Singapore Statement signed by Donald Trump and Kim Jong-Un.

Duyeon Kim knows this well but openly argues to follow such a path. Why?

What is so bad with an economically vibrant North Korean state that has normal relations with the United States? Such a state, one hopes, would over time feel secure enough to get rid of its expensive nuclear determent. A threatened and insecure North Korea will certainly never do such. So what is the alternative to the agreed upon process? Duyeon Kim does not provide one.

The Washington Post joins other publications in re-upping the scare about North Korea. It headlines: U.S. spy agencies: North Korea is working on new missiles:

U.S. spy agencies are seeing signs that North Korea is constructing new missiles at a factory that produced the country’s first intercontinental ballistic missiles capable of reaching the United States, according to officials familiar with the intelligence.
...
The reports about new missile construction come after recent revelations about a suspected uranium-enrichment facility, called Kangson, that North Korea is operating in secret.

Duh. No one who followed the issue expected North Korea to stop expanding its still small nuclear determent. There is no public commitment or agreement that says it would do so.

The Washington Post writers acknowledge that. But only after much scary phrased secretive musing and way down in the seventeenth(!)  paragraph:

Several U.S. officials and private analysts said the continued activity inside North Korea’s weapons complex is not surprising, given that Kim made no public promise at the summit to halt work at the scores of nuclear and missile facilities scattered around the country. The North Koreans “never agreed to give up their nuclear program,” said Ken Gause, a North Korea expert at the Center for Naval Analysis. And it is foolish to expect that they would do so at the outset of talks, he said.

The "officials" who leak those bits over continued missile building to the Washington Postauthors also add a rumor that later will be used to demand a stringent verification regime. Something North Korea is likely to reject:

[S]enior North Korean officials have discussed their intention to deceive Washington about the number of nuclear warheads and missiles they have, as well as the types and numbers of facilities, and to rebuff international inspectors, according to intelligence gathered by U.S. agencies. Their strategy includes potentially asserting that they have fully denuclearized by declaring and disposing of 20 warheads while retaining dozens more.

U.S. intelligence on North Korea is notoriously bad. The North Korean missile launches and nuclear tests last year were only detected when they were imminent. It is unlikely that U.S. spy services know what senior North Korean official "discuss" about "potentially asserting" something. The U.S. services probably "gathered" that through South Korea's spy service. But whatever South Korean agencies say about North Korea is colored by their traditionally very hawkish position. They pay up to $860,000 to those North Korean defectors who make up the most scary stories. Such stories are often false.

To insert these rumors allows hardliners like National Security Advisor John Bolton to later demand that inspectors get free reign within North Korea to search under Kim Jong-Un's bed for non existing nukes. Bolton may even dream of joining the WMD hunt. 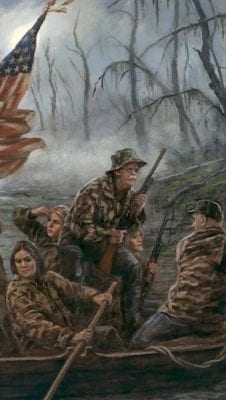 The Post and others are Weaving a Narrative of North Korean Deception. It is based on inaccurate and misleading reporting of what North Korea signed up to. North Korea is known to stick to the letters of its agreements. In the past it was the U.S. that was abrogating them.The Singapore Statement by Donald Trump and Kim Jong-Un is clear in its content and sequencing. First come new relations, likely in the form of opening embassies in each other's country. Then come negotiations over a peace treaty that will replace the current armistice agreement and finally end the Korea War. Only after that comes denuclearization.

North Korea has already fulfilled several side-commitments. It continues to honor a nuclear and missile test moratorium, it blew up its nuclear test tunnel and dismantled a large missile engine test stand at Sohae. It handed over the remains of U.S. soldiers. It is now expecting that the U.S. demonstrates its good will. The Trump administration should lift some sanctions and starts the talks about the opening of embassies.

Changing the agreed upon agenda will not work. If the U.S. goes back on the words its president signed, North Korea will re-up its test program and again demonstrate its expanding capabilities. China, Russia and South Korea have already lifted some of their sanctions on North Korea. Those sanctions will not come back if its U.S. side that does not fulfill its obligations.

The U.S. will then have no leverage left to bring a nuclear armed North Korea to the negotiating table.

About the Author
"B" is MoA's founding editor.

California’s burning: The social and political background of the deadly infernos

Trump and the Politics of Neoliberal Destruction