Home ABOMINATIONS In the Crosshairs of the Washington Mafia: Venezuela and Julian Assange

In the Crosshairs of the Washington Mafia: Venezuela and Julian Assange

The handbook was last revised in September 2008 and published by Wikileaks in December 2008. It’s available on the Wikileaks website , but also in response to a simple Web search for its name. It’s even been available as a $13 paperback on Amazon since October 11, 2013, five years after Wikileaks published it. The mob’s that proud of it.

Despite its availability, the handbook begins with the ominous warning from mob underbosses:

"Distribution authorized to U.S. Government agencies and their contractors only to protect technical or operational information from automatic dissemination under the International Exchange Program or by other means. This determination was made on 28 August 2008. Other requests for this document must be referred to Commander, United States Army John F. Kennedy Special Warfare Center and School, ATTN: AOJK-DTD-JA, Fort Bragg, NC 28310-9610, or by e-mail to JAComments@soc.mil.

"DESTRUCTION NOTICE:Destroy by any method that will prevent disclosure of contents or reconstruction of the document.

"FOREIGN DISCLOSURE RESTRICTION (FD 6): This publication has been reviewed by the product developers in coordination with the United States Army John F. Kennedy Special Warfare Center and School foreign disclosure authority. This product is releasable to students from foreign countries on a case-by-case basis only.”

All three versions available on the Web also contain this message: “ARSOF [Army Special Operations Forces] and other audiences require an unclassified conceptual manual useful to understanding the nature of UW [unconventional warfare] and its role in the nation’s [USMS’s] application of power. This manual provides that unclassified conceptual treatment.”

The “unclassified” designation suggests that the doc may not have been “leaked,” but simply submitted to Wikileaks to call it to the world’s attention. Wikileaks publishes both types of criminal intelligence. Either way, I can’t imagine the Washington Mafia dons were tickled to see it published on the Wikileaks website, then retweeted to Wikileaks followers right in the middle of a global heist. Reports on the doc have subsequently appeared in Mintpress News: Internal US Gov’t Document Outlines Program of ‘Economic Warfare’ on Venezuela , by Ben Norton, and Leaked Wikileaks Doc Reveals US Military Use of IMF, World Bank as “Unconventional” Weapons , by Whitney Webb. 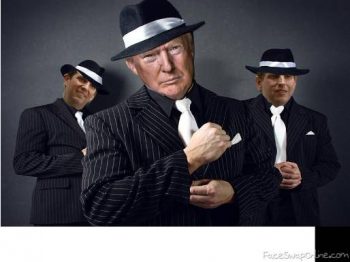 [dropcap]M[/dropcap]intPress News is on the mob’s list of “Russian propaganda outlets” drawn up anonymous media soldiers known as “PropOrNot” Agenda. So are the Black Agenda Report, Consortium News, Global Research, Naked Capitalism, and the Wikileaks website itself. Slandering Wikileaks is a monumental Mafia lie, given that Wikileaks publishes original, primary source documents, and has never had to retract a publication.

Who would’ve thought to look for the mob’s regime change manual if Wikileaks hadn’t published, tweeted, and retweeted it? Clean, don’t-whisper-the-word-bribe journalists follow the Wikileaks Twitter feed and relentlessly search for evidence in its archive of over 10 million documents. My own piece on an African branch of the mob, “Intel Report on Assassins: ‘Rwandans are cold ass mofos’,” is based on a Stratfor intelligence-for-hire document published in the Wikileaks “Global Intelligence Files” archive.

[dropcap]S[/dropcap]o how we can we who abhor mob tactics get Wikileaks founder Julian Assange out of Ecuador’s London Embassy and keep the Washington Mafia from snatching and making a merciless example of him? They aren’t known to use the bone saw favored by the Saudi mob, but they’ve never faced a mortal threat quite like Julian Assange.

On the last Unity4J vigil, a weekly online video conference, former Australian Ambassador Tony Kevin proposed a solution, given that Assange is an Australian citizen:

“There is a way out that I can see which requires a certain exercise of courage and decency on the part of an Australian government, whether this one or the next one, which is, I hope, coming very soon. And that is for the Australian government to, first of all, make aggressive representations in London to have Assange’s jumping-bail charge set aside because it’s really a very minor charge now, because the Swedish government has withdrawn all prosecution. He’s simply up on a technical charge of jumping bail in Britain.

“No Australian government would dare to extradite Assange to the United States without a proper legal process.”

"Now it wouldn't be beyond the capacity of the Australian High Commissioner in London, our embassy there, to prevail on the British government to waive that or set it aside. The next step would be—and I don’t want to sound like a John Le Carré novel, but things happen—would be for the Australian High Commissioner to drive in his car to the Ecuador Embassy to pick up Assange, to drive him under the High Commissioner’s protection, possibly with a British police escort, straight to Heathrow, to the tarmac, and onto a waiting Australian Qantas plane, because we actually have a direct flight on Qantas, our national airline, from London to Perth without stops. And once Assange is on that plane, there is no way he could be touched by the Americans until he gets to Perth. It would then become an issue for the Australian government and the American government what to do with Assange. And I believe that no Australian government would dare to extradite Assange to the United States without a proper legal process, without a proper charge tested in an Australian court.”

I think that scenario is about as likely as smuggling Assange out in a diplomatic pouch with air-holes, and I imagine that Tony Kevin does too, given that the Australian mob has thus far shown no sign of the courage and decency he calls for. Nevertheless, he detailed a possibility that should embarrass the Australians, who are compelled to sustain a public pretense of caring about their own citizens.

Switzerland’s Geneva canton, which is roughly equivalent to a state or province, has adopted a motion demanding that the Swiss government offer Assange asylum. The motion was supported by the left and the right, but not the country’s center-right liberals. (No surprise there.)

Switzerland’s federal parliamentarians must by law discuss such a demand from a cantonal government, but the political parties that supported it at the cantonal level may not support it at the federal level. Even if the mob’s Swiss banking branch risked offering asylum to Assange, he would still need safe passage from London to a Swiss locale.

“Jeremy Corbyn could just say ‘enough of these gangsters.’”

The real lynchpin to busting this mob hit before it happens is UK Labour Party leader and international-law crusader Jeremy Corbyn. Were he to become prime minister, he could say, “Enough of these gangsters,” have the bail-jumping charge dismissed, and refuse to extradite Assange to the mob’s Washington headquarters. The smear tactics that the British mob’s media soldiers have already deployed against Corbyn couldn’t get worse. He is, they say, an anti-Semite, a homophobe, a Russophile, a former Communist spy, a Stalinist, Trotskyist, Anarchist, etc. And now—oh my God!—he supports freedom of the press. He even said so before all the cameras at the UK Labour Party’s last convention.

ABOUT THE AUTHOR
Ann Garrison is an independent journalist based in the San Francisco Bay Area. In 2014, she received the Victoire Ingabire Umuhoza Democracy and Peace Prize for her reporting on conflict in the African Great Lakes region. She can be reached at ann@anngarrison.com.