The ancient superstitions Judaism, Christianity and Islam are all based on are driving nations in the 21st century to go to religious wars. If we want to survive in a nuclear age, this must stop.

Israel's leader B. Netanyahu, supposedly a devout Jew, has been in the forefront of war provocations and acts of violence for decades. His wet dream is to have Iran obliterated by the US.

There are many cases of "revealed" religions pushing and promoting religious war and violence. Both the Bible and the Quran have many examples. Judaism, Christianity and Islam have historically used religious violence to silence critics and to promote themselves.

Christianity and the Christian Bible, the Old and New Testaments, have origins in Judaism and the Hebrew Bible/Old Testament. Because of this, millions of Christian evangelicals in the religious right believe that they should give full and unquestioning support to the Jewish state of Israel. They also believe the US government, and all Gentile nations on Earth, should do the same.

The reason they believe this is because of what is written in the Bible by the ancient Jews who wrote the Bible. Those authors were masters at what is today known as psychological operations, or PSYOP by the military. The purpose of psychological operations is "to convey selected information and indicators to audiences to influence their emotions, motives, and objective reasoning, and ultimately the behavior of governments, organizations, groups, and individuals."

An objective look at the Hebrew Bible/Old Testament makes it very clear the goal of the authors was the promotion of the Jewish state of Israel over all. To accomplish this, they used, and the modern Jewish state of Israel still uses, psychological operations. This is evident from verses such as Deuteronomy 7:6 in which the ancient Jewish clergymen wrote that God said to the Jews, "For thou art an holy people unto the LORD thy God: the LORD thy God hath chosen thee to be a special people unto himself, above all people that are upon the face of the earth." (It's interesting to note that Albert Einstein wrote, regarding this absurd claim in Judaism of the Jews being God's chosen ones, that he is a Jew and has been around Jews all of his life and that he cannot see anything "chosen" about them.)

They then claimed God gave a gift of real estate to his chosen people, which became the Jewish state of Israel. Millions of Christians are told by their clergy leaders that Israel is different than all other nations, because of its alleged divine origins. This is seen in this quote from a list of seven reasons Christians must support Israel. It is from the site of Christian clergyman John Hagee's Christians United For Israel (CUFI), the largest Christian Zionist organization in the world. Reason seven states: 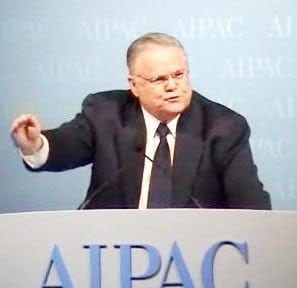 Hagee ingratiating himself to Zionists.

Add to these Israel over all Bible quotes, Deuteronomy 28:1 which claims God said to the Jews regarding their nation of Israel "the LORD thy God will set thee on high above all nations of the earth" and Isaiah 60:12 which claims God said regarding Israel "the nation and kingdom that will not serve thee shall perish; yea, those nations shall be utterly wasted" and it become impossible to understand how Trump can think he's "making America great again" by promoting such a religious state.

This insightful article by Israeli journalist Ben Caspit covers how important Christian evangelicals in the US are to Israel. The Christian evangelical theocrats were an essential element in putting Donald Trump in the White House. Trump has done more than any US president to promote Israel and, like every US president with the exceptions of Dwight David Eisenhower and John F. Kennedy, puts the interests of Israel above the interests of Americans and America. Caspit's article asks the question of what will the US/Trump do if Israel attacks Iran before the US does. He writes:

"... At stake is not only Israel's security and welfare, but also the commitment of tens of thousands of evangelical voters whom, the American president hopes, will again stream to the voting booths for Trump's reelection.

"Israel has transformed this evangelical repository into a tremendous electoral-diplomatic-strategic asset over the last three years, vis-a-vis Trump's administration. Netanyahu and his ambassador to Washington, Ron Dermer, have great influence over the evangelical preachers. The relationship between Israel and this American Christian-messianic faction has been deepening and catching up to Israel's relationship with the American Israel Public Affairs Committee. According to sources at the apex of Israel's most senior echelons, it has been the evangelical card that prevented Trump from whipping out his "deal of the century" until now. This is in order to avoid harming Netanyahu's chances of reelection."

Israel uses Christians to pressure Trump to do Israel's bidding. This is working very well for Israel's benefit. Trump has reneged on the nuclear agreement with Iran and five other nations, he has moved the US embassy to Israel to illegally occupied Jerusalem and he has recognized the illegally occupied Syrian Golan Heights as being part of the Jewish state.

Breaking the nuclear agreement with Iran and the other nations has moved us much closer to a US religious war with Iran for the benefit of Israel. This seems to be the top priority of Israel. This was seen recently when Israeli PM Netanyahu got upset with the European Union for trying to salvage the nuclear agreement. As Israel and its supporters did in the build up to the unnecessary US war against Iraq, that was fought and paid for for the benefit of Israel, Netanyahu accused the Europeans of appeasing Iran just as was done in the 1930s regarding Hitler. This worked very well for Israel regarding the Iraq War, so they're using it again to start a US war against Iran.

We need to keep in mind that all of this warmongering is based on man-made "revealed" religion, in this case Judaism and Christianity. As Albert Einstein pointed out, we desperately need to change our thinking in order to break free of this destructive ancient religious mindset if we want to survive in a nuclear age. Einstein wrote:

far, has created problems we cannot solve at the level of thinking at which we created

them . . . . We shall require a substantially new manner of thinking if humankind is to

If we are truly opposed to war, we must take action to neutralize the forces for war. In this case, the forces for war are Judaism and Christianity. Deism is the antidote for religious war. The essential key is to reach a large enough number of people with the knowledge of Deism. As can be seen in the "Why Deism?" section of deism.com, Deism has won people over from all of the man-made Abrahamic "revealed" religions. The more we do to get the word out about Deism, the further we're moving the world away from horrific religious wars.

ABOUT THE AUTHOR
Bob Johnson is obviously a deist, and a serious antiwar activist.

The US Police-State Is Now Undeniable: The Assange Case