Home BOUGHT POLITICIANS & PHONIES It Is True That Corruption Caused The 737 MAX Accidents. But It Was Not Foreign.

It Is True That Corruption Caused The 737 MAX Accidents. But It Was Not Foreign.

November 26, 2019
Please make sure these dispatches reach as many readers as possible. Share with kin, friends and workmates and ask them to do likewise. 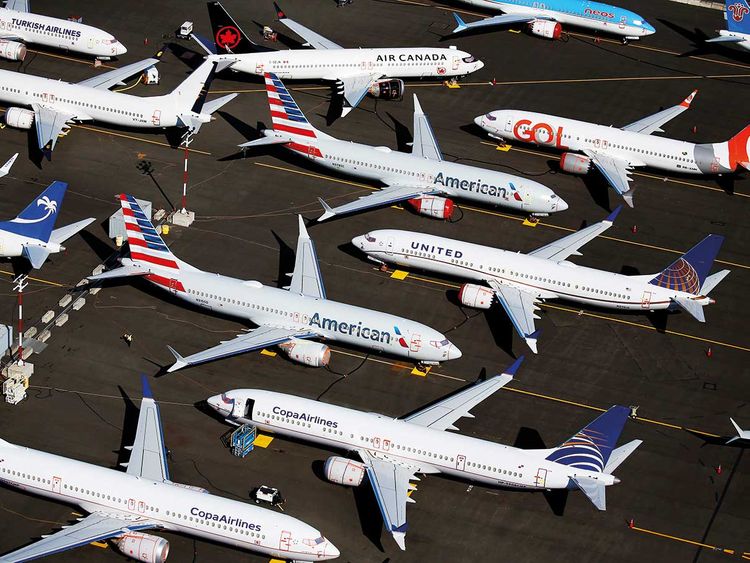 Grounded 737s. Major management failure at the core of this company’s executive culture. The culprit can be identified: It’s capitalism, pure and simple, exerting its lethal dynamic.

The New York Times blamed the foreign pilots for the crashes of two 737 MAX airplanes. It now takes a shot at the foreign airlines:

With Boeing in Cross Hairs, Lion Air Gets a Pass on Poor Safety Record

The lead investigator of Lion Air’s first fatal accident, in which 25 people died in 2004 after a pilot overshot the runway, was Ertata Lananggalih. Four years after releasing a report that critics said underplayed Lion Air’s culpability in the crash, he joined the company, working his way up to managing director. He left Lion Air in 2012 and returned to government work as a senior air safety investigator.

“Indonesia is a corrupt country, but the corruption at Lion is the biggest of all,” said Wicaksono Budiarto, a former pilot for the airline who joined 17 others, including Mr. Eki and Mr. Kalebos, in a lawsuit against the company for dismissing them after they refused to fly in what they considered unsafe flying conditions.

So someone from Indonesia’s air safety agency took another job in the industry. Three years later he changed back into a government role.

That shows that Indonesia is a corrupt country and that Lion Air is the most corrupt, says a former pilot with an ax to grind.

Changing from a regulator to industry and back would of course never happen in the U.S. of A. Except when it does:

[Ali] Bahrami joined the FAA as an engineer in 1989, then rose to become in 2004 manager of the Transport Airplane Directorate in Renton, which oversees the safety of the operating fleet of U.S. commercial aircraft as well as the certification of new airplane models.

During his tenure in Renton, Bahrami spearheaded efforts to delegate more inspection and certification work to industry, and specifically to outsource much of the safety analysis of new Boeing jets to Boeing itself.

In 2013, Bahrami made a move reflecting the tightly intertwined relationship between regulator and industry.

Just months after overheated batteries in flight caused the worldwide grounding of Boeing’s recently introduced 787 Dreamliner — a jet that Bahrami had shepherded through certification — he left the FAA for a lucrative lobbying job as a vice president of the Aerospace Industries Association, representing the big U.S. aerospace companies.

Bahrami—This piece of slime, a merchant of death, is Boeing’s chief lobbyist before the whores of Congress. Not a tough task, considering their near invisible ethics.

“We urge the FAA to allow maximum use of delegation,” Bahrami told Congress, now wearing an industry hat. “It would be detrimental to our competitiveness if foreign manufacturers are able to move improved products into the marketplace more quickly.”

Then in 2017, he returned to the FAA executive ranks at just one level below the top job: Based at FAA headquarters, he’s now associate administrator for aviation safety, overseeing 7,200 employees and a budget of $1.3 billion.

Former National Transportation Safety Board (NTSB) chairman Jim Hall succinctly summed up his view of Bahrami: “He’s been the agent for Boeing’s self-certification.”

Boeing spends $15 million per year to bribe members of Congress.

Congress has made the laws that compelled the FAA to hand off oversight to the manufacturers. It was Congress that pressed the FAA to give Organization Designation Authorization (ODA) to Boeing so Boeing could self-certify its safety related work. As a 2017 Government Accountability Office report to Congress laid out:

The 2012 FAA Modernization and Reform Act required FAA to work with industry to resolve issues related to the efficiency of its certification processes and varying interpretations and applications of its regulations in making compliance decisions during certification.
…
In January 2015, we noted that industry stakeholders favored expanding the ODA program, while the employee unions were concerned about FAA resources to effectively expand it. With completion of all five ODA-related initiatives, FAA has completed all items in its ODA action plan, deployed specialized audit training for personnel conducting supervision of ODA inspections, and expanded delegation to authorize designees to approve instructions for continued airworthiness, emissions data, and noise certification.

The Joint Authorities Technical Review board (JATR) which investigated the 737 MAX accidents criticized the FFA’s oversight over the ODA program:

The JATR recommended that FAA review its staffing levels to ensure it can adequately oversee the so-called designees. The Boeing organization that conducts such work has about 1,500 people, while the FAA team overseeing their work has 45. Of that FAA group, only 24 are engineers.
…
“There are signs of undue pressure” on Boeing employees doing this work, the JATR said, “which may be attributed to conflicting priorities and an environment that does not support FAA requirements.”

Boeing has again and again paid corrupt Congress critters to change the FAA regulation process so it can maximize its income. It continues to do so.

But that the FAA is fully under control of the industry it is supposed to oversee is not a new phenomenon.

D.P. Davies was for decades the chief test pilot of Britain’s Civil Aviation Authority. He is the author of the commercial pilots bible – Handling The Big Jets. In 1992 he was interviewed about the certification process of the various planes he had test flown including the Concorde. He had a quite devastating opinion about the FAA (@37m):

“The FAA lacks courage, political cloud. All the American constructors can dominate the FAA for political and economic gain. And they do. And the DC-10 cargo door was the very best expression of that ever. I have no tie for the FAA flight certification of an aeroplane. If people say to me but FAA has certificated it that is supposed to generate confidence in the listener. It does around the world. [..] If someone tells me the FAA certificated something I am instantly skeptical of it because I know how they work.“

D.P. Davies, the test pilots’ test pilot, doubted the FAA’s judgment because he knew that the U.S. system is utterly corrupt.

It is true, as the NYT writes, that a Lion Air mechanic did not test the new Angle-of-Attack sensor on the accident plane after he had replaced a broken one. The new sensor was miss-calibrated and became one cause for the Lion Air crash. But the sensor had been overhauled by a U.S. company that was supposedly controlled by the FAA. It was the FAA which allowed that company to use test equipment which did not conform with the regulations, resulting in unintentional miss-calibrate the sensor. Only on the very same day the Lion Air final accident report came out revealing that the FAA had (again) failed in its oversight did the FAA revoke the certification of that company.

It is the U.S. Congress, heavily bribed by Boeing, that sets the FAA’s budget and tells it what to do or not to do.

It was the FAA which allowed Boeing to put a defective MCAS system on the 737 MAX. It was the root cause of two accidents which caused the death of 347 people. A senior Canadian safety official now calling for the removal of MCAS from the 737 MAX and trials of an alternative approach. But the FAA, where one Ali Bahrami is now responsible for the re-certification of the plane, will allow whatever Boeing wants to be done. The corrupt members of Congress will take care of that.

If D.P. Davies were still around he would probably say: “The U.S. is a corrupt country, but the corruption by Boeing is the biggest of all.”

“b” is Moon of Alabama’s founding (and chief) editor.  This site’s purpose is to discuss politics, economics, philosophy and blogger Billmon’s Whiskey Bar writings. Some time ago, the commenting at Billmon’s Whiskey Bar became a bit excessive. Billmon therefore closed the comments at his place on June 29, 2004. The community of commentators was left behind to search for a new place. Moon Of Alabama was opened as an independent, open forum for members of the Whiskey Bar community.  Bernhard started and still runs the site. Once a while you will also find posts and art from regular commentators. The name of the original Whiskey Bar was taken from Bertolt Brecht’s Alabama Song where the first line goes: “Show me the way to the next whiskey bar”. The name Moon of Alabama was taken from the first line of the chorus of that song: “Oh, moon of Alabama …”. You can reach the current administrator of this site by emailing Bernhard at MoonofA@aol.com.

China is Building a Community with a Shared Future for Mankind

PATRICK LAWRENCE: Now the Interim of US Self-Deception Over Bolivia