Unrest in Chile Endangers the Most Vulnerable Dogs

Chile’s worst unrest in decades has transformed into a nationwide uprising for change. Hundreds of thousands of people have taken to the streets of the country.

This is a special dispatch from ANIMAL PEOPLE FORUM, a fraternal site
The most violent clashes occurred in the capital city of Santiago, but protests have happened all over the nation. 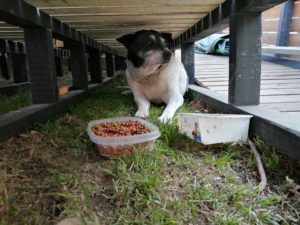 This unrest is difficult for the many free-roaming dogs that populate the Chilean streets. An estimated 253,000 stray dogs live in Chile, most of them in urban areas.

OIPA (International Organization for Animal Protection) has a team of volunteers in Chillán, the capital city of the Ñuble Region in central Chile. Over the most turbulent days, they have rescued dogs who are in greater danger, such as puppies, elderly dogs, and those with impaired mobility. They have brought the dogs to be sheltered in a safe place, a creperie with a large outdoor area.

The use of tear gas during demonstrations poses a danger to the life and health of free-roaming dogs, who wander the streets in a complete panic. Moreover, fear can sometimes turn the most peaceful dog into a dangerous one. Fortunately, the people who are protesting often take care of stray dogs and do their best to keep them safe. 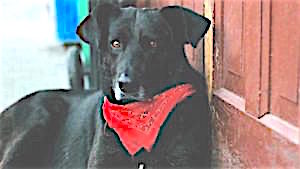 Negro Matapacos, the dog who joined protests in Chile in 2011 and is an icon of revolution today. Image via OIPA.

Solidarity among protesters and stray dogs has a long tradition in Chile.

In 2011, Chile experienced a wave of student protests. One day, a stray dog joined the young protesters in a demonstration. He was friendly with the students and aggressive towards the Chilean police officers.

He soon became known as “Negro Matapacos,” slang for black cop-killer. He continued to take part in protests for years. Negro Matapacos remains an icon, the canine face of socialism and revolution.

A big thank you to Samuel, Angela and all other volunteers who are taking care of stray dogs in such a turbulent time.

Addendum
Latest polls confirm that up to 79% of the people of Chile are now rejecting the neoliberal regime imposed on the nation by Washington in 1973. The masses are demanding not just a rollback of the savage libertarian capitalist measures introduced by successive regimes—of the right and the pseudo left— in the last 45 years, but the resignation of the current president, Sebastián Piñera, one of Latin America’s richest tycoons. Most of the clashes involve hardened youths from the shantytowns and also many middle class students and lately union members. The encounters at many points in the cities often devolve into long pitched battles.

Watch: Glenn Greenwald’s Exclusive Interview With Bolivia’s Evo Morales, Who Was Deposed in a Coup

The American media is worse than useless: Union...

There are many stray dogs in the cities of Chile, more in Valparaiso than in Santiago. Some are dangerous, such as the one that bit me, drawing blood. Because of the probability that such dogs are rabid, I had a series of 6 rabies vaccination injections when I returned to the U.S.