We are indebted to Richard Sanders for bringing this matter to our attention. 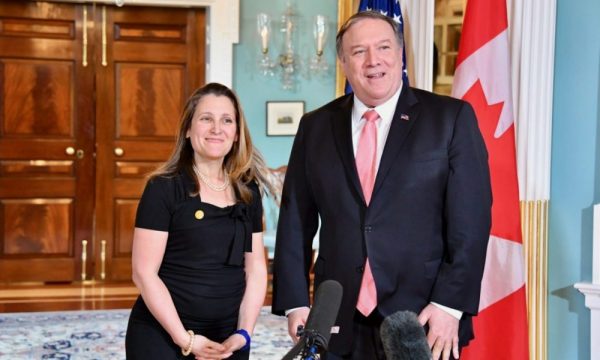 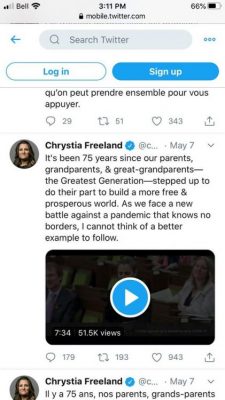 Freeland's tweet praising the role of "our .. grandparents" in WWII needs to spread like wildfire and be used to generate a widespread discussion in Canada. By saying "our .. parents, grandparents .. stepped up to the plate" 75 years ago, on the anniversary of Victory Day, she is putting her grandfather in the same category as those veterans who were on the Allied side against Hitler. Her grandfather was the top Ukrainian-language news propagandist for the Nazis. His newspapers recruited for the Waffen SS Galicia -- a Nazi-armed, Nazi-funded, Nazi-led division that fought against our Soviet allies.  http://coat.ncf.ca/research/Chomiak-Freeland/C-F1.htm

All the soldiers of the fascist Waffen SS division of Ukrainians swore an oath to die for Hitler and yet her tweet puts them on the side of fighting for "freedom and prosperity"!

What was she thinking sending out such an outrageous tweet? Is the media so in tune with her virulently anti-communist mindset that they will ignore this tweet from her? There will not be an outcry against this tweet of hers from her many collaborators in the media, in the Liberal Party and in the Ukrainian-Canadian community. The latter is ably led by her friends in the Ukrainian Canadian Congress which has united the anticommunist emigre community in Canada since its creation for that purpose in 1940 by the Liberal government.
If anything will they try somehow to blame her inflammatory tweet on Russia? Will they try to explain things away as they did before, when news finally came out about her Nazi-collaborating grandfather, that Russiais trying once again to meddle in our democracy and subvert our way of life?
Can they twist history that out of proportion from reality? Will they claim by some bizarre logic that the Russkies and other the millions of other Soviet nationalities who fought in the Red Army were "meddling" and interfering in the political affairs of the Nazis? Will they turn history on its head by portraying the Soviets as our enemies during WWII? At least nine million soldiers (some say 14 million) died in the fight against the Nazis. It was the USSR defeated the German Army at Stalingrad and then chased them back to Berlin and liberating Eastern Europe and freeing those who had been imprisoned in the death camps like Auschwitz.
How then can she say that "our parents, [and] grandparents" came together 75 years ago to fight the scourge that she compares to COVID?
Some 25 to 30 million Soviet citizens died in the war that ended 75 years ago this past Saturday. When the media, and her friends and allies in government and the far-right Ukrainian community blamed the Russians for helping to expose the fact that her grandfather was a major Nazi collaborator, they were doing the equivalent of blaming the Jews for the Holocaust.
Her tweet says that in the current COVID crisis, people can learn from the way "our parents, grandparents and great grandparents" fought in the war that ended 75 years ago.
By this we can presume she is equating the Germans with COVID germs.
Since her maternal grandfather was a major force in the propaganda machine that recruited for Germany's Ukrainian SS Division, and he put speeches by Hitler and Goebbels into the papers that he edited and managed, what is she saying we should do in this global COVID crisis?
As Tony Seed said when he alerted me to this tweet from our Prime Minister in waiting:

"Here is another zinger. Note who she praises most ... and are freedom and prosperity not the neoliberal bywords of today? rewriting history has lots of different manifestations when you have a reason to deny the truth like she does and turn a nazi legacy into its opposite." 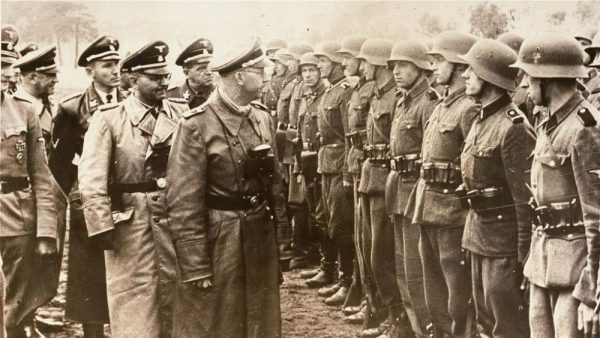 Himmler inspecting soldiers in the Ukrainian Waffen SS Galicia, the kind of evidence Freeland is trying to hide.

Trump Hails Defeat of Fascism as He Paves War With China