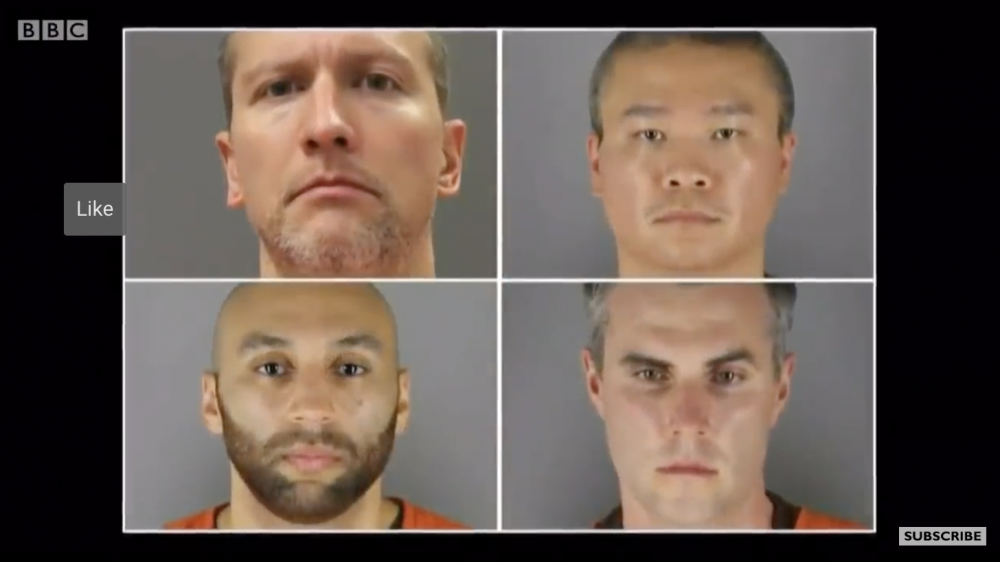 From a recent report by the Insider publication:

" George Floyd and Officer Derek Chauvin actually worked for the same Minneapolis night club- Chauvin as a security guard for many years, and Floyd as a bouncer during 2019."

It begs the question of just how well these two may have known each other, or worse, if Chauvin had some sort of ' Racially prejudiced 'ulterior motive for doing this heinous deed. The report also states:

'This was not the first time Chauvin had been involved in a violent incident during his 19 years in the Minneapolis Police Department. He was involved in violent incidents before, including three police shootings. And he has been the subject of 10 complaints filed to the city's Civilian Review Authority and the Office of Police Conduct....

Two years later, just after 2 o'clock one morning in 2008, Chauvin responded to a 911 domestic-assault call in the Phillips neighborhood of Minneapolis, the Pioneer Press reported.

Chauvin and his partner entered the home, confron'ing Ira Latrell Toles, whose partner had made the 911 call. Toles ran from the pair, but 'they caught and tried to subdue him,' a police statement said. The statement said Toles 'grabbed at one of the officer's guns, and Chauvin shot him in the torso.' "

Is this not shades of the George Zimmerman case regarding his murder of Trayvon Martin?

More from the Insider piece:

"In 2011, Chauvin was involved in a third police shooting. He was among five officers to respond to reports of a shooting. Leroy Martinez, a 23-year-old Alaska Native, was spotted running from the scene, and the officers gave chase, local news reported. The police said Martinez brandished a pistol as he fled. Terry Nutter, one of the responding officers, shot Martinez. An eyewitness account, reported by the Star Tribune, challenged the police's claim that Martinez was holding a pistol when he was shot."

" 'He had no reason to shoot that little boy,' Delora Iceman told the Star Tribune. She said Martinez had dropped the weapon and held his arms in the air before the police shot him.

During his nearly two decades with the Minneapolis Police Department, Chauvin has been the subject of several internal complaints... three separate reviews from the Civilian Review Authority found  Chauvin to have used 'demeaning tone, and' 'derogatory language.' No other details were available. He has also been the subject of seven reviews by the local Office of Police Conduct. Each review concludes: 'Closed – No discipline.' No other details were available."

Derek Chauvin should never have been in the Minneapolis Police Department for as long as 19 years. When one reviews the above news piece, isn't it pretty plain that this dude should never have been in any position of control over anyone! He, and his fellow thugs are right out of the Pinkerton or Baldwin Felts school of law enforcement. Go and get the 1987 film classic Matawan, written and directed by John Sayles, based on the 1920 Matawan, West Virginia coal miners' strike. See how those who ' Own the Manor '  use their paid 'thugs with badges' to keep the rabble in line. Similar to how Officer Chauvin and Co. protected the pure white world outside of the inner city from men like George Floyd. Imagine those neighbors of Floyd who had to stand behind the Blue Wall of Chauvin's three partners ( in crime?) and listen to a dying man gasp for help. Amazing what power those four had over the community because ' They are the Law!!'

One thinks that maybe our local police should realize that the overwhelming majority of us are all Working Stiffs the same as them. The color of the person shouldn't mean squat! We all need to go and punch out the hours for our survival the same as those four cops. I remember how my friend's older sister ( foolish white woman) pontificated at a  Christmas party about the poor: " Let's face it, most of them are either drug addicts or alcoholics". She failed to understand that, in most poor neighborhoods, the overwhelming majority of the residents have to get up early  (sometimes earlier than folks from better neighborhoods) for shitty paying jobs, shit conditions with few or NO benefits. Yet, they do it. Yes, the study of Socialism teaches this writer that Capitalism as it exists today in Amerika has set up the deck their way. In poorer areas the liquor stores abound, along with Payday loans, food stores that overcharge and of course... the flow of illicit drugs goes unabated. The scene from Godfather 1 when the heads of five Mob families discuss the drug trade, one of the mobsters says " In my city we would keep the traffic in the dark areas for the colored people. They're animals anyway so let them lose their souls."

I have been on the soapbox for over 30 years saying that only four year college graduates with majors in either sociology or criminal justice should qualify to be police officers... period! Perhaps if we lived in a more equitable economic system , whereupon ALL who work for the owners get a bigger piece of the pie, the pay would be enough to attract new , more educated police officers. The higher one goes up on the ladder of intellect, I believe rational behavior can follow. The motto ' Protect and Serve' should resonate more than it does now. Too many who stand behind the Blue Wall keep the rest of us away from Truth. I remember speaking to my lawyer's Criminal Defense partner. He had been an Assistant DA for years before jumping ship. " Here's my experience" , he said, " If they want to get someone real bad, they will plant a gun or plant drugs when they arrest. They also will, in more cases than not, LIE on the stand to help a fellow officer. I have seen it too many times. " Who suffers from this ' Perjury Mill' ? Well, all those good officers who go by the book and treat everyone the same, regardless of color, creed , religion or sexual orientation. They need to speak up... loudly!!

Perhaps it is time for all our governments, local, county, state or federal, to insist on a much higher standard for policing. Chauvin wouldn't have his jackboot on Floyd's vulnerable neck if he wasn't a cop in the first place!