The Aryan Myth – The Origin of “White” People

Print this post.
Please make sure these dispatches reach as many readers as possible. Share with kin, friends and workmates and ask them to do likewise.
Michael Smith
Legalienate 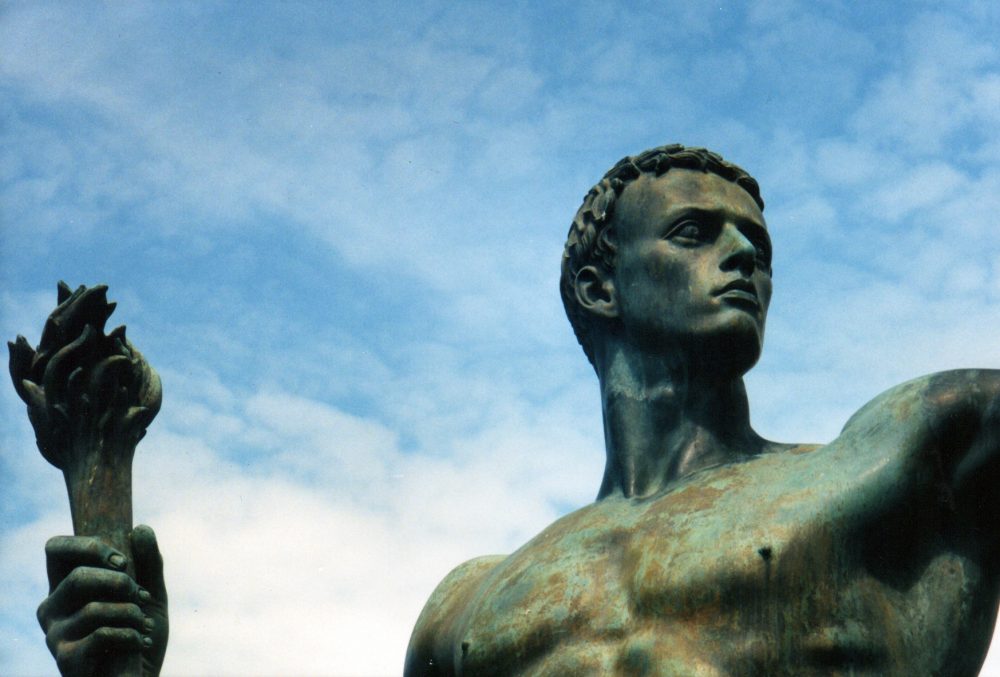 Arno Breker's 1939 neoclassical sculpture Die Partei (The Party), which flanked one of the entrances to the Albert Speer-designed Reich Chancellery in Berlin. The sculpture emphasized what the Nazis considered to be desirable "Nordic" racial characteristics.

This is the key racist myth underpinning conquest and domination in the West. The basic story begins in 15th century England, but in fact it ultimately traces back to Tacitus. The Aryan race just suddenly appears in history roughly around where Iran is today. Allegedly unique, Aryans were described as tall and blonde, with rounder heads than other “races,” such characteristics assumed to be evidence of superiority. They had an unparalleled commitment to law and freedom, and conquered everything in their path as they moved continually westward - west being the direction of greatness – and ended up in the Black Forest region of what we know of today as Germany. There they became the Teutons, a perfect race. But difficulties set in because some of them inter-married with nearby peoples who were not Teutonic, so they lost blood purity and the race degenerated. That’s how the "dirty” and dark-haired people of the Mediterranean came to be. Meanwhile, the good Teutons (i.e., the racially pure ones) just exterminated everyone, thus preserving their superior blood-line.

The good Teutons became the Angles and the Saxons and went to the English channel, crossed it, and exterminated everyone on the other side, although they didn’t manage to kill all of the Celts, some of whom remained around Ireland, but apart from that they did a pretty thorough job of wiping out race competitors. After that, the colonists came to America, continuing the journey West, and that’s how “we the people,” founded the finest, freest country the world has ever seen, with slaves to do the work. “We” refers to Anglo Saxons (at least the wealthy ones), a world conquering race. This appears in Thomas Jefferson’s writings, and is universal in the 19th century. Jefferson and others thought we ought to go back to the 8th century, when they supposedly had the perfect system of law and justice, before the race was poisoned by immigration to England from elsewhere than the Norman Conquest.

The supposed superior racial characteristics of the Aryans/Teutons were quite precisely defined, so much so that Benjamin Franklin didn’t think that the Germans qualified. He said they were a little too swarthy, and they didn’t pick up “our” customs properly. And he saw the Native Americans as an obviously inferior race, which meant that it was right to exterminate them. Teddy Roosevelt claimed that they were actually the beneficiaries of being exterminated, as were the Filipinos when the U.S. invaded and conquered the Philippines in 1898, killing some 200,000 inhabitants of the islands. In Roosevelt’s view, these were sacrifices embraced in the glorious cause of producing a superior race. (Roosevelt's favorite term was "English-speaking race," not Anglo-Saxons, as he could not count himself among the Anglo-Saxons). 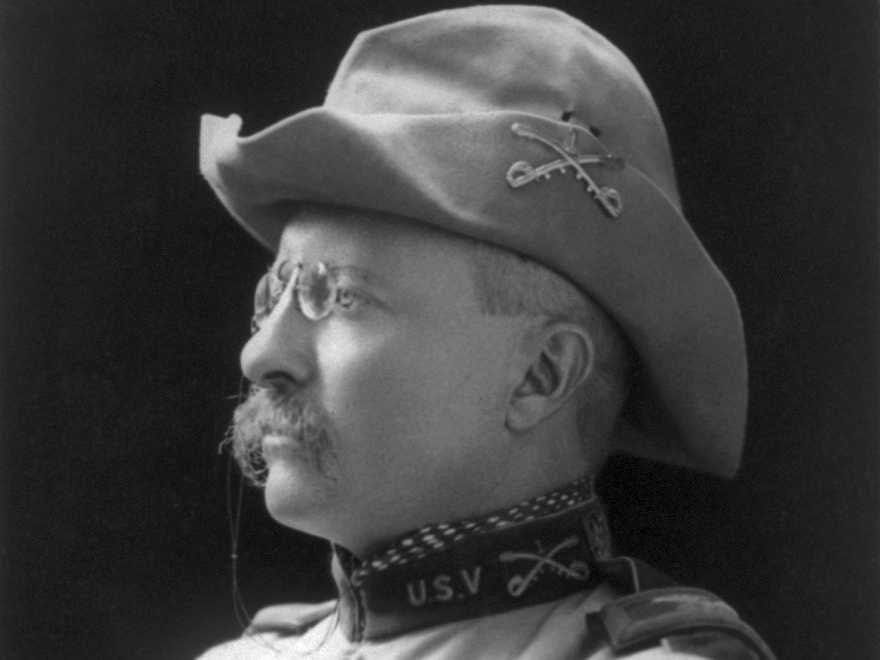 Teddy Roosevelt, an unapologetic imperialist, as a Rough Rider. Like many juveniles, TR liked to play soldier. His war obsessions and ideas of manhood created mayhem and cost one his sons his life.

So racism in the U.S. is not just anti-black racism, it goes far deeper than that. That’s why every wave of immigrants has been treated with vicious racial abuse. The Irish were considered like dogs when they first arrived. Restaurants had signs saying “No Dogs or Irish.” The average life span of an Irish man was under 20 years old. Jews and Hungarians (“Huns”) were treated the same way, everyone from Southeastern Europe was.  The worst case was that of the Chinese, who suffered total racial exclusion under the Racial Exclusion Act. But then came the move to the West, “we” conquered the national territory and later Mexico, fulfilling our “Manifest Destiny” as a superior race. Then came 1898, and Washington stole Spain’s colonies, which were in revolt, conquering the Philippines and then moving on to China. At that point Teddy Roosevelt made one of his important contributions to racist theory, which laid the basis for the later Pacific War with Japan. He designated the Japanese “honorary Aryans.” They looked yellow, but they really weren’t, he said, so they could be “civilized,” and they could sort of pave the U.S. way into China and the East, and the empire would keep going until it circled the Earth and got Aryans back to their original homeland, that is, Iran, or wherever it allegedly was. This fantastic tale is the ideological justification for white supremacy, and it’s widely believed, especially in ruling circles.

The most popular religion in the country, faith in Anglo Saxon blood holds that descendants of select German tribes carry a genius for self-government, nation building, technology, and conquest, which has allowed them to soar over the “lower races” for 1500 years.

“We are Teutons, God’s kings of men,” asserts Colonel Robert Bingham, ex-Confederate officer from North Carolina. Like so many others he believes that manhood, suffrage, and personal responsibility are exclusively Anglo-Saxon achievements. He confidently asserts that “every step towards the higher freedom [was] won in the best blood of our race.”

Anglo-Saxonists thrill to the conquest of the world’s “waste spaces” by the U.S. and Great Britain. Theodore Roosevelt rates the annihilation of the Indian nations an inspiring demonstration of the Anglo-Saxon “race destiny” to dominate less virile peoples. This race potency permitted the original U.S. Colonists to exterminate the indigenous peoples as part of their Christian duties, with religious leaders explaining that their victims were outright Satanic creatures “having little of Humanitie but shape.”

Anglo Saxonists admire Admiral Dewey’s smashing of the dark-skinned Spanish “dons” at Manila Bay, believing it an expression of the “incarnate tradition of Anglo-Saxon seamanship,” just one of many superior traits of the “masterful fighting races.” The decrepit, outgunned Spanish fleet reflected nothing more than an inferior blood line.

Anglo Saxonism enjoys the backing of the new racial sciences, which posit that racial categories are fixed and final, though still curiously susceptible to corruption via the horrors of hybridization. Indeed, since civilized values are progressively destroyed by inter-breeding with the mongrel hordes streaming through American ports like a river of genetic sewage, racial amalgamation is said to be the deadliest threat confronting the white race.

A rising tone of alarm takes hold of popular discourse, with increasing references to the “race problem,” “race war,” and the “higher races.”

Michael K Smith and Frank Scott are the editors of legalienate.blogspot.com.  Michael K. Smith has published three books, "The Greatest Story Never Told - A People's History of the American Empire, 1945-1999," "Portraits of Empire," and "The Madness of King George. His fourth book, "Rise to Empire," is forthcoming. He holds a B.A. in Psychology and a Master's Degree in Humanities. He has lived in Central America, Mexico, and Japan. He currently resides in the San Francisco Bay Area.

ALL CAPTIONS AND PULL QUOTES BY THE EDITORS NOT THE AUTHORS
0 0 votes
Article Rating
All comments subject to anti-hacking filters.
0 comment 1 FacebookTwitterPinterestLinkedinVKRedditWhatsappTelegramEmail
previous post