Home ABOMINATIONS Will NATO Aggression Force Russia to Extend the Special Operation Beyond the Ukraine?

Will NATO Aggression Force Russia to Extend the Special Operation Beyond the Ukraine?

By Batiushka for The Saker Blog 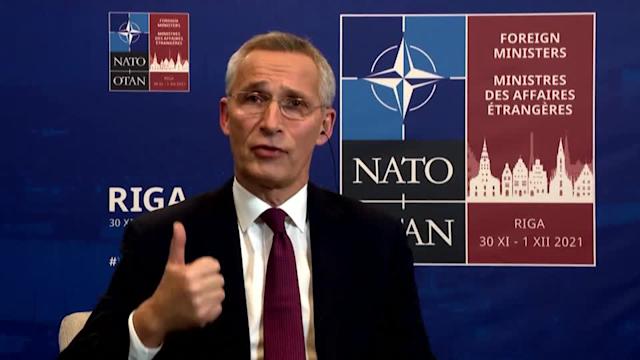 NATO's current chief and pawn of US foreign policy, Jens Stoltenberg; He claims direct war with Russia is not in the cards, but who can believe him?

The three aims of the Russian Federation’s Special Military Operation in the Ukraine were clearly announced by President Putin at the outset on 24 February. They were very specific, very limited and deliberately excluded the occupation of the whole of the Ukraine, let alone attacks on any territories outside it. Moreover, any suggestion of the use of nuclear weapons was quite absent – that was only ever raised by the hysterical irresponsibility and propaganda of Western politicians and journalists. Let us recall that the three aims were, firstly, the liberation of the Russian Donbass from the Nazis, and, secondly and thirdly, the demilitarisation and denazification of the Ukraine as an ‘Anti-Russia’, created there by the West since 2014. In other words, the Russian aim was to finish the unfinished World War II against Nazism and definitely not trigger a ‘World War III’.

Extension Inside the Ukraine?

It is true that since then the first aim of the Operation has had to be extended to the liberation of much of the Black Sea coastal area, including Kherson and Zaporozhia, to link the Donbass with the Crimea. Initially, this action resulted from Kiev Junta attempts to cut off the water supply to the Russian Crimea, and its threats to the Russian Black Sea Fleet and the Kerch Bridge. However, strategically, a further extension of the original aim to include all of the Black Sea coast, including Nikolaev and Odessa as far as the Romanian border, would make perfect sense.

This would leave any rump Ukraine as a landlocked State, like Slovakia or Belarus. This would allow Russian control of the northern Black Sea, undermining current attempts by Western ships to empty Ukrainian grain stores so that malnutrition will begin there, a new famine or ‘Holodomor’, and also provide a landbridge to the isolated and threatened Russian territory of Transnistria. It must be underlined that this has not yet occurred, but given the bankruptcy of the incompetent Kiev regime and even the US admission on 24 May that Kiev can no longer service its debt, more Ukrainian provinces may yet ask to be taken into the Russian Federation.

As Western Ukrainian authorities are receiving NATO supplies from across the Polish border and displaying incredible, Nazi-inspired oppression of its pro-Russian minority, including banning the Russian Orthodox Church (Moscow Patriarchate) and seizing and closing its churches, we wonder if the Special Operation may not have to be extended there too, despite the original aims. However, much more than this, could NATO force a far greater extension of the aims of the Operation through its threats from NATO territories outside the Ukraine?

Extension Outside the Ukraine?

First of all, there are the undemocratic applications of the once neutral Finnish and Swedish establishments to join NATO. This organisation, which bears the words ‘North Atlantic’ in its title, having just lost a war in the foothills of the Himalayas and is now threatening China, wants to expand to Northern Europe. Perhaps its leaders need to take some lessons in basic geography? For the moment Turkey is blocking those applications, but its objections may not, with US pressure on inflation-ridden Ankara, stay the course. In any case, Russia has already clearly stated that if NATO weapons are based in Finland and Sweden, they will be destroyed. Will the second aim of demilitarisation therefore have to extend to those countries too?

Secondly, there is the case of Poland, which already has two battalions (approx 1,000 troops?) of lightly-armed infantry who are at present stationed at the transport hub of Pavlodar in central Ukraine. Are they mercenaries or real Polish-NATO troops? Have they in any case already been destroyed by the Russian missile attack on 24 May? However, much more dramatically, it has been announced at inter-governmental level that Poles and Ukrainians are now ‘brother-peoples without borders’. In other words, as the Russian spokeswoman Maria Zakharova explained on 23 May, Polish citizens in principle therefore have the same rights as Ukrainian citizens in the Ukraine, apart, for the moment, from the right to vote. It means that the Kiev regime has basically renounced its own sovereignty.

This statement potentially implies an invitation to Polish forces to enter and take over several provinces of western Ukraine, which the Polish authorities have coveted for centuries. This would take the Ukrainian Operation to another level. Such a new ‘Ukrainian’ Army would be a NATO army. This could potentially become an invitation for total war between NATO and Russia, since Russia certainly has the right to wipe out foreign troops in the Ukraine, as it has already done. However, all this is speculative and we should wait for concrete facts before drawing conclusions. The notorious warmonger Stoltenberg of NATO made it clear on 24 May that his terrorist organisation does not want what it terms ‘direct war’ with Russia.

Thirdly, there is the case of the Baltics. The US-installed elite in Lithuania, which neighbours vulnerable Russian Kaliningrad, has shown special aggression towards Russia, including threatening to ban the hostage Russian Orthodox Church (Moscow Patriarchate) – as has already happened in extensive areas of the western Ukraine. The pro-Nazi Latvian and Estonian governments are not far off the Lithuanian position. Could this mean that the Russian Federation might decide to demilitarise and denazify those three NATO member-countries too? After all, the three States all have oppressed Russian minorities, especially Latvia. Estonia is very close to Saint Petersburg. As for Kaliningrad, if ever NATO were so foolish as to invade it from Lithuania and Poland, between which it is sandwiched, the consequences would be dire.

Fourthly, there is the case of Romania. Although it has small and perhaps justified territorial claims on the southern Ukrainian border, above all it is interested in Moldova. If it were tempted to invade Moldova, there would be problems not only with the people of tiny and unprotected Moldova, many of whom are not pro-Romanian, but also with Russia. Would Russia allow NATO-armed Romania to invade Moldova, or would Russia sooner take Moldova into the territory of the Russian Federation along with Transdnestria to protect it from NATO? Here too there are many speculations and doubts.

Finally, we wonder if the Russian Federation will continue to tolerate the aggressive statements and actions of anti-Russian representatives of the mercenary US-installed elites in Bulgaria and Greece? If the Bulgarian and Greek elites were cleansed of those who will ‘do anything for a million dollars’ and their countries turned back into pro-Russian territories, it would mean that all of the Eastern half of Europe could at last return to being a pro-Russian, NATO-free buffer zone. This zone would of course include Hungary as well as Serbia, Montenegro, North Macedonia and Bosnia and Herzegovina, that is, most of ex-Yugoslavia, where most people and some of the governing classes are pro-Russian anyway.

As for Central Europe (here we include the Czech Lands, East Germany and Austria, as well as Slovenia, Croatia, and even Albania) and Western Europe, their populations would simply have to cope with being cut off [some] raw materials. This means cut off from Russian oil, gas, paper pulp, fertilisers, cereals and minerals and the eventual possibility of the poorest among them facing starvation and next winter hypothermia because of their ruling classes’ anti-Russian sanctions. Unless, of course, those populations decided to revolt and liberate themselves from their neo-feudal, US-installed colonial elites. Even the offshore UK, with its buffoonish, New York-born Prime Minister Johnson, could yet object and reject. The economic situation in Europe is becoming serious.

Naturally, we cannot say what will happen. What we can say very clearly, however, is that the US elite and its NATO minions are playing with fire. As the dollar slips on a daily basis, now below even 57 to the rouble for the first time since 2015, some Western bankers are beginning to panic. If the NATO vassals have any common sense, they will dissolve NATO altogether, as should have happened in 1991, when the Warsaw Pact was dissolved. However, as they say, the problem with common sense is that it is very rare. It is rather like intelligence, which is very limited – whereas the capacity for stupidity is utterly unlimited….

NATO vs Russia: what happens next

The author forgot to mention the Moldova west of the Prut river. Romania should donate that too, rather than invading the eastern half of Moldova (which it couldn’t do even if it wanted too – it couldn’t oppose even MSG, who was a peacenik – and an ally! – compared to VVP). The history of that land is probably much more complicated, and I really don’t know it, nor do I have great hopes of finding out what it was. Was Russia there before 1800 ? I don’t know. How did they acquire it ? I’m not sure (the Turks… Read more »