Home ABOMINATIONS FROM UVALDE TO UKRAINE – SCHOOL SHOOTERS AT WORK

FROM UVALDE TO UKRAINE – SCHOOL SHOOTERS AT WORK

FROM UVALDE TO UKRAINE - SCHOOL SHOOTERS AT WORK

On May 24th, 2022, an 18-year-old psychopath named Salvador Ramos attacked an elementary school in Uvalde, Texas, and murdered 19 children and 2 teachers, before himself being killed by an off-duty Border Patrol agent. International media, along with all decent people in the world condemned the murderous rampage and the ruthless killer of innocent children and teachers. And how could it be otherwise? There simply is no possible excuse or justification, no "mitigating circumstance", in which random attacks on schools and the massacre of teachers and schoolchildren can ever be anything but a horrendous and horrific crime, of the worst type possible and condemned in every instance, in the strongest unequivocal terms. Right? RIGHT?

Less than one week later, on Monday May 30th, in the mid-morning hours, Three separate schools in the center of Donetsk were specifically targeted and bombed by heavy artillery of the Ukrainian Army. May 30th is traditionally the last day of the school year in Donetsk, as it is in Russia, and all schools, from kindergartens to universities, hold a celebration called "Last Bell". It is a joyous celebration, with family members attending, everyone dressed in their finest attire, with songs and poems, awards, balloons, flowers, cake and refreshments. It was these ceremonies that were specifically targeted by the Ukrainian Army, at Schools # 22 and #13, and Gymnasium #33. The heavy artillery,152mm and US-supplied 155mm shells, arrived with pinpoint accuracy, right in front of the schools, where hundreds of students, teachers and their families would have been gathered, had the celebrations not been cancelled, precisely because of the danger of ukrop nazi shelling. In spite of the precautions, two teachers, and one little girl, Lilia Ripenko died. There were also multiple wounded. Had the attack turned out as planned, there would have been scores or even hundreds of dead and wounded, many, if not most, would have been school children. 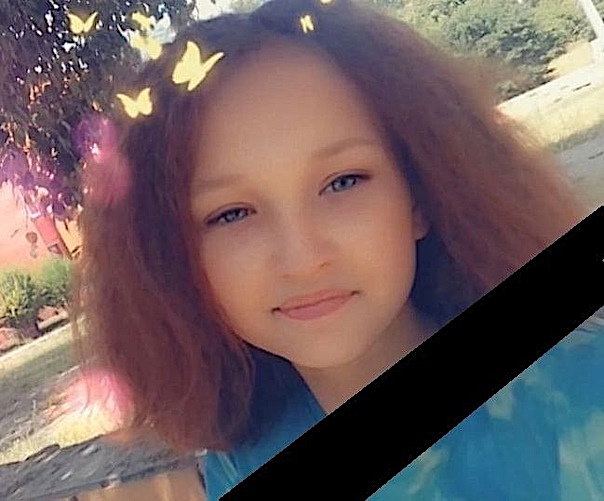 And yet there was no outcry, or even any mention, of this hideous and brutal attack on the schoolchildren of Donetsk in the Western mainstream media, and even on social media, for every person who mentioned and condemned these attacks, there were 100 ignorant zombies with pro-Ukrainian flags and slogans on their pages. Which begs the question, what is the difference between Ramos' despicable attack in Texas, and the ukrop nazi attacks in Donetsk? True, Ramos killed more kids (both attacks killed 2 teachers each) but both legally and morally, it is the intention that counts, as much or even more so than the actual result, and had the ukrop attack gone as planned, the carnage would have been much, much more. And Ramos attacked only one school, with a rifle, the ukrops attacked three schools (an elementary school, a kindergarten and a science academy) simultaneously, with some of the most powerful weapons in modern military arsenals. And of course, one last difference, Ramos' crime was reported and condemned around the world, the ukrop crimes were barely mentioned anywhere in the West. And in this case, to ignore these crimes is to condone them. And to condone them is to encourage them, to be a part of them, to personally own a share in the guilt of them. 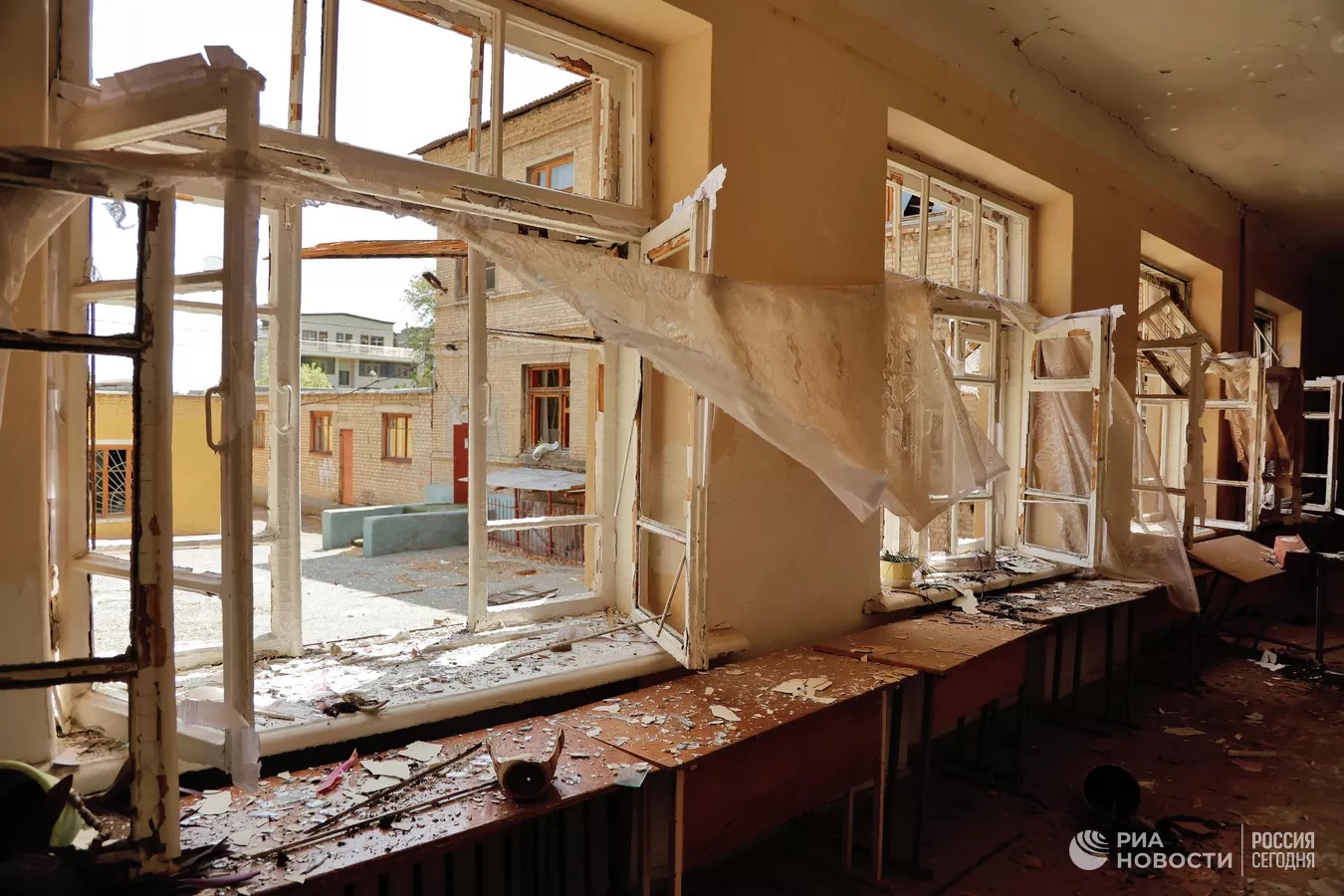 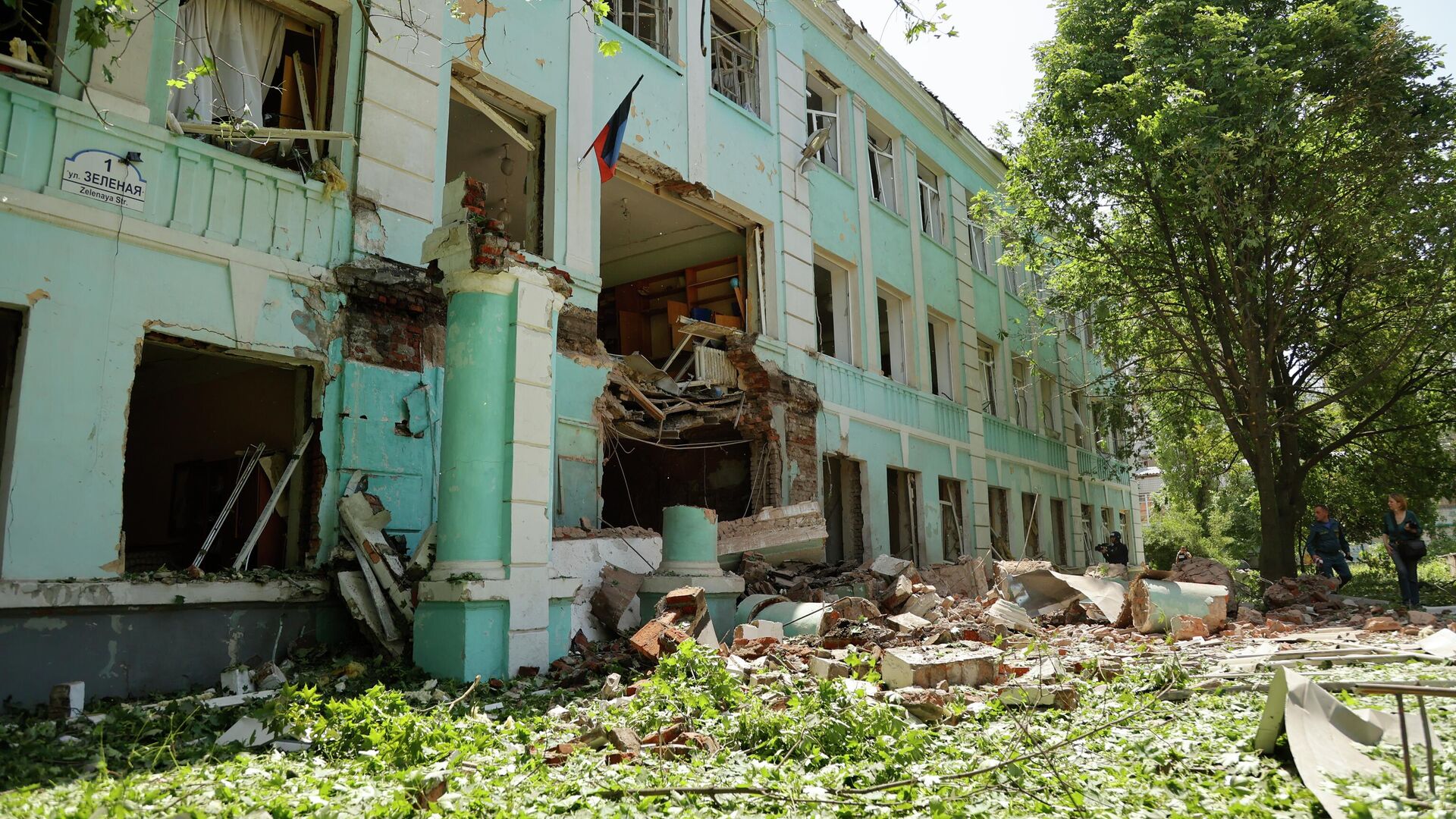 To be silent about these crimes is to be complicit in them, to encourage them. And Western silence did encourage them, because less than a week later, on the evening of June 4th, 2022, ukrop nazi bombers struck Donetsk again, this time at six schools - the same 3 schools they had attacked on May 30th, plus three more, again, with pinpoint accuracy, again, with the heaviest artillery in their arsenals, again, specifically targeting schools. And again, not a peep from the Western mainstream press or the millions of US and EU idiots and assholes with Ukrainian flags and slogans on their social media. So, again with their complicity and encouragement... 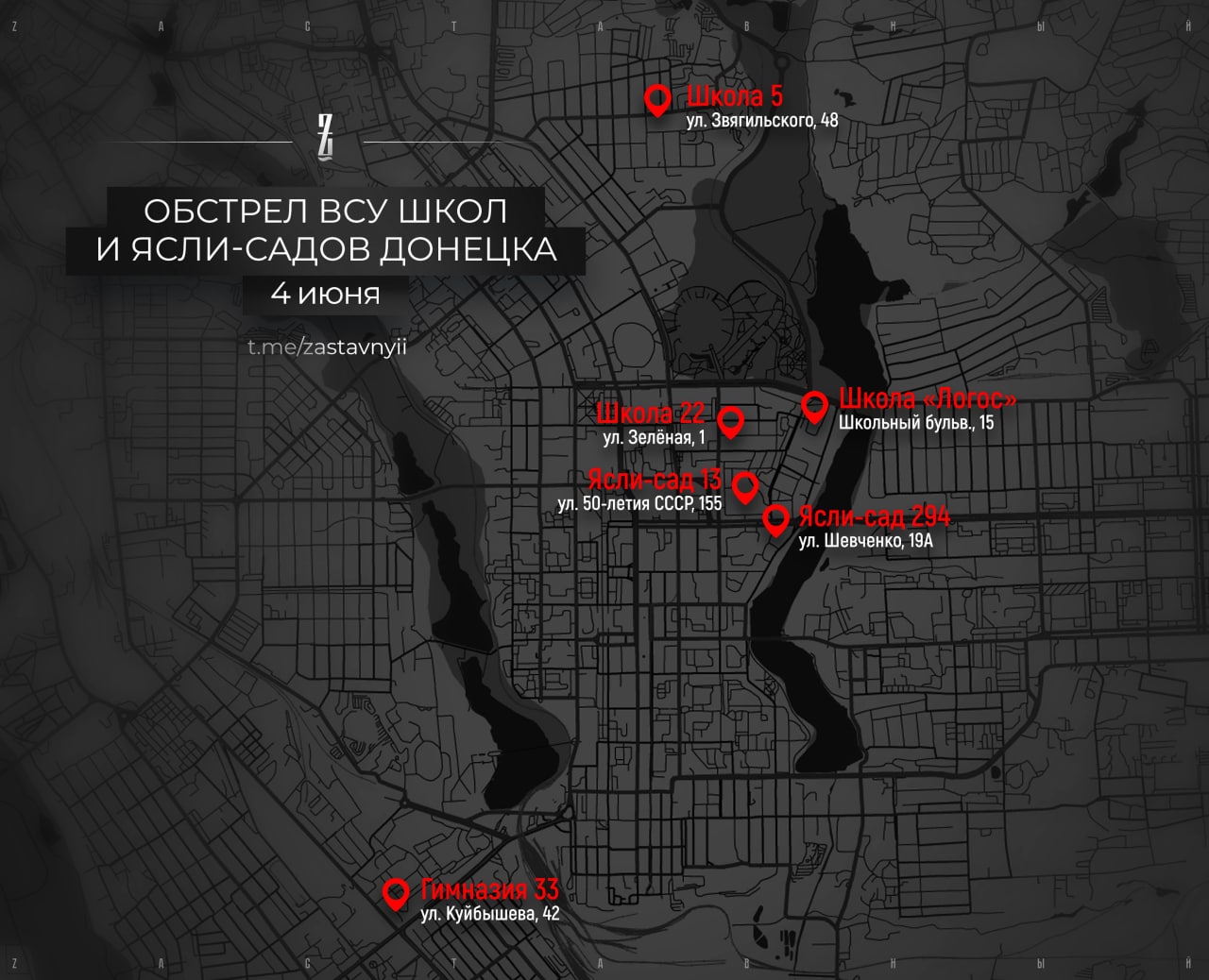 And it is not just by their cowardly silence that US and EU citizens collaborate with the crimes of the ukrop nazis and their Western masters, because these same US/EU regimes, ruled by a parasitic criminal oligarch class, are the ones who pay, arm and direct the actual nazi killers who pull the triggers in Ukraine. Imagine your neighbor giving blood-thirsty psychopath degenerates like Salvador Ramos not just guns, but cannons, pointing them at your children's schools, and giving them carte blanche to fire away all they want.

Imagine. We don't have to imagine, because that is exactly what you have done to us, and to our children, in real life, right here, where we live, less than a month ago. Exactly as you and your masters have done ever since they started this war, 8 years ago. And the psychos you've armed and encouraged have only gotten much more aggressive since.

The heaviest attack on the city of Donetsk since the war began in 2014 occurred on Monday, June 13th, 2022, just a week after the attack on the 5 schools, which was less than a week after the attack and attempted mass murder of civilians and school children committed on May 30th. Almost 300 artillery shells and heavy rockets were randomly fired at civilian areas of the major city centers of the DPR over the course of about two hours. At least 5 civilians (including another child) were killed, and scores were wounded in this single attack. Nothing is done in Ukraine without the permission and on the specific instructions of their foreign masters in D.C., and with the connivance of the willing lapdogs who rule the EU. One of the very few mentions of this horrendous attack in the West was by German TV program "Taggeshau", which had the effrontery to actually broadcast the absolute lie that it was Russia that bombed Donetsk. And this is hardly the first time pro-nazi propagandists have told lies that were literally the exact opposite of the truth, blaming the crimes of ukrop nazis and their US/EU masters on the very Russians who are defending civilians from them. (See HERE.)

These crimes are every bit as much the crimes of Brussels and Washington and Kiev, as they are the crimes of their nazi henchmen in Avdeevka that fired the actual cannons themselves. And if the subjects of a corrupt regime do not stop them, by whatever means necessary, then they too are also responsible for the crimes of their rulers, before the laws and judgement of both God and man, whether they like them or not, and whether they like it or not. And make no mistake, the Day of Judgement is coming, and sooner than you might think.

So how dare anyone condemn a malignant loser like Ramos for his brutal and bloody crime, and yet maintain silence about the even more bloody and brutal crimes done by their own governments, with their own craven complicity, financed with the tax dollars they willingly contribute to those crimes, and encourage and support, not just with cowardly silence, but even with public support for the murderers in the form of the blue and yellow rag on social media profiles, or lawn signs and bumper stickers.

If you "Stand with Ukraine", you stand with nazis, rapists, torturers and the mass murderers of innocent and defenseless civilians and children. And if that is what you are, then so be it, but if so, admit it, do not be the most contemptible kind of liar that there is - the one who lies to himself. If that's what you are, own it, admit it. Be like your AZOV nazi heroes who revel in their murderous evil and depravity, shout it out, and share it with the world. Don't be a coward and a liar and a hypocrite. If you "Stand with Ukraine", you stand with Salvador Ramos every bit as much. So here is a flag I have made for you, and people like you, for your Facebook pages and your bumper stickers and your yard signs, so you can share with all the world, and show who and what you really are... 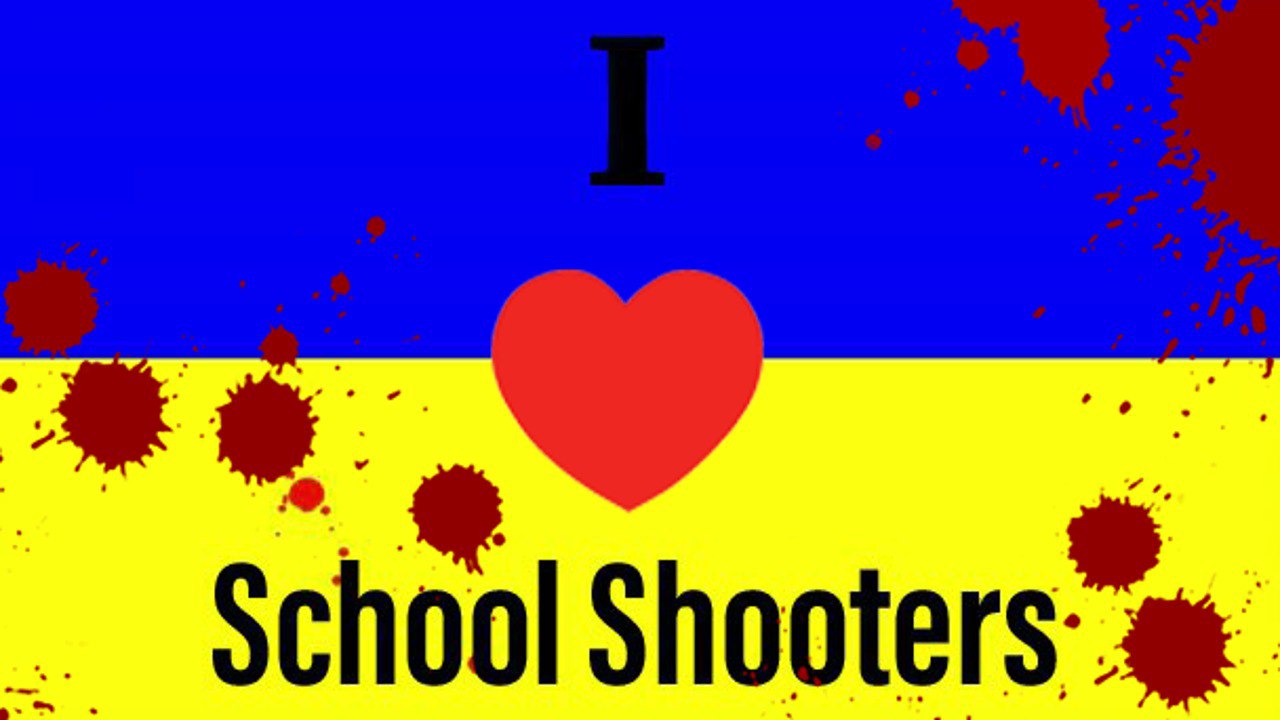 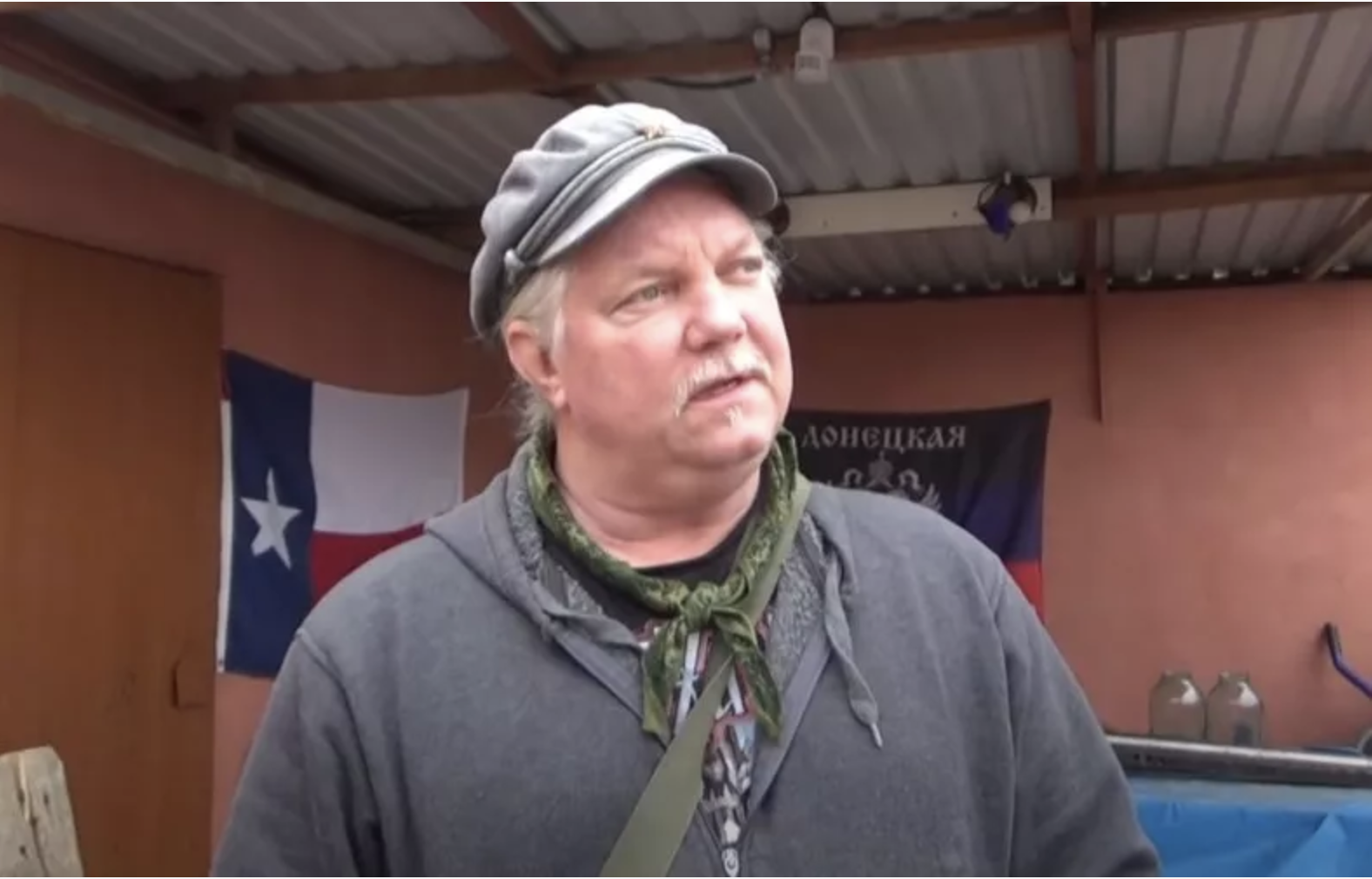 Russell Bentley was born in the US state of Texas in 1960, and he became interested in communism at the age of twelve after reading the works of men such as Ho Chi Minh and Che Guevara. Russell joined—at the tender age of 54— the Novorossiyan Armed Forces (NAF) to fight what he sees as the attack on the Donbass people by an illegitimate fascist entity: the Kiev regime installed and supported by the US after a thinly-veiled coup. His example evokes the deeds of the Lincoln Battalion, the American volunteers who fought in the Spanish Civil War. As his writing gifts abundantly prove, he also channels John Reed and Hemingway in a rare, seamless, package.  By July 2016, he had been baptized into the Russian Orthodox church.

Thank you Russell, for your powerful and truthful article! Indeed an indictment of all those in the west who ‘stand with ukraine’ nazis. May the Ukro-nazi perpetrators of these crimes get annihilated, soonest. And may the Donbass people finally get the peace and prosperity they deserve.
regards, Ron