Why Ukraine is always winning the war

"It is one thing to dismiss the criticism of your enemies, but the criticisms of your friends merit some refection..."

October 25, 2022 8 minutes read
Please make sure these dispatches reach as many readers as possible. Share with kin, friends and workmates and ask them to do likewise.

by Ramin Mazaheri for the Saker blog 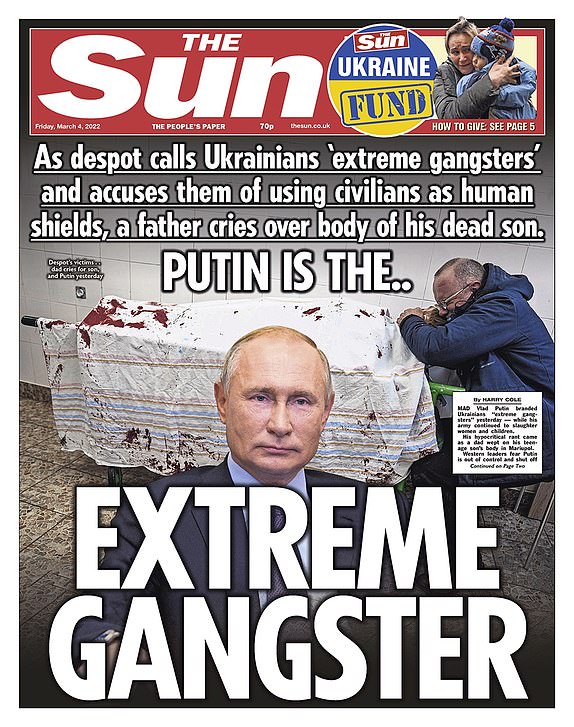 The British media has outdone even the Americans in their obnoxious servility to the Western oligarchs.

In the United States media editorial policy has not wavered on one subject this year: Ukraine is always winning the war.

From the first week, when the Ukrainian air force and navy were smashed, to last week’s smashing of the electrical grid – this is what “victory” looks like in the Ukrainian language, apparently. The Russians can electorally incorporate territory after territory, but to suggest that Ukrainian victory hasn’t already arrived is verboten in American public spaces.

What is the point of reading American coverage of the unrest in Ukraine when it’s so very absurd?

The point is: to learn what America is thinking, of course. If it’s deluded then – like it or not – that’s the story, and the story always writes itself in honest journalism.

I was talking with a Polish cab driver whom I found extremely intelligent, and not only because he has an Iranian brother-in-law and thus knew and respected Iranian culture. This longtime immigrant cabbie was very pro-Ukraine and anti-Russian, which is his right and not unexpected, and he was a typical Pole in that he was ardently pro-American. However, he volunteered to me that he found Americans to be the most effectively propagandised people in the world – he said they, invariably, merely mouthed whatever they heard on TV news.

It is one thing to dismiss the criticism of your enemies, but the criticisms of your friends merit some refection.

I have also personally found the same iron-jawed retention of dogma: Americans tell me that only in very recent weeks have they heard anyone even suggest the idea that the war isn’t going well for Ukrainians. I agree, as I have yet to hear such a remark (outside of interviews of political analysts for my work at PressTV), and I have gotten many strange stares when I brought up the idea – in my personal life – for discussion.

It is happy news for Americans to talk about, after all: “Hey, did you hear? The Ukrainians are winning the war! Still!” However, it is my role in the US to be a wet blanket whenever discussions turn political, I lament.

When the subject of Ukraine comes up I start with the fact that I have lived in France for over the past decade and – because France is usually at the heart of European diplomacy – I have been reporting on the Ukraine unrest since 2014. At the mention of the idea that Ukraine existed before February 2022 a glaze goes over their eyes.

Similarly, someone recently congratulated me on the Iranian revolution. What a pleasant thing to hear, thank you! Unfortunately, this person was referring to the current anti-hijab law unrest and not 1979. Just as Ukraine is winning the war, so this person was convinced that these protests have effectuated a (counter-) revolution. When it comes to Iran the American “this information cannot be allowed to even momentarily penetrate my mind” eye-glaze starts sooner – it arrives at the very first contrary word I utter.

I bring up Iran to show the pattern: Ukraine has always been winning, is winning currently and will win in the future because the US always wins every war it embarks upon.

After all, the US was always winning the war in Afghanistan. The only internal disagreement ever allowed was regarding their total retreat in August 2020 – was it poorly planned, or not? If the former, then the total US victory was disgracefully (though merely slightly) tarnished by the total US retreat.

The crime committed by the average American is neither malice nor negligence but the fault of naiveté – their expectation that a media dominated by private and not public ownership will ever consistently produce journalism which benefits the people and not the rich owners. Call it Western Liberal Democracy or the American Way or neoliberalism: history shows that it has always failed, is failing and will only fail for the 99%.

The US was always winning the war in Iraq, as well. Shock and awe prevailed from start to finish, with the finish being a total shock at how few positives the US-led war created for either the Iraqis or the Americans. The indisputable fact of the American victory, however: totally awesome, of course.

The Balkanised disaster which is Libya? Another victory. Assad still standing in Syria? Still a victory, though don’t ask for explanations. Cold wars in Iran, Cuba, Venezuela, North Korea, Nicaragua and any other revolutionary country? Victory is so close the US media can see it, they insist.

These foolish political mis-notions cannot be blamed on the average American: all these places are so far away and so far removed from the totally precarious daily rat race/shooting gallery which is American life, and the information they can find is so incredibly one-sided.

Negligence can constitute a crime, indeed, but we must learn that here there is not actual malice: I was not shocked to do a report on a top foreign policy poll which showed that 79% of Americans want peace with Iran. This is even the foreign policy issue which earned the most unanimity, excepting only one: by one percentage point more, Americans want more legislative control over the executive branch’s ability to wage war – i.e., they want more peace.

The crime committed by the average American is neither malice nor negligence but the fault of naiveté – their expectation that a media dominated by private and not public ownership will ever consistently produce journalism which benefits the people and not the rich owners. Call it Western Liberal Democracy or the American Way or neoliberalism: history shows that it has always failed, is failing and will only fail for the 99%.

The US media and politicians know which levers to pull to produce naiveté: note how it’s always the “Ukrainian people” against “Putin” – there are no Russian people. Putin, of course, is not an actual person either – he’s a monster.

Which side could a busy soccer mom possibly be expected to take, especially when trying to have pleasant chit-chat with other busy soccer moms? Why, the only American thing to do is to buy that $25 pro-Ukraine scented candle and display it proudly for others to envy….

In the United States Ukraine will always be winning the war, no matter what actually happens in the war. When their destructive loss is indisputable, that will be unimportant – the US will certainly be in the middle of winning a new war.

Ramin Mazaheri is the chief correspondent in Paris for PressTV and has lived in France since 2009. He has been a daily newspaper reporter in the US, and has reported from Iran, Cuba, Egypt, Tunisia, South Korea and elsewhere. His latest book is ‘France’s Yellow Vests: Western Repression of the West’s Best Values’. He is also the author of ‘Socialism’s Ignored Success: Iranian Islamic Socialism’ as well as ‘I’ll Ruin Everything You Are: Ending Western Propaganda on Red China’. .

With the UN made into an American bitch, the Kiev regime is given carte blanche for its crimes

Why I Think This Is An American Plan

I am making $90 an hour working from home. I never imagined that it was honest to goodness yet my closest companion is earning $16,000 a month by working on a laptop, that was truly astounding for me, she prescribed for me to attempt it simply.
Everybody must try this job now by just using this website.. http://www.maxjob3.com

As to Ramin’s article above, the western (mostly ‘financially’ enslaved) people will always be ‘hoodwinked’ by their diabolical elite masters as were the Germans and Japanese people for examples until the bombs (nuclear for Japanese) started falling on their heads. For now it’s the Ukrainian people’s turn, luckily for them, at least so far anyway, the Russians considers them their (in effect) ‘kidnapped’ family. Otherwise, they would have already been looking like, end of world war II Germany, for example.