EVENTS CONTINUE to demonstrate that sooner rather than later the protest movement may need to organize itself into a tougher, better organized party of the working people. 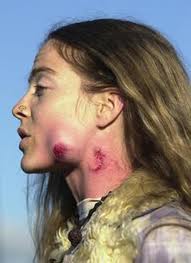 The Occupy Wall Street protests against inequality, which began in New York City over a month ago and have since expanded to hundreds of cities and towns throughout the United States and internationally, have arrived at a political crossroads.

The ruling class has responded with a two-pronged strategy. Attempts to channel political discontent back within the political system have been combined with a growing wave of arrests and stepped-up police violence.

#OccupyOAKLAND protester (left) wounded by police in recent clashes. Where’s the outcry in the media, and above all, Obama and the rest of the politicians?

The latest action was the most brutal. Hundreds of police officers from 12 agencies, decked out in riot gear, surrounded an encampment in Oakland, California early Tuesday morning. Under the direction of Democratic Party Mayor Jean Quan, the police used tear gas, bean bag guns and a sonic cannon to attack and arrest about one hundred peaceful demonstrators and lay waste to the occupation site. 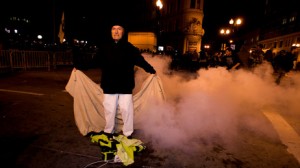 Riot police maintained a heavy presence in Oakland throughout the day. In the evening, hundreds of police met further demonstrations with more tear gas and flash grenades. There were reports of many injuries. Arrests have been carried out in dozens of US cities, including New York, San Francisco, Dallas, Philadelphia, Cincinnati, Phoenix and Denver. Across the Pacific Ocean, encampments in Sydney and Melbourne, Australia have been forcefully shut down and the participants rounded up.

These acts of political repression—which if they occurred in Iran or Syria would be condemned by the US political establishment and media—are being carried out with the tacit approval of the Obama administration. Quan’s order came two days after Chicago Mayor Rahm Emanuel, Obama’s former White House chief of staff, oversaw the arrest of 150 protesters.

For his part, Obama has said nothing about the crackdown. On Tuesday, the president was only a few miles away from the Oakland repression, attending fund-raising events across the bay in San Francisco.

While the immediate target is the Occupy protesters, the repression is also a dress rehearsal for broader social struggles on the horizon. Under both Bush and Obama, the state has made deep inroads into basic democratic rights. The pretext is the “war on terror,” but the real target is domestic opposition to the demands of the corporate elite.

The increasing repression poses all the more directly the fundamental political issues raised by the protests, above all the necessity for a political struggle against the Obama administration, the Democratic Party and the capitalist state. Even as it carries out mass arrests, the Democratic Party and its adjuncts—from the trade unions to a variety of middle-class “left” organizations and academic celebrities—are continuing their attempts to channel opposition behind the Democrats and Obama’s reelection campaign.

The political perspective of these organizations, of pressure on the Democratic Party, has been thoroughly exposed by the experience of the Obama administration, which in all of its policies and in its very composition is a government of, by and for Wall Street. The repression by the state provides its own answer to all those who claim that the rights of the working class can be secured through the existing political system.

The Occupy movement is an initial expression of overwhelming popular hostility to the banks and corporations. However, the basic questions of program and perspective have only begun to be addressed.

What is posed above all is the necessity for the independent social and political mobilization of the working class, the vast majority of the population in the United States and internationally. Every factory, workplace and neighborhood must become a center of resistance to the policies of the ruling class and its political representatives.

The past three decades were dominated by the artificial suppression of the class struggle, in which the trade unions played the central role. Strikes virtually disappeared in the United States, even as the wealthy accumulated a share of the national income without precedent since the 1920s. Where struggles erupted—as in the demonstrations of hundreds of thousands in Wisconsin against budget cuts and attacks on workers’ rights earlier this year—the unions worked to direct them back behind the Democratic Party in order to betray and defeat them.

Twenty years ago, the collapse of the Soviet Union was followed by proclamations by the propagandists of the ruling class of the “end of history” and the demise of the class struggle. The official “left” played its role by attempting to suppress any discussion of class in favor of the various forms of identity politics. Socio-economic class was presented as an altogether subordinate category to race, gender and sexual orientation.

The events of this year have exploded these conceptions. From the revolutionary upheavals in Egypt, to mass demonstrations in Israel and social eruptions in Europe, the class struggle has reemerged as the basic historical force. The Occupy movement itself foreshadows an explosive eruption of class struggle in the United States, the center of world capitalism.

The reemergence of working class struggle is rooted in the crisis of the capitalist system and the response of the ruling class to this crisis. Hundreds of millions of people around the world, unable to tolerate the conditions imposed upon them, are beginning to fight back.

If the events of this year have confirmed the centrality of class struggle and the objective basis for a socialist movement, they have also confirmed that the successful prosecution of the class struggle is impossible without politics.

Those within the Occupy movement who preach “no politics” and “no leadership” serve to maintain the stranglehold of the prevailing politics. It is precisely leadership and politics—that is, a party and a program—that are required above all.

The unconscious historical process that is bringing millions of people into struggle against capitalism must be transformed into a conscious socialist political movement of the international working class.

The basic aspirations expressed in the Occupy movement—including above all the fight for social equality—cannot be achieved within the framework of capitalism, in which economic and political life is subordinated to private profit. A movement of the working class must be aimed at establishing a workers government, which will have as one of its first tasks the transformation of the banks and major corporations into publicly owned and democratically controlled institutions.

The Socialist Equality Party in the United States and its sister parties around the world are spearheading this struggle, and we urge all workers and youth who want to take up this fight to join the SEP.

Joseph Kishore is a prominent member and political activist with the Social Equality Party.