Home AMERICAN DUPLICITY A nation overrun by criminals, lunatics, and assholes. Even the Daily News can’t take it any longer.

A nation overrun by criminals, lunatics, and assholes. Even the Daily News can’t take it any longer. 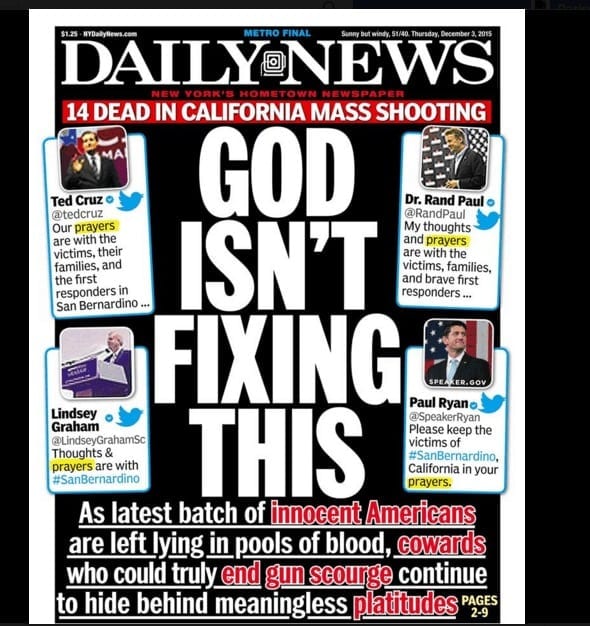 That god, tho.
SPOTTER: STEVEN JONAS

A longtime Loyal Reader™ sent us an image of yesterday’s New York Daily News cover, which we found quite interesting.

The Daily News, if you are blissfully unacquainted, is a New York metro-area tabloid that could perhaps best be described as the unholy offspring of the city’s two other daily rags, the execrable New York Times and Rupert Murdoch’s bird cage liner The New York Post. Its editorial slant is yawningly predictable and pro-status quo; its coverage of the pope’s recent visit, for example, fawning. In a word: conservative. That is why it is extraordinary to see this headline in giant screaming letters: “GOD ISN’T FIXING THIS.” The “this” refers to the latest shoot-’em-up that as of this writing has left 14 dead in San Bernardino.

I don’t know about you, but I read that as a scathing rebuke of some god or other (it’s not entirely clear to me which one). To add insult to injury, the cover features tweets from four prominent Republicans posturing about prayer—their single, inept and reflexive response to such tragedies—and highlights the fact that these very “cowards” are among the only few people on Earth in a position to actually do something about US gun violence. Then, as a final insult to Zeus (or whoever), prayers to the deity in question are openly derided by the Daily News as “meaningless platitudes.”

This is fantastic news, obviously: I think it’s fair to surmise that the paper’s editors have been reading my blog and finally taking the importance of god mockery to heart, if I do say so myself. 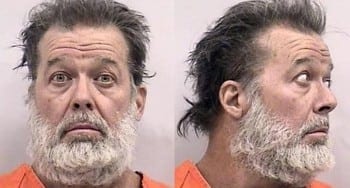 The Planned Parenthood lunatic. Grade-A homegrown terrorist. And a conservative Christian, naturally. They don’t make assholes of this magnitude every day.

Anyway, speaking of shitty gods and shitty people, it will come as no shock to readers that the recent Planned Parenthood terrorist—who I will not name here because seriously, fuck him—is a conservative Christian, a violent, abusive, controlling, misogynist, rapist, stalker and wife batterer, with a looooong history of shitweaselry. It’s all good though, because his god totally forgives him for anything and everything he does, no matter how evil. One of his three ex-wives said in court papers, “He says that as long as he believes he will be saved, he can do whatever he pleases.” Christ, what an asshole. By which of course I mean the god Christ is a fucking asshole. This is the kind of shit he is only too happy to forgive:

[He] reportedly began to harass the woman on and off the clock. He followed her to her home and on Nov. 29, 1992, he reportedly ambushed her as she attempted to take out the trash.

The assault continued with [the conservative Christian] dragging the woman into a bedroom and continuing to rape her there.

His second wife, to whom he was married at the time of the rape, described the Christ-forgiven rapist in divorce filings as “controlling, abusive and serially unfaithful.” She said he “routinely gambled away the family’s money [but] was ever reluctant to provide for his wife and children financially.”

Hot-tempered and unstable, he “erupts into fury in a matter of seconds,” said [the evangelical Christian’s] second wife Barbara Mescher to attorneys. In her time with [the devout follower], she testified, she continually “lived in fear and dread of his emotional and physical abuse.”

“[The white male] has a history of arrests in South Carolina out of Colleton and Beaufort counties, records show,” said the Post and Courier‘s Glenn Smith and Melissa Boughton. “A background search completed by The Post and Courier found that [the conservative man] was arrested in 2003 on a cruelty to animals charge but was found not guilty in 2004. He was charged under the state’s Peeping Tom law in 2002 but that charge, too, was later dismissed, according to a background search.”

Hey, if the god of the bible forgives him, why even bother to prosecute amirite?

Now okay, I admit it, here is where I get a little…confused. A timely report on a survey just issued by a Christian organization reveals that Jeezus followers have the most abortions, by far:

Surely this Jeezus can forgive them too, and presumably doesn’t need the likes of this asshole shooting at police and executing strangers on his behalf? Wow, theology is hard!

But if you take nothing else away from this little rant, take this: forgiveness is overrated. And so are gods.

The Palace hereby extends a royal welcome to all of its new readers at the New York Daily News editorial board! Watch and learn, editors. Watch and learn.

Have a nice day. 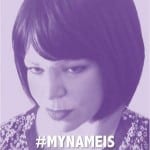 Iris Vander Pluym is an artist and activist in NYC (West Village), and an unapologetic, godless, feminist lefty. Raised to believe Nice Girls™ do not discuss politics, sex or religion, it turns out those are pretty much the only topics she ever wants to talk about.

The Islamic State’s Theater of the Grotesque

i think your article is a little off the mark. false flags are not fixed by you saying ‘fuck him” to the so called terrorist either.