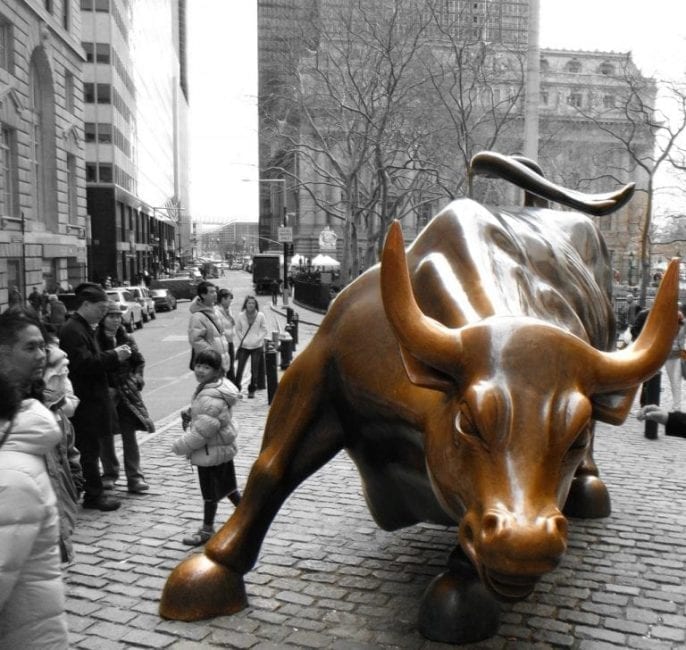 For all the pomp and circumstance of Donald Trump’s Beijing trip, its most interesting outcome was a Chinese overture to the titans of global finance, currently ensconced in Wall Street and London. Given the big banks’ position at the apex of of the Western power structure, the move is highly strategic and bears close watching.

Specifically, the watershed has two components. The first is the accord between CIC, China’s top sovereign wealth fund, and Goldman Sachs to set up a USD 5-billion fund to invest in US companies exporting to China. The choice of American partner is significant, of course. Goldman is the most powerful bank in the US and probably the world, the quintessential Wall Street player. Its alumni routinely occupy top positions in the US government, including the present Treasury Secretary. Where Goldman goes, the US power structure often follows.

Beijing’s other move is to open financial institutions to 51% ownership by foreign entities — something Western global banks have long been clamoring for. The CPC leadership is only too aware of the potential disruption, even sabotage, that could result from a too-fast opening of the supremely strategic finance sector. Over the years, Beijing has never hesitated to slow or suspend the process whenever circumstances warranted. That it is now taking this step means China is confident that domestic and international conditions are ripe.

Editor's Note: Despite the author's optimism, we look with trepidation on the idea of giving certifiable vultures like Goldman Sachs 51% of anything in the top tiers of the Chinese financial structure. This may be a case of necessity to defuse the threat of US attack from within, and if so, well, let's hope it pays off in peace. China needs the time to become stronger and eventually invulnerable.

Would these moves make China vulnerable to predatory forces behind the Western banks? Probably not. The deal with Goldman is clearly a pilot experiment to bring the icon of Wall Street into the game; it is not big enough to do any real damage, even if things go wrong. But it could become a hook to pull Wall Street’s financial power and know-how in to benefit China and even the Belt & Road Initiative, on predominantly Chinese terms. As usual, Beijing will adopt its time-tested strategy of “feeling the rocks underfoot while crossing the river” — advancing only when the right rocks are felt and retreating otherwise.

The 51%-ownership initiative, by now, is not something China needs fear. One reason the CPC is launching it is because it believes that domestic players are ready for the still-limited competition the move would bring. (Foreign banks’ share of the Chinese financial market is currently less than 2%.) In fact, the opening is not aimed chiefly at attracting more foreign investment, as many international observers erroneously believe. According to industry insiders, it is to further the competitiveness of Chinese financial institutions by obliging them to compete alongside established global entities, in an environment managed by Chinese authorities. That would pave the way for Chinese banks to take on the world.

So the door of Chinese finance has opened another significant notch to global capital. In the past week, Beijing has concurrently introduced other sweeping measures, largely to enhance its ability to oversee domestic financial markets and minimize abuses.

Only time will tell whether the interaction between Western-controlled capital and China will be fruitful. Many will be cynical, given the historical record. But today’s China is unlike anything global capital has ever taken on. Like it or not, the world is increasingly interconnected. And if China and Big Money do find ways to produce win-win, all humanity would benefit.

About the Author
Thomas Hon Wing Polin worked as an international journalist based in Hong Kong, specializing in Greater China and Asian affairs. He was a top editor at Asiaweek, the Asian newsweekly, and served as founding editor of the magazine's one-time Chinese-language sister publication, Yazhou Zhoukan. Now a private investor and sometime journalism teacher at the University of Hong Kong, Tom also works with some of Hong Kong's leading Buddhist organizations.He was born in Hong Kong, and was educated there and at Columbia and Harvard universities in the United States.

THOMAS HON WING POLIN—So the door of Chinese finance has opened another significant notch to global capital. In the past week, Beijing has concurrently introduced other sweeping measures, largely to enhance its ability to oversee domestic financial markets and minimize abuses.

The affiliation with GoldmanSachs, which almost owns (am using “almost” charitably here) the US government could be not so much a business move as it is a political act of deterrence by simply bribing these colossal vermin. That said, China can definitely now benefit from an internal understanding of how these strains of sociopolitical and economic disease really operate. We just don’t want to see China take a harder “finance capitalist” road than absoltely necessary, if at all.

Agree! Goldman-Sachs can tell its Pentagon servants to go make trouble somewhere else and leave China alone—for the moment. After all, its the capitalist tycoons who call the shots with the Pentagon, always have. At least since the 1930s.