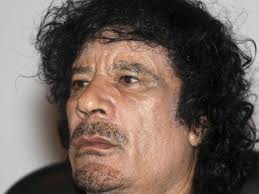 My local newspaper informed me this morning that with the killing of Muammar Gaddafi the “Libyan people can finally turn the page on 42 years of vicious oppression.”

The oppression began with Gaddafi liberating Libya from the tyranny of the puppet ruler King Idris I, whose flag has become the banner of the rebels.

It continued with Gaddafi’s expulsion of foreign military bases and his nationalization of the country’s oil.

Further oppression was heaped upon Libyans when under Gaddafi’s rule living standards rose to surpass those of every other country in Africa.

Certainly, Gaddafi’s fight to suppress the Libyan Islamic Fighting Group—whose members fought the Americans in Afghanistan and Iraq and struggled alongside Osama bin Laden against the Soviets in Afghanistan—added to the oppression.

The leader of the LIFG, Abdel Hakim Belhaj, once jailed by the Americans for terrorism, is now the military ruler of Tripoli.

Gaddafi’s insistence over the objections of US oil company executives and State Department officials that the Libyan economy be “Libyanized” (that foreign investment be turned to the advantage of Libyans) cranked up the oppression a notch or two further.

Which pro-democracy forces fought back against these oppressions?

• Qatar, an absolute monarchy, which sent guns and ammunition to Islamist rebels.

• Monarchists, still incensed at the overthrow of their king.

• Islamists, who for years had struggled to bring an Islamist regime to power in Tripoli.

Over the last few weeks, Nato warplanes occupied themselves with reducing the town of Sirte to rubble – in the name of protecting civilians. It turns out that it’s all right for Nato to bomb civilians, but not for the leaders of independent governments to put down insurgencies.

While these forces battled Gaddafi’s oppressions, US-provisioned Saudi tanks rolled into Bahrain to crush a popular uprising, the US-backed ruler of Yemen, Ali Abdullah Saleh, turned his guns on his own people, and US-approved Mubarakism continued in Egypt, under Mubarak’s henchmen.

These events—all involving US allies–have been little remarked upon. More importantly, none have been met with military intervention or indictments by the International Criminal Court, these attentions being reserved uniquely for Gaddafi.

It’s true that the Libyan people can finally turn the page on 42 years, but of independence, not of vicious oppression.

Nato military bases, an economy subservient to Western oil companies, and the oppressive yoke of US imperialism, await them.