By Stephen Lendman
Pointing the finger hypocritically and with total impunity at other nations’ election processes is made possible by the totalitarian and pervasive power of American media. In all critical topics for the health and survival of the nation and the world, the US corporate media function as a colossal engine of omission, escapism and disinformation, a huge criminal enterprise, a consciousness plague, by any reasonable standard.—Eds. 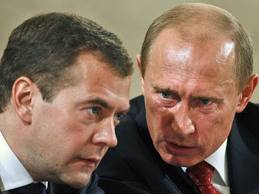 It added that it’s “a far cry from the commanding two-thirds constitutional majority the party held in the State Duma for the past four years” based on tabulated results so far.

United Russia is the nation’s dominant party. In December 2001, it was founded by merging the Unity and Fatherland-All Russia parties.

Vladimir Putin served as acting President after Boris Yeltsin resigned on December 31, 1999. From May 7, 2000 – May 7, 2008, he was President. Dmitry Medvedev succeeded him. Putin now serves as Prime Minister. He’s United Russia 2012 presidential candidate. On March 4, presidential elections will be held.

After a decade in power, it’s common for incumbent parties to lose strength. Nonetheless, despite likely coalition agreements on some issues, United Russia remains dominant. Moreover, Putin’s heavily favored to win in 2012.

With near final Duma votes counted, results were:

Under Russian electoral laws, Duma seats are proportionally distributed to parties getting at least 7% of the vote.

“We will have to take into account the more complex configuration of the Duma and for some issues we will have to join coalition bloc agreements.”

Ballots were cast in 94,000 domestic polling stations across Russia and about 370 overseas locations in over 140 foreign countries.

“Critics of the government have said for weeks that they expected widespread campaign abuses, and reports of electoral violations streamed into online social networks during the early morning hours….”

On December 5, Russia Today (RT.com) reported that on election day, a Russian Internet site claimed an alleged United Russia scheme “to conduct an illegal throw-in of ballots at one of the polling stations in Moscow.”

It said “some obscure political specialists had gathered a group of about 40 people, described as ‘drunks and low-lifes,’ and handed them special secret pockets and packs of filled ballots, marked United Russia.”

In fact, three of the 40 were undercover reporters. When the alleged group arrived, they claimed fraud. Other reports about throw-in ballots also surfaced. A top Central Election Commission (CEC) official admitted some violations occurred.

However, the invisible ink scheme was uncovered and stopped.  “Merry-go-round” fraud was grossly exaggerated. Only minor violations occurred. They’re common everywhere in contrast to major US electoral fraud.

In addition, key Senate and House elections were also tainted. No wonder under a system where corporate-controlled machines vote, not citizens.

Ivlev said “many reports (about alleged Russian electoral fraud) simply showed a lack of understanding of the election procedure.”

Independent (CEC-invited) international monitors checked voting in over 30 Russian regions. They concluded the process was calm and orderly. Polish monitor Mateus Piskorski said, “All complaints are about technical issues and not about violations of election law.”

It added that throughout the day, scattered reports cited “voting irregularities, a smattering of protests and some arrests.”

In contrast, when the Supreme Court reversed America’s 2000 popular vote (and electoral one learned months late) to install its own favorite, a Times editorial supported Bush’s illegitimacy and “unusual” post-election “gracious(ness).”

Electoral fraud wasn’t mentioned nor was cheating John Kerry in 2004. Moreover, America’s corrupted duopoly power gets no coverage whatever.

Instead, reports claim model US democratic governance when, in fact, it’s not tolerated, never was, and on December 1 lost all legitimacy.

On December 3, its editorial headlined, “The farce of Russian elections,” saying:

“Russia’s hermetic political system – a parody of democracy that begrudges dissent and bristles at independent voices – is growing even less tolerant.”

“Vladimir Putin has turned from glowering at the country’s only independent elections watchdog to outright intimidation. In the process, he has reverted to Cold War rhetoric and cemented the Kremlin’s reputation for thuggery in high places.”

In contrast, Iran’s Press TV, Russia Today and Voice of Russia air diverse discussions and opinions on major global issues. US viewers can access them online to stay current and well-informed, free of [the] Western propaganda tainting America’s media.

Putin is one of the few world leaders with backbone enough to challenge US lawlessness. As a result, America’s media pillory him instead of explaining destructive US policies threatening humanity’s survival.

Russian officials “turn(ed) up the heat on Golos (Russian for ‘voice’), an independent group of election monitors largely funded by US and other Western groups.”

Golos gets National Endowment for Democracy (NED) funding. It supports “regime change” in Venezuela, Syria, Iran and other non-US client states. It backs opposition groups, conducts propaganda campaigns, and does openly what CIA operative do covertly to destabilize sitting governments.

Its mission is subverting, not promoting democracy. It operates with State Department funding and direction. It serves US imperial interests destructively against targeted countries.

So do USAID and the National Democratic Institute (NDI). They meddle internally against sitting governments. One way is by funding Golos. It calls itself a Russian NGO established in 2000 to defend democratic rights and civil liberties. It’s Russia’s only allegedly “independent” electoral watchdog.

The UK Telegraph calls it “one of the few organizations able to catalogue and publicize (Kremlin) attempts at fraud and intimidation.”

In contrast, Washington meddles regularly in elections abroad to influence their outcomes. America’s media suppress what they should headline. Instead, they endorse illegal foreign funding and other illegal practices.

The Washington Post claimed Golos NED, NDI, and USAID funding lets them “be impartial.” It also said Putin’s likely reelection next year means “growing number(s) of Russians (will) chafe (under) a system that takes his commands and uses the niceties of democracy, including elections, as window dressing.”

It added that he’s “never been one to settle for simple victory when unchallenged supremacy can be gained by use of threat, political manipulation and bullying.”

His “loyal lieutenant (Medvedev) warned that Russia may aim missiles at US anti-missile installations in Europe, which are intended mainly as a shield against Iran, unless the Obama administration agrees to a set of Russian demands. He also threatened a Russian withdrawal from (the START) nuclear arms reduction treaty.”

America has well over 1,000 global military bases. Many encircle Russia and China. No nation threatens America. Yet it spends more on “defense” than the rest of the world combined.

To achieve unchallenged global dominance, perpetual wars are waged. Alleged missile defense weapons and tracking radar are for offense. Russia and China are targeted, not Iran or other Middle East countries.

Instead of abandoning Bush’s scheme, Obama plans more extensive, sophisticated, flexible, mobile systems to be developed through 2020. Doubling the number of Aegis class warships to 38 will be completed by 2015. They’ll be equipped with state-of-the art missile interceptors for offensive first-strike capability.

Russia’s justifiably furious. During the 1962 Cuban missile crisis, nuclear war was narrowly averted when cooler heads on both sides comprised.

Obama’s no Jack Kennedy. He’s an imperial tool, ravaging the world one country at a time and challenging Russia menacingly with encroachment.

Under Putin, Russia’s back, proud and re-assertive. It’s not about to roll over for America, especially in Eurasia. Washington’s gone back to the future with a new Cold War. This time it’s for much greater stakes and far larger threats to world peace.

In the 1930s, Roosevelt wanted war with Germany and Japan to end America’s Great Depression and achieve US global dominance. During today’s hard times, will Obama follow suit, no matter the potential catastrophe no legitimate leader would risk.

A possibility this frightening and real may be happening in real time as America lurches from one war to another and enacts police state laws quashing dissent.

Nonetheless, the Washington Post accuses Russia of Soviet era saber-rattling when it should be sounding the alarm.

Senior Contributing Editor Stephen Lendman lives in Chicago and can be reached at lendmanstephen@sbcglobal.net.

The New York Times and the privatization of Medicare