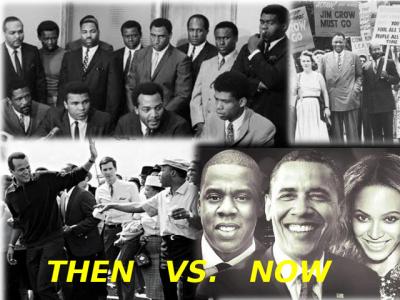 Black celebrities a generation ago like Muhammad Ali, Jim Brown, Curt Flood, Roberto Clemente, and of course, Harry Belafonte and his mentor Paul Robeson used their prominence not to hobnob with with the White House, but to help those picketing outside the mansions of governors and presidents, the imprisoned and oppressed. How far have we fallen since then? Now the same black celebs who wine and dine at the White House are mystifying “politics” while mouthing slogans of the far right…. 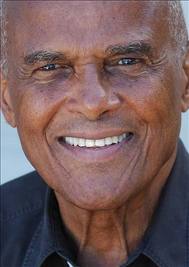 Back in August, [3] actor, singer and longtime humanitarian activist Harry Belafonte took Jay-Z, Beyonce and current black celebrities to task, declaring that they were selfish, lacking the vision of a better world or the will to help make it happen.

Beyonce’s staff of publicists were quick to reply with a list of tax deductible and officially approved charities that she funds. But to tell the truth, that kind of giving, the kind that often combines public charity, public relations and big tax advantages in roughly equal parts is pretty much an accounting and PR requirement for celebrity actors and athletes. It works like this — they’re going to pay taxes anyhow, at much higher rates than with so-called “investment income.” Divert that tax money into deductible charities, and it’s cash they would have paid out anyhow, but now it’s combined with photo opportunities and human interest stories showcasing their personal struggles and bolstering their brand, making them more money. That’s why her answer was no answer at all, it really proved what Belafonte said.

Beyonce and hubby Jay-Z are frequent guests at the White House. But Belafonte, and before him Paul Robeson went walking and talking among those organizing and demonstrating outside the White House, against big business, against the kind of established authority and privilege the Jay-Z’s and Beyonce’s of this generation are so delighted to be seen with. Dr. Martin Luther King was almost an outlaw, universally reviled and denounced throughout the corporate media the final year of his life, after he denounced the Vietnam war and linked the struggles against empire and economic injustice to that against racism. Harry Belafonte’s work with him, and Paul Robeson’s association with labor organizers and activists him didn’t carry tax advantages for either of them. They walked picket lines outside the courthouses and jails where activists were tried and imprisoned. They solicited their peers to fund strategy meetings, legal expenses for movement activists. Almost none of that was tax deductible, and much of it wasn’t public knowledge for years afterward.

That meant they did it out of selfless vision and love, and out of their own pockets, not to build their brands, lower their taxes or bolster their bank accounts. It cost Belafonte lots of money. It cost Muhammad Ali a year in prison. It cost Paul Robeson [4] his career. Look it up.

Back in the nineties somebody publicly told Michael Jordan that Nike paid him more than all its Vietnamese shoe factory workers put together. Michael said he’d “see about that” sometime soon but he and his publicists never mentioned it again. That was a long long decline from the unselfish humanitarian spirit of the Belefonte generation.

And the decline continues. Last week Jay-Z was asked at the opening of Barclays in New York about his own political aspirations. “I don’t even like the word politics, [5]” the rapper said. “It implies something underhanded. I think we need less government.”

This is a new low, perhaps two new lows.

First, Jay-Z cannot possibly be that stupid. The word politics does not imply anything. Politics are the processes fair and unfair, just and unjust that we humans use to conduct our collective affairs for the good or otherwise. When poor people mystify “politics” as something inscrutable and irrelevant to those who hunger and thirst for justice they indulge in escapism. When rich people do it they engage in misdirection.

Secondly, Jay-Z’s “we need less government” quip has long been a right wing staple, a codespeak slogan of the very rich and privileged who have in fact captured the government, but only object to “big government” when it benefits little people.

It’s proof positive that Harry Belafonte was right about Jay-Z and Beyonce. It’s time to look somewhere else for selfless visionaries among this generation’s celebrities.

For Black Agenda Radio I’m Bruce Dixon. Find us on the web at www.blackagendareport.com [6].

Bruce A. Dixon is managing editor at Black Agenda Report, a state committee member of the GA Green Party, and a partner in a technology firm. He lives and works in Marietta GA, and can be reached at bruce.dixon(at)blackagendareport.com, or via this state’s contact page.

Yup. He’s an asshole, a corporate lickspittle extracting his fortune from the poorest of his “race” and the middle class white dupes seeking street “cred.” Like Russell Simmons with his crappy overpriced debit cards and Magic Johnson’s Rent-a-Center and tax rebate loan scams they’re a blight on the black planet.