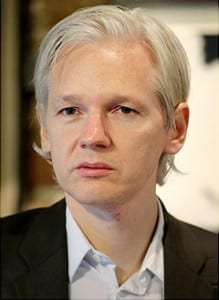 I had an opportunity to interview WikiLeaks founder Julian Assange at the Ecuadorian Embassy in London, where he has been granted political asylum since June 2012. Assange is wanted for questioning in Sweden over sex allegations, although he has never been charged. Assange believes that if sent to Sweden, he would be put into prison and then sent to the United States, where he is already being investigated for espionage for publishing hundreds of thousands of classified diplomatic and military memos on the WikiLeaks website.

George W. Bush’s new presidential library at Southern Methodist University in Texas has opened with great fanfare, including the attendance of President Obama and former presidents Carter, Bush Sr. and Clinton. George Bush has said that the library is “a place to lay out facts.” What facts would you like to see displayed at his library?

A good place to start would be laying out the number of deaths caused by the invasions of Iraq and Afghanistan. At Wikileaks, we documented that from 2004-2009, the U.S. had records of over 100,000 individual deaths of Iraqis due to violence unleashed by that invasion, roughly 80 percent of them civilians. These are the recorded deaths, but many more died. And in Afghanistan, the U.S. recorded about 20,000 deaths from 2004-2010. These would be good facts to include in the presidential library.

Many people worked hard during the Bush years to protest the wars, but the Bush administration refused to listen. It was very demoralizing for people to think that their efforts were for naught.

They should not be demoralized. I believe that the opposition to the Iraq war was very important, and that it actually altered the behavior of U.S. forces during the initial invasion of Iraq. Compare it to the 1991 Gulf War, when massive numbers of Iraqis, both soldiers and civilians, were killed. In the 2003 invasion there was a lot more concern about casualties. The protests rattled their cage.

[pullquote]     Medea and Julian seem eerily patient with Amnesty International and Human Rights Watch, both organizations that are now completely integrated with the global propaganda apparatus maintained by the empire. At the end of the day the question is, why do radicals like Medea and Julian even consider the hope of having treacherous mainstream liberals come to their aid? —Eds   [/pullquote]

We released a memo that showed that if the prospective military operation might kill over 30 people, it had to be approved all the way up the chain of command. So while the protests did not stop the war, they did have an impact on the way the war was initially conducted, and that’s important.

While George Bush is feted in Dallas, Bradley Manning languishes in jail. His trial will begin on June 2. Bradley already pleaded guilty in February to ten charges, including possessing classified information and transferring it to an unauthorized person. Those pleas alone could subject him to 20 years in prison. On top of that, the government has added espionage charges that could put him in prison for life.

What do you think the trial will be like?

It will be a show trial where the government tries to prove that by leaking the documents, Bradley “aided and abetted the enemy” or “communicated with the enemy.” The government will bring in a member of the Navy Seal team that killed bin Laden to say that he found some of the leaked information in bin Laden’s house.

The government doesn’t even claim that Bradley passed information directly to “the enemy” or that he had any intent to do so. But they are nonetheless making the absurd claim that merely informing the public about classified government activities makes someone a traitor because it “indirectly informs the enemy.”

With that reasoning, since bin Laden recommended that Americans read Bob Woodward book Obama’s War, should Woodward be charged with communicating with the enemy? Should the New York Times be accused of aiding the enemy if bin Laden possessed a copy of the newspaper that included the WikiLeaks material?

What are some things that Bradley Manning supporters can do to help?

They should pressure the media to speak out against the espionage charges. The Los Angeles Times put out a good editorial but other newspapers have been poor. A Wall Street Journal column by Gordon Crovitz said that Bradley should be tried for espionage, and that I should be charged with that as well because I’m a “self-proclaimed enemy of the state.”

If Manning is charged with espionage, this criminalizes national security reporting. Any leak of classified information to any media organization could be interpreted as an act of treason. People need to convince the media that it is clearly in their self-interest to take a principled stand.

What are other ways people can help Bradley Manning’s case?

People could put pressure on Amnesty International and Human Rights Watch. These groups briefly protested the horrible conditions under which Bradley was detained when he was held in Quantico, but not the fact that he’s being charged with crimes that could put him in prison for life.

To name someone a political prisoner means that the case is political in nature. It can be that the prisoner committed a political act or was politically motivated or there was a politization of the legal investigation or the trial.

Any one of these is sufficient, according to Amnesty’s own definition, to name someone a political prisoner. But Bradley Manning’s case fulfills all of these criteria. Despite this, Amnesty International has said that it’s not going to make a decision until after the sentence. But what good is that?

What is Amnesty’s rationale for waiting?

Their excuse is that they don’t know what might come out in the trial and they want to be sure that Bradley released the information in a “responsible manner.”

I find their position grotesque. Bradley Manning is the most famous political prisoner the United States has. He has been detained without trial for over 1,000 days. Not even the U.S. government denies his alleged acts were political.

Human Rights Watch doesn’t refer to Bradley Manning as a political prisoner either. These groups should be pushed by the public to change their stand. And they should be boycotted if they continue to shirk acting in their own backyard.

Another way for people to support Bradley Manning is to attend his trial in Ft. Meade, Maryland, which begins on June 2, and the rally on June 1. They can learn more by contacting the Bradley Manning Support Network.

Thank you for your time, Julian.

Medea Benjamin is cofounder of www.codepink.org and www.globalexchange.org, and author of Drone Warfare: Killing by Remote Control. She interviewed Assange on April 18, 2013. For more information about Assange’s case, see http://justice4assange.com/extraditing-assange.html.Follow Medea Benjamin on Twitter: www.twitter.com/@medeabenjamin

The Fall of Libya: A Study in Hypocrisy

Margaret Kimberley interviewed by David Swanson: “All US...