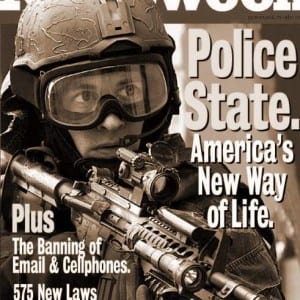 Information continues to come to light raising questions about the relationship between American intelligence agencies and the Tsarnaev brothers, who are suspected of carrying out the April 15 bombing at the Boston marathon.

The brothers’ parents continue to insist that their sons are innocent, with the mother claiming they were set up by the American state and “controlled” by the FBI.

US authorities have acknowledged that the Tsarnaev brothers were investigated by the FBI and CIA. However, they claim that at most the intelligence and security agencies are guilty of a “failure to communicate” what they knew about the two.

This is an echo of the “failure to connect the dots” explanation that was given for the failure of the CIA and FBI to prevent the 9/11 attacks, even though many of the perpetrators were known to these agencies and were being tracked. Despite the staggering security lapses that were acknowledged in the aftermath of 9/11, no high-level officials were fired. Robert Mueller, who headed the FBI in 2001, remains the head of the top federal police agency.

Details continue to emerge over the close surveillance by state intelligence agencies of the Tsarnaevs and their associates. In March 2011, the Russian federal security services (FSB) intercepted a call between Tamerlan Tsarnaev, the older of the two brothers, and his mother, in which they “vaguely discussed jihad.”

In another wiretapped conversation, Tsarnaev’s mother spoke with someone in the Caucasus who is under FBI investigation, although the reasons for the investigation have not been revealed.

According to news reports, the recorded calls were one of the things that prompted the Kremlin to alert the FBI to the Tsarnaevs in 2011, and then contact the CIA about them later in the year, after the FBI dropped its investigation. The FBI claims that the Russian government did not say at the time why it was issuing these warnings and did not share the content of the wiretapped conversations.

The manner in which these issues are being handled testifies to the breakdown of democratic processes in the United States. None of these questions is being seriously investigated in the media or made the subject of public congressional hearings. Instead, the Boston bombings are being seized upon to argue for boosting the authority and power of the intelligence agencies.

As the events in Boston graphically demonstrated, this will only facilitate plans already well advanced for the imposition of dictatorial forms of rule. The Boston Marathon bombing was seized upon as the pretext for placing the entire city of Boston and a number of its suburbs under a police-military lockdown and carrying out house-to-house warrantless searches.

The American mass media have ignored an April 24 report in the Russian newspaper Izvestia that it is in possession of documents from the Georgian Interior Ministry revealing that Tamerlan Tsarnaev attended a workshop in Georgia in the summer of 2012 sponsored by an organization called the Caucasus Fund, whose purpose was to recruit operatives in the northern Caucasus.

Based on statements by Colonel Grigoriy Chanturiya, a Georgian counterintelligence specialist, Izvestia claims that the Caucasus Fund was founded in 2008, after the Russo-Georgian war, in order to develop intelligence assets in southern Russia. According to Chanturiya’s report, the Caucasus Fund had a monthly budget of about $22,000 and had spent approximately $2.7 million since it began operations.

In 2008, Russia and the US nearly went to war in the Caucasus, when the US-backed Georgian government attacked the Russian-controlled breakaway region of South Ossetia. Although the White House backed away from a full-scale military confrontation with the Kremlin, it had advance knowledge of the Georgian attack on Russian forces and did not stop it. Secretary of State Condoleezza Rice had visited the country one month prior to the attack.

According to Izvestia, the Caucasus Fund was shut down in late 2012 over concerns that it had attracted the attention of the Russian secret services. The former vice president of the organization told the newspaper that since January of this year it had ceased operating almost entirely. He did not say why.

The Caucasus Fund allegedly worked with the regime in Tbilisi and the Jamestown Foundation, a US think tank headed by a number of senior figures from the US political and military establishment, including former National Security Advisor Zbigniew Brzezinski.

The Georgian Interior Ministry has denied Izvestia ’s allegations, insisting that Tsarnaev never set foot in Georgia and that no one named Grigoriy Chanturiya works for the ministry.

However, the Caucasus Fund has acknowledged holding a joint conference with the Jamestown Foundation in 2011. It wrote in an April 24 statement that it aims to “establish and develop scientific, cultural, and humanitarian relations between the peoples of the South and North Caucasus.”

The northern Caucasus is a restive region in southern Russia, bordering the ex-Soviet republics of Georgia and Azerbaijan in the southern Caucasus. It includes the republic of Chechnya, where a separatist movement has been active since the collapse of the Soviet Union and against which Moscow has waged two bloody wars. Chechen separatism has become increasingly intertwined with a burgeoning Islamic extremist movement in the Muslim-majority region.

Powerful sections of the American ruling class have long given support to Chechen separatism. The American Committee for Peace in the Caucasus (ACPC), sponsored by the right-wing organization Freedom House, has led such efforts for many years. A 2004 article in the British Guardian newspaper entitled “The Chechens’ American Friends” noted that ACPC portrayed Chechen separatism as a “fashionable ‘Muslim’ cause,” deserving and requiring US support.

The director of programs in the Caucasus for the Jamestown Foundation formerly worked for Freedom House.

In the US media, the Izvestia report has been mentioned only by a few foreign policy publications, which have dismissed it as a “conspiracy theory.”

In fact, the close ties between the US foreign policy establishment and Chechen Islamist forces form a critical part of the background to the Boston bombings. By suppressing such information the media are denying to the public key information regarding not only the identity of possible forces involved in the bombing, but also the reactionary implications of Washington’s ongoing collaboration with Islamist terrorist forces in the Middle East.

The US is working in alliance with Muslim extremists in Syria, who function as Washington’s proxy force in the war to topple Syrian President Bashar al-Assad. In this war, Chechen Islamists play a major role. The Muhajireen Brigade of foreign Islamists fighting as part of the Syrian opposition is led by an ethnic Chechen, Abu Omar al-Shishani, and reportedly includes many other Chechens.

Before his death last October, the Chechen Abu Bara was a brigade commander in the Al-Nusra Front, the Al Qaeda-affiliated group that is playing the dominant military role in the US proxy war against Assad.

The US government has a long tradition of cultivating ties with such reactionary forces. It played a central role in fomenting radical Islamism in Afghanistan before and during the Soviet-Afghan war of the 1980s, in an effort to undermine Soviet influence in the region. The emergence of Osama bin Laden and Al Qaeda, which evolved out of the organization that oversaw logistical support to the Islamist anti-Soviet fighters, was the direct product of this war.

The US intelligence community is so familiar with the consequences of losing control of its former assets that it has coined a term for it: blowback. However, the media have avoided raising any possibility that the Boston bombings might be an example of blowback, or an operation carried out with the tacit support or assistance of forces within the state.