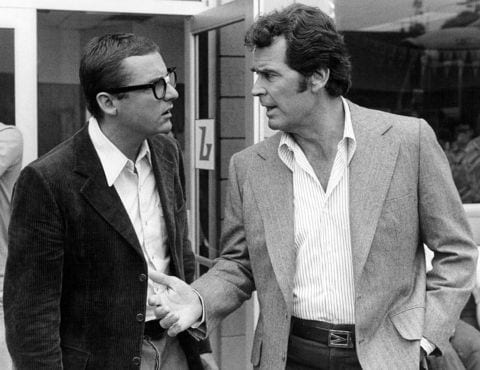 [A]merican actor James Garner died at his home in California July 19 at the age of 86. Over the course of nearly five decades, and for the benefit of several generations, Garner represented something generous, affable and skeptical of authority in film and television.

Garner was born in Norman, Oklahoma, the son of a carpet layer. His mother died when he was five years old, and his father eventually moved to California. His son joined him there after briefly serving in the US Merchant Marine in World War II.

More significantly, the future actor served 14 months in the US army during the Korean War (1950-53). That bitter conflict, occurring only five years after the end of World War II and at the height of the anti-communist hysteria in the US, resulted in the deaths of more than one million combatants, including tens of thousands of Americans, and several million Korean civilians.

While many American soldiers went off to World War II in the conviction that Hitler represented a danger to the US and the world, the Korean War was a far different affair. Whatever US troops understood about the reality or non-reality of the threat of “Godless Communism,” the cynicism and brutality of American imperialism’s assault, above all, on the Chinese Revolution, engendered a dark and suspicious mood within a considerable layer of those who fought in Korea.

That mood also found response in numerous problematic, self-questioning films depicting the war, including The Steel Helmet (Samuel Fuller, 1951), One Minute to Zero (Tay Garnett, 1952), The Bridges at Toko-Ri (Mark Robson, 1954), Men in War (Anthony Mann, 1957), Pork Chop Hill (Lewis Milestone, 1959) and others. One critic notes a “psychological dishevelment and profound cynicism [that] marks a changed sense of war.”

While the various obituaries of Garner make reference to his two Purple Heart decorations, none cites the actor’s own description of his Korean War experience, recorded in his autobiography, The Garner Files: A Memoir (2011), written with Jon Winokur.

Garner recounts one of the episodes for which he was decorated, which sounds a little like a scene from one of the sardonic, bleakly comic anti-war films of the next decade: “The Red Chinese shot us to pieces. Before we knew it, we had only thirty men left out of our one hundred thirty, and we were surrounded.” To top it all off, the next day, the remnants of Garner’s unit were strafed accidentally by US Navy fighter jets “firing 20-millimeter white phosphorus rockets. I was diving into a foxhole when I got hit. In the butt. … The jets kept firing and there was white phosphorus streaming in all directions, so I figured I’d better get out of there. I jumped out of the foxhole and ran … right off the side of a cliff.”

Garner ends the section of his memoir devoted to the Korean War by noting that “Charlie Madison, my character in The Americanization of Emily, may have been right: we’ll end wars only when we stop glorifying those who take part in them. In any case, I want to be very clear about one thing: I was not a hero. … I didn’t save anybody but myself. I wasn’t a hero; I just got in the way a lot.”

This dubious, “unheroic” attitude, which spoke to a wider mood in the US population at large in the 1950s, became Garner’s trademark, although it never took a sour, misanthropic form. His characters’ relatively cheerful skepticism, often expressed in reaction to one absurdity or another, tended to be directed against the powers that be or their official claims and morés.

Garner burst into prominence in Maverick, the Warner Bros. comedy Western that had its debut in September 1957. He played Bret Maverick, a well-dressed gambler and cardsharp, who preferred to talk his way out of tight spots and who only cheated those who deserved it. Midway through the first season, Garner was joined by Jack Kelly as brother Bart Maverick. The pair, with a considerable chemistry between them, alternated leads from week to week, occasionally teaming up in a single episode. Significantly, the first three episodes of Maverick were directed by Budd Boetticher, the talented film director best known for his Westerns with Randolph Scott.

Maverick ’s irreverence struck a chord with audiences, competing with and sometimes reaching larger audiences than its time-slot rivals, the Ed Sullivan and Steve Allen Shows. The series made Garner a household name.

To a certain extent, he was less fortunate in his film roles. This was not Garner’s fault, but a function of the overall decline in Hollywood filmmaking, at least in certain genres, in the wake of the anti-communist purges of the early 1950s and its general conformism and prudery.

He was fortunate, however, to perform alongside Marlon Brando in one of his first efforts, the not very successful Sayonara (1957). Garner notes that Brando was rightfully very critical of director Joshua Logan. In fact, Brando became Garner’s “personal coach. We’d go out to a rice paddy and ‘improve’ the scenes. Then the two of us would rehearse and rehearse.” He later comments, “Marlon Brando was the best movie actor we’ve ever had. I know that’s not exactly going out on a limb, but I just want to be on record with all the other actors who feel the same way.”

Garner is scathing about studio boss Jack Warner, who “treated everybody the same: lousy. He didn’t spare his wife, his son, or his mistress. He hated writers …, he hated actors and he was cruel to his employees.”

Among the more or less interesting films that Garner appeared in during the early years of his career were Darby’s Rangers (William Wellman, 1958), a World War II film; Cash McCall (Joseph Pevney, 1960), in which Garner plays a corporate raider who has an unconvincing change of heart; The Children’s Hour (William Wyler, 1961), about two teachers accused of being lesbians; andThe Great Escape (John Sturges, 1963), another Second World War film, with Steve McQueen and a host of others.

The aforementioned The Americanization of Emily, one of Garner’s favorite films, directed by Arthur Hiller from the script by Paddy Chayefsky, is a World War II comedy-drama. Garner’s Charlie Madison is a self-serving adjutant for a US rear admiral and a self-proclaimed coward. Things get complicated when he falls for an Englishwoman (Julie Andrews) who has lost her husband, brother and father in the war. Like most of liberal iconoclast Chayefsky’s scenarios, this one avoids the most difficult issues, but the film is complicated enough to be interesting.

Garner was fortunate to act with a number of the most intriguing leading actresses of the time, including Lee Remick, Debbie Reynolds, Angie Dickinson and Kim Novak. The studios also briefly attempted to turn Garner into a second Rock Hudson, teaming him with Doris Day in Norman Jewison’sThe Thrill of It All (1963, written by Carl Reiner) and Michael Gordon’s Move Over, Darling (1963, a remake of Garson Kanin’s My Favorite Wife, 1940, with Cary Grant and Irene Dunne).

Garner continued featuring in Westerns, including the “spaghetti Western” A Man Called Sledge (Vic Morrow, Giorgio Gentili, 1970), until that genre more or less exhausted itself. He featured in a short-lived Vietnam War-era series,Nichols (1971-72), as a sheriff who rode a motorcycle instead of a horse. Margot Kidder, as a barmaid, played his love interest. The actor was a lifelong liberal, “a ‘bleeding-heart liberal,’ one of those card-carrying Democrats that Rush Limbaugh thinks is a communist,” he writes in his memoir. A strong supporter of civil rights, Garner participated in the mammoth March on Washington in August 1963 at which Martin Luther King, Jr. delivered his famed “I Have a Dream” speech. Garner writes: “I was there for a reason: I didn’t think it was right that a hundred years after President Lincoln signed the Emancipation Proclamation, African Americans still didn’t have basic rights of citizenship.”

Garner, at the height of his fame, was a member of the celebrity delegation that attended the March, which also included Brando, Sidney Poitier, Burt Lancaster, Paul Newman, Harry Belafonte, Ossie Davis, Ruby Dee, Blake Edwards, Rita Moreno, Lena Horne, Diahann Carroll, Sam Peckinpah, Sammy Davis Jr., Anthony Franciosa and Tony Curtis. He proudly recalls sitting in the third row, “standing before the columns of the Lincoln Memorial,” as King made his speech.

In The Rockford Files, Garner played private investigator Jim Rockford. (He had starred in Marlowe [Paul Bogart], as the iconic Philip Marlowe, Raymond Chandler’s fictional private detective, in a version of Chandler’s The Little Sister, in 1969.) Rockford has served time in San Quentin Prison (for a crime he didn’t commit), is not a financial success and lives in a mobile home on a parking lot. The show benefited from a number of character actor regulars, including Noah Berry, Jr., Stuart Margolin and Joe Santos. Like Maverick, Rockford preferred to navigate tense situations without violence. The series was popular, again based largely on Garner’s quick-wittedness and empathy.

More memorable films in the latter phase of his career include Blake Edwards’Victor Victoria (1982), in which Garner is a quasi-gangster in love with a woman pretending to be a male “female impersonator” (Julie Andrews); Martin Ritt’s Murphy’s Romance (1985), with Sally Field; and Barbarians at the Gate(1993), about corporate predation and the leveraged buyout of RJR Nabisco. He appeared in his final television series, 8 Simple Rules, in 2005. Garner continued doing voiceover work until 2010.

The actor’s genuine charm and sincerity will be missed.

What are the politics of the crash of Malaysian Airlines flight MH17?