Home ABOMINATIONS Ferguson Worked as Intended: For the Maintenance of the Doctrine of White Supremacy in the US

Ferguson Worked as Intended: For the Maintenance of the Doctrine of White Supremacy in the US 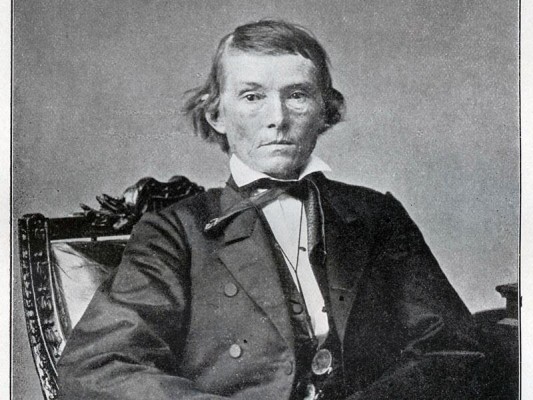 Stephens: “Our system commits no such violation of nature’s law. With us, all of the white race, however high or low, rich or poor, are equal in the eye of the law. Not so with the Negro. Subordination is his place.”

[dropcap]T[/dropcap]he doctrine of white supremacy was invented in 17th century North America to justify the use and practice of slavery in the British colonies (and at the time not just limited to the south of what became the United States, but in all of them).  Just before the First US Civil War, the doctrine was well-summarized by Alexander Stephens, a Southern Unionist who later became Vice-President of the Confederate States of America under the arch-secessionist Jefferson Davis.

“Many governments have been founded upon the principle of the subordination and serfdom of certain classes of the same race. Such were, and are in violation of the laws of nature. Our system commits no such violation of nature’s law. With us, all of the white race, however high or low, rich or poor, are equal in the eye of the law. Not so with the Negro. Subordination is his place. He, by nature, or by the curse against Cain, is fitted for that condition which he occupies in our system. Our new government is founded on the opposite idea of the equality of the races. Its foundations are laid, its cornerstone rests upon the great truth, that the Negro is not equal to the White man; that slavery — subordination to the superior race — is his natural condition.”

As I wrote in a column published in 2009, as it started the First Civil War in support of secession, the South had six principal war aims:

Except that the institution of chattel slavery does not exist, the South achieved all of its war aims, some of them beyond the wildest dreams of any of its leaders.  While for the most part that victory is pretty-well self-evident, I have detailed how they did that in, among other places, the column cited above and in my book The 15% Solution.  Perhaps most importantly, the Doctrine of White Supremacy dominates the thinking of much of the white US, both consciously and unconsciously.

Although these days Hollywood and most of academia and the political class is almost uniformly “PC” in its treatment of minorities, such was not the case for a long time, and the damage was immense in perpetuating (by glamorizing and justifying) old hatreds and prejudices. Below, a brief sampler. 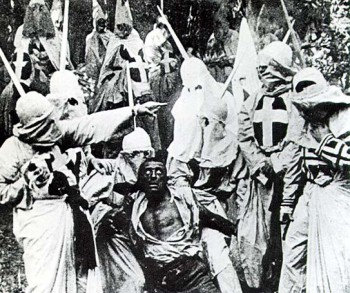 In D.W. Griffith’s famed Birth of a Nation, Hooded Klansmen catch Gus, a black man described in the film as “a renegade, a product of the vicious doctrines spread by the carpetbaggers.” Gus was portrayed in blackface by white actor Walter Long.  The KKK was, of course, the righteous avengers. 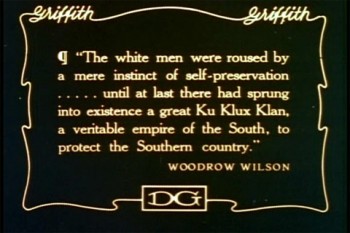 Above a quote from none other than the normally revered Woodrow Wilson, used by Griffith in his film.  Three decades later, Hollywood again shed tears for the plantocracy way of life in Margaret Mitchell’s elegy for the South, Gone with the Wind. 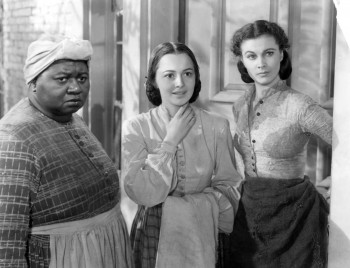 Hattie McDaniel, Olivia de Havilland and Vivien Leigh, the indomitable Scarlett O’Hara, In Gone With the Wind. The Southern way was romanticized as a genteel civilization unjustly trashed by the coarse, brutish and mercantilistic North. What made Jewish tycoons in Hollywood want to whitewash the South? That question is yet to be answered. 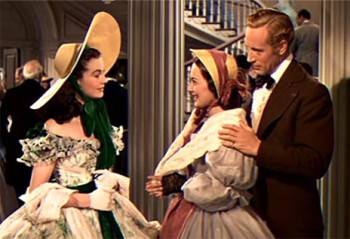 Then, what immediately followed the end of the First Civil War in the South was, on the economic side, the assurance of the perpetuation of a living situation for the freed slaves that in many ways mimicked slavery, that is share-cropping (“40 acres and a mule” died under the veto pen of the Southern successor to President Lincoln, Andrew Johnson).  On the political side, the first objective of the formation of the original Ku Klux Klan was to deny the freed slaves the vote, which was fully accomplished following the withdrawal of the Union Army occupiers in 1877.  This system, along with social and commercial segregation, “Jim Crow,” stayed in place until the passage of the Voting Rights Act in 1965.  With the recent Supreme Court decision voiding a key section of that Act as it applied to the South, along with the Republican national voter suppression campaign,  African-American, as well as Latino, voting is being once again repressed, both by making it physically more difficult as well as by the imposition of a version of the poll tax: the acquisition, with no taxpayer support, of the “Voter ID.”  And etc., etc., etc. (I will leave the discussion of whether voting accomplishes anything in this nation to other editors on this blog.)

And so, you might be saying at this point, what this all has to do with the killing of Michael Brown, black, by the police officer Darren Wilson, white.  It has everything to do with it.  An unusual event?  No, of course not.  For example, in the month between July 17 and August 17, 2014, 60 persons were killed by police officers, almost all of them black or Latino virtually none of them involved in committing a potentially fatal offense.  As The World Can’t Wait put it: “the murder of Black and Brown youth by the state goes on like clockwork.”

There is a reason for this state of affairs and it is not just that some white cops are racists and truly regard blacks and Latinos as second-class or non-citizens, with no rights.   It is not just because a district attorney decides on his own that he is not going to play prosecutor in this particular case, but rather defense attorney for the accused, which he can do until the cows come home in the absence of any means of cross-examination either of the accused or his witness supporters (one of whom made her own racism abundantly clear in her personal journal.  Furthermore, there was no attorney to stand in on the true prosecutorial side to challenge, before a judge, what the mis-named “prosecutor” was actually doing in defending, not prosecuting.

Oh yes, and as for why District Attorney Robert McCulloch chose to make his announcement of the Grand Jury’s decision in prime time rather than around the time when it was reached, about 2PM in the afternoon?  Well, he did just win re-election, so that’s not it.  No.  This man was addressing all white US who think the way that he does, and all the white law enforcement personnel across the US who don’t want to have to worry too much should they just happen to kill an African-American or Latino in the course of duty.  McCulloch, who would likely deny vigorously that he consciously thinks in this way at all, it being so ingrained in the thought-processes of so many US, is, along with the modern Republican Party in the Congress, the Supreme Court and many state and local governments sending out a clear message: White supremacy lives.  And so, not to worry.

For many US, white supremacy is the doctrine that governs their lives.  They, sub-consciously for the most part, need to feel secure in that thinking.  And they need to feel that US “law enforcement” is doing its part to provide them with that security.  I am not talking about feeling secure in their physical surroundings, for given how highly segregated US society is, that is not too often an issue.  I am talking about what goes on inside their heads.  And so Michael Brown is killed, and the killing will not stop.  Actually, in terms of the number of deaths, police killings of black and Latinos make lynching in the Old South (which was not always of blacks, mind you), except in the early days of the practice, look like much ado about not too much.  Marches, demonstrations, police lapel cameras (“oh dear, in the heat of the moment mine fell off”), civilian review boards, and etc. are not going to change the reality in the US, still submerged under the victory of the South in the First Civil War and what it accomplished.  Only the Second Civil War, which is coming, may be able to change that.

It should be noted that the United States is the only advanced capitalist country in which the political economy is dominated by such a doctrine as that of White Supremacy, and its use by, over time, one party or the other for political purposes.  The only other country in which the political use of a doctrine of bigotry, prejudice, and racial superiority focused on a particular social grouping within the society came to so dominate its political economy, combined with an imperialistic foreign policy, was of course Nazi Germany.  And we all know to where that led.

Steven Jonas, MD, MPH is a Professor Emeritus of Preventive Medicine at Stony Brook University (NY) and author/co-author/editor/co-editor of over 30 books. In addition to being a columnist for BuzzFlash@Truthout he is the Editorial Director of and a Contributing Author to The Political Junkies for Progressive Democracy (http://thepoliticaljunkies.org/), and a Senior Editor, Politics, for The Greanville Post, (https://www.greanvillepost.com/).  Dr. Jonas’ latest book is The 15% Solution: How the Republican Religious Right Took Control of the U.S., 1981-2022: A futuristic Novel, Brewster, NY, Trepper & Katz Impact Books, Punto Press Publishing, 2013, http://www.puntopress.com/jonas-the-15-solution-hits-main-distribution/, and available on Amazon.