Always beware of the insidious media

Start by asking: Who do these people represent? Who pays their salaries? Who do they depend on for their careers? Accepting information without thinking is like taking medicines without looking at the labels. 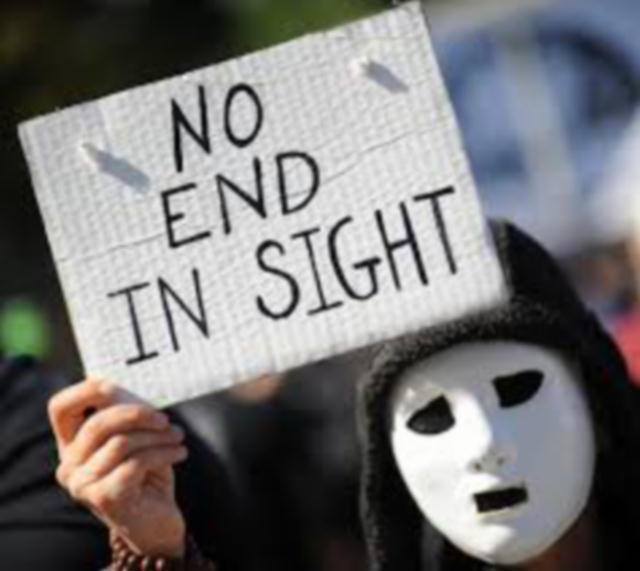 [dropcap]We’ve noticed a change[/dropcap] in the tenor of corporate news reporting concerning the current civil rights protests about police killings, moving toward discrediting protesters, as corporate media so often do when protest becomes prolonged.

We don’t have to go to the “conservative” media to find it, this morning the liberal Huffington Post described last night’s protests in the San Francisco Bay area thusly:

“The crowds that came out to protest in Berkeley numbered only a few hundred, but some are not college students or residents so much as full-time demonstrators who protest anything — war, prison conditions and economic inequality — and sometimes use demonstrations as a pretext for violence and vandalism, just as they did during the Occupy Wall Street movement.”

Note must be made the report was filed by two AP writers, KRISTIN J. BENDER and PAUL ELIAS.

They make free use of tendentious quotes (to be expected) by police, the mayor and other establishment figures. As usual, much is made of the looting, an attempt to stain the protests as riddled with shiftless, opportunistic criminals. The anarchists, naturally, are also invoked with the same purpose. Not wanting to miss an opportunity to badmouth anti-establishment voices, the article also retroactively cast aspersions on the government-infiltrated and destroyed Occupy movement. Further, showing its true hand, it whines that many of the protesters are people who “protest anything”—from “prison conditions to war to economic inequality”—as if these abominations were not totally worthy of muscular and persistent protests.
—The Editors

See the whole report in our Appendix.

Huffpo did not explain how “full time” protesters would eat or take care of other basic needs. We also note the continued attack on the nonviolent and peaceful Occupy Movement. They’re doing it again, the demonstrations must be biting into establishment nerves.

Huffpo and other corporate media will never reveal that the real “full time protesters” work at the American Enterprise Institute, Heritage Foundation, Hoover Institution, CATO Institute and other establishment think tanks that work around the clock to come up with the propaganda lines mainstream media push to keep the masses dazed and confused.

Jack Blakwill is a senior member and editor of LUVNews.

BERKELEY, Calif. (AP) — Protests in New York and Missouri have died down, but angry crowds in one California city famous for activism spent much of the weekend blocking traffic and clashing with police in this ultra-liberal bastion thousands of miles from the where Michael Brown and Eric Garner were killed.

Although many activists in other parts of the country have gone home, protests in Berkeley and Oakland are still active, reflecting the area’s long history of protest dating back to the 1960s.

The crowds that came out to protest in Berkeley numbered only a few hundred, but some are not college students or residents so much as full-time demonstrators who protest anything — war, prison conditions and economic inequality — and sometimes use demonstrations as a pretext for violence and vandalism, just as they did during the Occupy Wall Street movement.

“The people in the Bay Area are sensitive to worldwide issues,” Bates said. “Unfortunately, there is a small element that uses violence at times to make their point.”

Merchants on Monday cleaned up broken glass and took stock of the previous night’s looting from downtown Berkeley stores.

Bates called the violent elements of the demonstration “cowards and thugs who need to take off their masks.”

It was not immediately known how many businesses were damaged, and no damage estimate was offered. Five people were arrested, police said.

Stuart Geiger, 27, a UC Berkeley doctoral student, attended the protest and recorded video of peaceful demonstrators attempting to stop the looting of a Radio Shack.

“There was a pretty vocal sentiment there about keep this a peaceful protest and stay on message,” Geiger said.

Another peaceful protester was struck by a hammer and slightly injured when he tried to stop looting.

In keeping with the city’s protest history, Berkeley leaders have put limits on their police. Officers cannot have search dogs, stun guns or helicopters and are restricted in the type of gear they can wear, said Berkeley police union President Sgt. Chris Stines.

“All of us are out there wearing what we wear on patrol, and as a result, we are getting pretty banged up,” he said, explaining that shin and chest guards and padded vests would help prevent injuries. At least three officers suffered minor injuries.

Stines said he did not believe there was any “legitimate political message” behind Sunday’s protest. “It was just criminal behavior.”

The unrest is not limited to Berkeley.

Seattle police arrested seven people Saturday during a protest that included a group trying to block a state highway. Rocks were also thrown at officers and storefronts smashed. More protests were scheduled for Monday.

The protests started after a Nov. 24 decision by the grand jury not to indict officer Darren Wilson in the killing of Michael Brown. A New York grand jury on Dec. 3 declined to prosecute a police officer captured on video applying a fatal chokehold on Eric Garner. That decision set off another series of demonstrations nationwide.

Oakland police have arrested about 200 people since the protests started.

“There is an anarchist fringe of about 100 to 200 people who live in the area” who are responsible for the violence, Oakland Mayor Jean Quan said. Quan said the group thrives on media attention, obscuring the message of peaceful protesters.

The Rev. Jesse Jackson said much of the violence can be attributed to an “organized element” of activists based on the east side of the San Francisco Bay who seek attention with rocks and bottles. He said he’s disappointed that the violence obscures the efforts of the peaceful demonstrators.

Other issues such as University of California tuition hikes and general dissatisfaction with gender, race and economic inequality appear to be driving the Berkeley protests, he said.

Sunday’s protest began peacefully on the University of California’s Berkeley campus but grew rowdy and spilled into neighboring Oakland. Activists forced their way onto a freeway and blocked traffic, but officers chased them off, police said.

California Highway Patrol officers fired tear gas after protesters threw rocks and bottles at them and tried to light a patrol car on fire. Police also said explosives were thrown at officers, but it was unclear how potent the explosives were.

There also were reports of vandalism at Berkeley City Hall. A Whole Foods grocery on historic Telegraph Avenue was looted, with people stealing bottles of champagne and passing them around the crowd.

Associated Press writers Lisa Leff in Berkeley and Chris Grygiel in Seattle contributed to this report.