Home AMERICAN EXCEPTIONALISM Why the U.S. Press is Afraid of Marx (and Jeremy Corbyn)

Why the U.S. Press is Afraid of Marx (and Jeremy Corbyn) 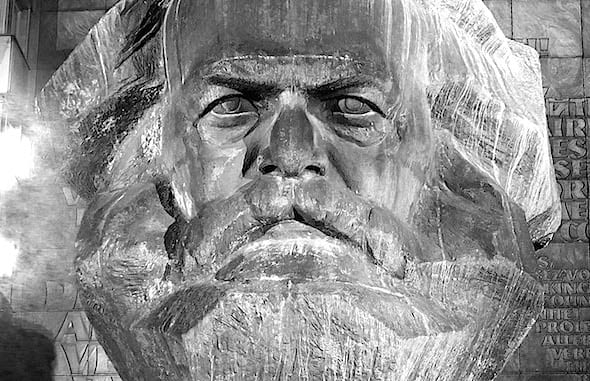 The Cold War paranoia of socialism seems to have just made a comeback. After the election of Democratic Socialist Jeremy Corbyn to the leadership of the UK labor party on Saturday, the American press went, to put it crudely, completely batshit crazy.

Over at The Daily Beast, for example, the normally rational Maajid Nawaz turned apoplectic in his article “The Daily Hate: Corbyn, Trump And the New Politics of Spite.”  He opens with a knock at all populist politicians and the angry and hateful masses: “Peddling hate makes for popular politicians, and being angry is the new “being cool” (is being angry at, say, inequality really such a bad thing?). While he lumps Corbyn and Trump together as hate-peddlers, he does not provide one single example of Corbyn doing so during his campaign over the past few months, which may be because he hasn’t.

But “hate peddling” isn’t what the American media is really upset about. Indeed, the fact that Corbyn is an “admirer of Karl Marx” is what has particularly irked editors and reporters — or maybe “shocked” is the better word. Various outlets, including NBC News and Yahoo News, republished a Reuters story with the tabloid headline: “Karl Marx Admirer Jeremy Corbyn Voted as Britain’s Labour Party Leader.”

Ouch. What better insult is there than to call someone an admirer of the 19th century critic of capitalism? Of course, when the great majority of Americans see a headline like this, something like “admirer of Joseph Stalin” comes to mind, rather than admirer of one of the great intellectuals of the 19th century — something that no objective observer can deny. To most Americans, after a half century of Cold War fear, Karl Marx was the Soviet Union and the Soviet Union was Karl Marx. The fact that Marx was one of the most dedicated advocates of democracy, and that his diagnosis of capitalism remains widely relevant today, is not something that comes up often.

Indeed, Marx’s most important work, “Capital” (Vol.1-3), does not discuss socialism or communism, but capitalism. It is understandably not as popular as his forty page pamphlet “The Communist Manifesto,” written in very readable prose with Friedrich Engels, but it is much more important. The first Volume of Capital alone is over one thousand pages of rather dense economic theory — not something that most would consider beach reading material. As the Anthropologist David Harvey says in his lecture on Vol.1, most readers give up during the first few chapters.

When looking at Marx’s main diagnosis, however, it is apparent that his analysis of capitalism remains very important to this day, which may be why Democratic Socialist like Corbyn and Sanders are gaining so much support. In Marx’s analysis, widespread inequality and economic instability (and to a lesser degree environmental degradation) are inherent in the capitalist system, and they will eventually result in its collapse. It should be recalled, by the way, that Marx studied capitalism in London around the same time that Charles Dickens was writing of the dreadful social conditions in industrialized Britain. Factory workers, or the proletariat, worked and lived in horrible circumstances, while certain wealthy industrialists accumulated more wealth than anyone had ever thought possible. Across the Atlantic in the United States, the same situation occurred with the rise of robber baron industrialists.

“The fact that Marx was one of the most dedicated advocates of democracy, and that his diagnosis of capitalism remains widely relevant today, is not something that comes up often…”

Before discussing how modern capitalism is very much as Marx would have predicted, it should be said that Marx also gave capitalism its due, and praised it as a progressive system overall. Not only did capitalism destroy feudalism and the system of nobility, but it has produced more wealth than ever before in history. This cannot be underestimated. Today, the material well-being of human beings is many times better than just a century ago, along with average lifespan. But this does not mean that capitalism is the end-all social system, as certain writers declared in the nineties. Indeed, Social Democracy, which is somewhat of a compromise between socialism and capitalism (many policies of social democracy were first advocated by socialists), formed because of the very problems that Marx identified. One thing that Marx did not predict was that the governments of capitalist countries would mediate the class tensions and limit the economic instabilities that he had pointed out. The goals of Franklin Roosevelt and John Maynard Keynes were, after all, to save capitalism from itself — which is what the welfare state did.

Which brings us to the present. Last year, the French economist, Thomas Piketty published his book “Capital in the Twenty-First Century” (although the title is obviously an allusion to Marx’s work, Piketty has claimed never to have read him — which was probably a defensive fib) Piketty’s book is a book of data — which is why right wingers have decided to scream Marxist rather than admit how damning the evidence is to their supply-side worldview.

“Capital In the Twenty-First Century” examines how economic inequality has returned over the past forty years, since Western countries like the United States and the United Kingdom decided to reject the policies of Social Democracy (financial regulation, strong progressive taxation, pro-union/worker policies, etc.) and embrace free market neoliberalism. The mixed economy policies of the mid-twentieth century limited the excesses of capitalism that Marx had identified — the economy was more stable, while the middle class grew extensively. Along with the political shift, however, capital has become too strong and mobile, and our global economy has very much returned to the capitalism of old — more or less a new global gilded age. 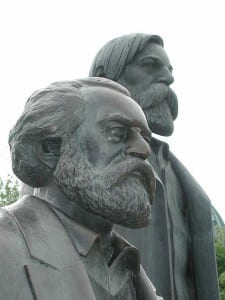 Monument to Marx and Engels in Berlin, Germany. Engels, a loyal lifelong friend and comrade, and an intellectual of the first rank in his own right,  was the one who actually prompted Marx to study economics.

So it seems that the thought of Karl Marx has returned, and “Karl Marx admirers” are entering the mainstream — but is this really such a surprise (or a bad thing)? The problems of capitalism that he wrote so extensively about have returned, and capital is stronger than before. It seems that radical ideas are needed today more than ever, and admiring an intellectual who diagnosed the contradictions of capitalism better than anyone else is not a burden, but an advantage.

David Simon, the journalist and creator of the acclaimed show, “The Wire,” wrote earlier this year:

“I’m not a Marxist in the sense that I don’t think Marxism has a very specific clinical answer to what ails us economically. I think Marx was a much better diagnostician than he was a clinician. He was good at figuring out what was wrong or what could be wrong with capitalism if it wasn’t attended to and much less credible when it comes to how you might solve that.”

This is, perhaps, how we should look at Marx: as a great scholar and diagnostician of capitalism. There is much to learn from his analysis, but figuring out how to solve the problems that he identified is up to us.

Conor Lynch is a writer and journalist living in New York City. His work has appeared on Salon, Alternet, The Hill, and CounterPunch.

ISIS is US: the Empire and the Evil Genie It Released

Marx did not “praise capitalism”. He noted that the bourgeois revolutions which it precipitated brought an end to the ancient regime, feudalism, but that they immediately began to replace it with their own despotic regime – the regime of capitalism