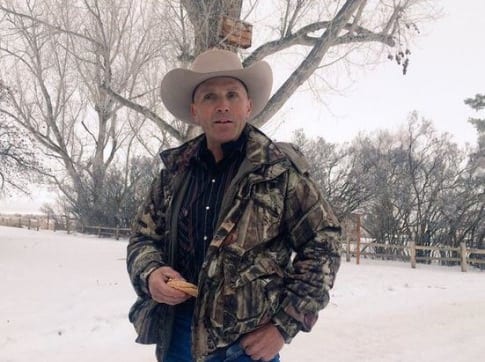 Finicum: Tried to live by an obsolete code filled with contradictions and a runaway social libertinism.

LaVoy Finicum chose to join Ammon Bundy in his armed occupation of the Malheur Wildlife Refuge outside of Burns, Oregon. He stood up as one of the spokesmen of the group. He made a public statement that he would not go to jail:

“I’m just not going to prison,” Finicum said. “Look at the stars. There’s no way I’m going to sit in a concrete cell where I can’t see the stars and roll out my bedroll on the ground. That’s just not going to happen. I want to be able to get up in the morning and throw my saddle on my horse and go check on my cows. It’s OK. I’ve lived a good life. God’s been gracious to me.”

So Finicum shows up at the refuge knowing that the odds are exceedingly slim that they are going to just be allowed to leave and go home. In other words, the odds were exceedingly high that at least the leaders would end up behind bars. Finicum was determined he would not go there. That left two options. One, that he would escape and go into permanent hiding in an attempt to avoid the consequences of his actions. Or two, he would create a suicide by cop situation and become a martyr for the cause.

If you watch the video of Finicum’s capture by the FBI and ensuing actions that lead to his death, you will see that initially raises his hands in surrender, but then clearly reaches inside his coat not once, but twice. The first time, the FBI does not shoot, but the second time they do, and Finicum falls to the ground presumably dead or dying.

While it is impossible to know what was going through Finicum’s mind, nor if there were words exchanged between Finicum and the officers, it looks very much like “suicide by cop.”

I am not arguing that LaVoy Finicum should have been shot, or that he deserved to be shot. I am saying that given his actions it is not at all surprising that he was shot.

If Finicum wanted to be a martyr for his cause, then he has likely succeeded with the help of the FBI.