Home AMNESIA - MEMORY HOLE All in the Bunker Family 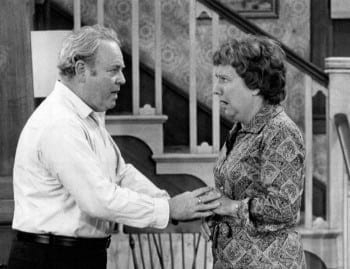 Why is the TPP not front and center in the debates? A question poetically tackled by Chuck Orloski with his Archie Bunker screen set.

no one around but for security cameras.

The Bunker family stayed up late,

and took seats upon favorite chairs.

she actually “pulled her weight,”

but Archie insisted he must find out

the Iowa caucus results prior to

and “pack it in for the night.”

“Why Archie… why don’t you

do something useful and sneak

over to the Capitol and find out how

“Tell me who gives Edith such ideas?

Who the hell has time to read it?

Who will let me inside Xerox room?”

Mad to a killing point,

the couple stared across empty hallway

and nobody in the Homeland laughed.

She lived unawares on TV for seven years.

She learned compliance with majorities

as well as any housewife did before her time. .

and the Bunkers fled for bunker below.

over at the Rotunda Bundestag-dunda,

you gotta dig – grab Iowa by the corn!”

Perhaps it was Archie’s only way

He shook off lead (Pb) contaminated

and pray none of them fruity-tootie

asses next to mine!”

Author’s note:   In 2002, along with my two sons (ages 11 and 6) and a work friend, we toured the Smithsonian Museum of History. Of all the historical artifacts and exhibits at hand, older son Dan most remembered the “All in the Family” display, and younger Joseph was fascinated with the Greyhound Bus interior toilet.

A Quest for Wisdom: Inspiring Purpose on the...

NEW AGERS VS NEO-PAGANS: CAN EITHER BE SALVAGED...

MY LOVE AFFAIR WITH RHYTHM AND BLUES: FROM...

The Pressure Campaign on Spotify to...

THE JOYS AND SORROWS OF BEING...