Farewell to Yarmouk: A Palestinian Refugee’s Journey from Izmir to Greece 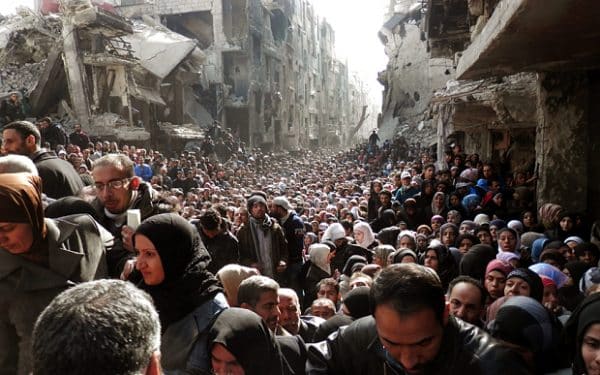 Syrian and Palestinian refugees now pack Yarmouk as this picture of people queuing up for food distribution shows. Photo: EPA/UN

(Based on interviews with Palestinian refugees from Syria.)

The refugee camp of Yarmouk was ever present in his being, pulling him in and out of an abyss of persistent fears that urged him to never return. But what was this refugee without Yarmouk, his first haven, his last earth?

How could any other spot in this unwelcoming universe ever be a ‘home’ when he had learned that only Palestine, which he had never visited, can ever be a home? When questioned, he always answered without hesitation: “I am from the village of so and so in Palestine.” Yet the Yarmouk Refugee Camp in Syria was all that remained of Palestine, as the Palestine he knew only existed in books or the tattered map in his family’s living room.

But at least he had her along to share his grief; without her he would have never embarked on his quest. His name was Khaled al-Lubani and her name was Maysam.

Their first attempt at crossing the sea was doomed to fail. The one thousand American dollars that Khaled’s father had given him in Yarmouk was almost depleted, and the money promised to him by his aunt in the UAE was still nowhere to be seen. By then, they had settled in Izmir at Turkey’s farthest western corner, and the closest in proximity to Greece.

Wanting opportunities and a chance at a real life, they knew this was just a temporary stopover in their long-term plans.

After a short stay at a cheap hotel, they sought an even cheaper accommodation, a small flat that cost them 400 Turkish liras each month. But with money running out, and Maysam’s anxieties increasingly suffocating her every thought, Khaled felt the pressure mounting. As he waited and waited for his aunt’s money, he felt as if she were dangling him off the side of a cliff.

When the Syrian war started, Khaled cared little for the politics of war. He had reached the conclusion a long time ago that nothing good came out of politics and that anyone wearing a government or militia uniform could not be trusted. However, the war inched closer to Yarmouk, despite the pleas of the refugees to the warring parties to spare them more agony.

And when Yarmouk was roundly destroyed, Khaled, pressured by the tears and pleas of his parents, fled. A long, costly and agonizing journey landed them both in Izmir.

Their first attempt to cross the sea was with Abu Dandi. There was something about his shady looks and face that suggested he lacked honor and could not be trusted. In his fifties, he was heavy, with a large, protruding belly, and short white hair. He was addicted to overcooked black tea, and spent most of his time at the ‘Syrian Club’ playing backgammon, oozing the crude confidence of an unatoned gambler.

Other Palestinian refugees pledged all of their faith to finding a new life via this no-guarantees trip. But an hour after their journey began, the dinghy’s small engine came to a complete halt.

In one single, heavy choke, without any sign or introduction, it completely expired. As alarm permeated Khaled from head to toe, he knew going back was just not an option. Adding to the acute drama, Maysam’s fears and anxieties were culminating into unintelligible mumbles about the scary sea below.

Left without any options, Abu Dandi called the Turkish coast guard, who eventually showed up and hauled them back to an Izmir prison.

They had met the captain of the second dinghy, Abu Salma, while in prison. Captured freshly after his own failed expedition, Abu Salma promised them deliverance or their money back, guaranteed. Sadly, their original payment was never refunded by the miserable smuggler with the protruding belly.

The second expedition was not successful, either, although, this time, the smugglers managed to take the boat much further. The engine did not abruptly stop, but nervously made a ticking sound before it quickly began to hemorrhage a line of dark diesel fuel into the crisp, blue Mediterranean Sea. The pathetic dinghy then suddenly stalled, immediately on reaching Greek waters. When the coast guard intercepted them, they threw out a rope from their large boat so that they could haul the unwelcome passengers to safety.

Trying to circumvent the Greek boat, the passengers rowed frantically and with all their remaining energy. It was as if this was their final task in their epic struggle to feel human again. But the dinghy was brought to a forced halt as the crushing emotions of defeat weighed heavy on their slouched backs.

With little interest in bringing the refugees to their side of the sea, the Greek coast guard robotically tuned out their chronicles of death and disgrace, and quickly telephoned the Turkish gendarmes who hauled the dinghy back to square one, holding its passengers prisoner for two more days.

Swearing in the name of his three-year-old daughter once more, Abu Salma insisted he was still the best smuggler in the business, and if it were not for their cursed luck, they would have already reached Greece and would have been dining like kings while the Greek gods watched from above. Promising the group a bigger and faster engine for their fourth try, Abu Salma, once again, led the passengers back to the same old designated spot where the dinghy was supposedly tucked away; but the boat was nowhere to be found.

Emotionally drained and tired, they walked back to the main road, only to find the gendarmes waiting for them.

When they attempted again, the group of nine had materialized into twenty, and included other war refugees, longing for the safety they were denied at home. This dinghy was slightly larger than the last one, but the engine was even smaller than their first. Heated reactions by the men ensued as they yelled and roared in anger. The women cried out in pain, some grabbing their hearts, some dropping to their knees. Maysam broke down and buried her sopping wet face into the sand.

Most of the passengers just walked away and stood in the sand trying to conjure up a plan that no one had envisioned prior. But the Palestinians, along with Khaled and Maysam, stayed. Their will was just too strong to give up after all they had gone through. Assuming the role of leader, they were urged on by Khaled, yet again.

“Just go this way,” the smuggler pointed his stubby fingers into some direction in the dark. And that is just what Khaled did. He challenged the darkness and what he saw as the final push towards freedom. For the entire journey, Maysam quietly sobbed and held onto his arm for dear life.

Then, finally, the much awaited lights of the Island of Mytilene glittered in the distance. “Ya Allah, Ya Allah, Ya Allah,” muttered Maysam in a final attempt to cram in as many prayers as she possibly could so that the dinghy would reach the shores, bringing an end to the Syrian and Turkish nightmares, and freeing them from the abyss of the condemned.

A small jar of crunchy peanut better was all that Khaled and Maysam had left in their small duffel bag when their feet first touched the sand of Mytilene late one night. The exhilaration of their success blasted up their spines as they cried and jumped for joy.

But as they tried to process the unbelievable comfort the white sand offered them, it was quickly overshadowed by a haunting, unforeseen and unexpected fear of the future. The water soaking through their trainers suddenly felt like a cold omen.

Steven Argue: Posturing by client-state despots not to be trusted

The Imperialists’ and Proxies’ War against Syria