Liberal Hate for the Green Party 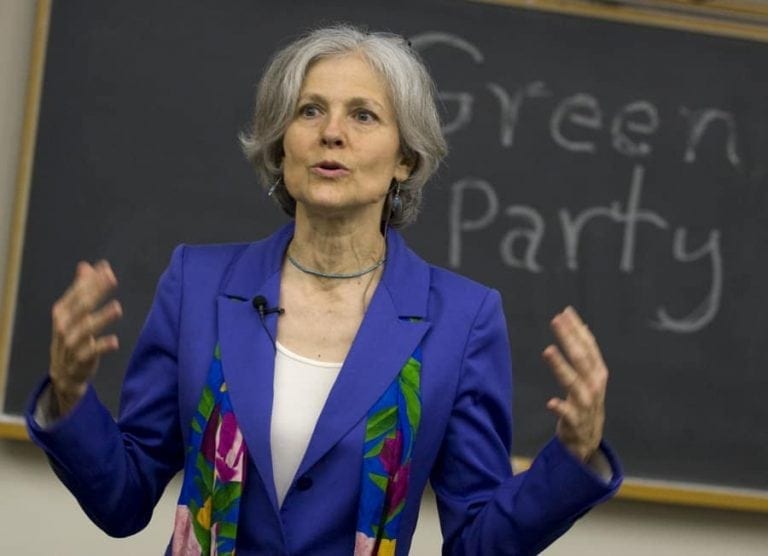 Editor's Note
Kimberly raises some excellent points about the Liberal wholehearted embrace of Hillary Clinton, but one has to wonder if there is some psychological process at work for this embrace goes beyond intellectual laziness or simple lack of political sophistication. It smacks more closely of Stockholm syndrome where the captives become ardent supporters of the captor. Is it fear? Not simply fear of what a Trump presidency would mean, but a much larger fear of all of the catastrophes hanging on the cliff above our heads. Perhaps I am nuts, but I see a barely contained panic all over the place - even in traffic situations. So many people, so tense, and little things cause massive blow-ups. This barely contained desperation may be reflected both in the Liberal's embrace of Clinton, and in the odd assortment of bed partners who have latched onto Trump. All of these folks have moved well beyond the "lesser of evils" argument, to "my candidate is a miracle worker" ideation. Maybe it is simply that people are desperately needing a hero (in the comic book sense) at a time when it seems only that will save them from the monsters on the cliff

Liberals have joined Hillary Clinton’s “big nasty tent” in a very big way. They have moved far beyond the usual rationales for sticking with the Democrats and are now carrying on a full-fledged hate fest. Their targets are Green Party presidential candidate Jill Stein and her running mate Ajamu Baraka, who is also a Black Agenda Report editor and columnist.

The screeds have become more and more extreme and defy the run of the mill rationales that progressives use to justify remaining within Democratic Party lines. Holding one’s nose and voting for the “lesser evil” democrat is passé. So is fear of Republican judicial appointments. Concern for abortion rights doesn’t cut it anymore.

Liberals are no longer going through the motions of criticizing the Democrat. Instead they openly show love for Hillary Clinton and disdainfully pile on Stein and Baraka with fury. The blog Wonkette called Jill Stein “cunty” and “a mendacious nihilist piece of shit.” The site Very Smart Brothas declared that a vote for Stein was akin to putting it in the trash. They also threw in a dig at Cornel West because he dared to criticize Barack Obama. The Huffington Post chose to deride Green Party convention delegates because they ate at McDonald’s. Gawker tried to link Ajamu Baraka to holocaust denial. His unassailable human rights credentials didn’t mean much when the media decided to go into attack mode.

The list is long and will get longer between now and Election Day. The degree of antipathy is actually quite useful. It tells us why the Green Party is so important and why liberals are such a dangerous enemy.

They are wolves in sheep’s clothing. They spend years wringing their hands because Republicans control state legislatures but when the recently released DNC emails show that the party starves local races of money they say nothing. When they spoke up at all they made a big deal about a spurious Russian hacker connection to Donald Trump.

There is no longer any pretense of claiming a desire for systemic change or even calling themselves progressives. They are “with her” — as the slogan goes — and her illegal activities and record of mass killing don’t dissuade them from supporting her.

Liberals don’t want the Democrats to change. They cling to a bizarre hope for reform, nibbling around the edges while keeping the criminals in charge. They prefer to look down their noses at Trump supporters or consider themselves the cool kids in the high school clique. When they have an opportunity to make history and begin the process of dismantling the hold of the Democratic Party they instead become quite vicious on their behalf.

Donald Trump is the perfect foil for their con game. His open appeals to racism and unpredictable statements and behavior give them an excuse to do nothing except make excuses for the very crooked Mrs. Clinton.

They don’t even feign concern when Republicans who contributed to Chris Christie and John Kasich start doling out dollars to Hillary. They long ago gave up on fighting for peace and just as the name Trump is a one-word attack ad, questions about foreign policy turn into harangues directed against Vladimir Putin.

Liberals have sided with the ruling classes and resist anyone pointing out the truth. While they falsely accuse Jill Stein of being anti-vaccine, even after she clearly stated she was pro-vaccine, American police departments keep up their body count. The United States risks war with China and Russia and unemployment is still high. But they say nothing about any of those issues. They cheerlead for Hillary Clinton just as they did for Barack Obama and will say nothing against her once she is in office.

The election of 2016 will be a notable one in history but for all the wrong reasons. Millions of people voted for the not-so-left wing Bernie Sanders who wasn’t serious about denying Clinton the nomination. Yet it must be said that they wanted change within the Democrat Party. He left his followers high and dry and made the case for the people who feared and scorned his half-hearted campaign.

While Democrats were confused about what made a candidate a progressive, the Republicans were following a new leader. Donald Trump was a political novice who used free media attention and blatant appeals to white nationalism to win the nomination. But Trump makes statements which don’t sit well with the Republican establishment. He went on record saying that the trade deals beloved by the duopoly are harming American workers. He asked reasonable questions about United States/Russian relations. He was then used to invent numerous lies about the Russian president, who was already demonized by the media and the ruling classes.

Liberals are now quite deranged and applaud a woman who will crush their feeble agenda as soon as she says the oath of office. Progressives and big money Republicans are now on the same page and that is why Stein and Baraka face so much scrutiny and so many big lies.

The Green Party’s existence is proof that the Democratic Party emperor has no clothes. The logical progression of success for the Greens is the end of the party which claims to be more inclusive and the champion of working people and human rights. It does none of those things while the party which actually articulates these policies has been designated an enemy.

In this case the enemies of the enemy are most definitely our friends.

From words to deeds: Tehran-Beijing-Moscow Axis changes everything

Biden’s move to impose a DHS board to...

‘Toute nation a le gouvernement qu’elle mérite’ (de Maistre, 1811) The presidency of Hillary Clinton will very much resemble the early years of the British Empire under Queen Victoria. Like with Great Britain, where the raw groundwork for its empire had been established before circa 1830, it was reached in the US since about 1917 . Clinton’s presidency will be the beginning of the flowering (and decadence) of the full US Empire, much how England bloomed into the final conquests and its direct open colonialism to establish the firm boundaries of its influence (it was said 1/3 of the globe… Read more »