He's one of the lizard people

We wonder, to get a top comedy network show, does one have to sign a contract in blood promising to do the bidding of the globalist a-holes who run the networks?

The evidence suggests that one does.  Remember the miserable Jon Stewart and his endless skits slipping in all kinds of lies about Putin?   Stewart even visited the White House to coordinate the lies he was spooning out mixed in with his jokes.

How about Samantha Bee's recent full-court press lie marathon about her recent trip to Moscow?  Then there is always ol' weasel face, aka John Oliver, who acted like an eager puppy dog for the Clinton campaign. 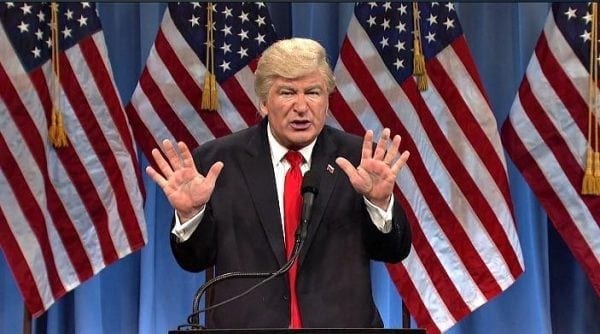 Alec Baldwin in SNL sketch supposedly just having fun with Trump but in effect buttressing the claims that Trump is in Russia's pocket. Not funny.

And let's not forget Saturday Night Live, the un-funniest show ever, written by and for the preternaturally humorless. (See how Newsweek, another organ in the CIA-liberaloid Democrat axis describes the whole skit; it's a model of subtle but effective disinformation. The video clip is at the bottom of this page in the Appendix.)

Colbert has been a reliable soldier in the battle against Trump and Russia.  This is his latest contribution, where he casually mentions that a 'consensus' in the intelligence communities have decided that Russia hacked the election.  And that is no joke!

All chuckling aside, this is lethal stuff.  People let down their guard when they are laughing along with the jokes, and these guys use the opportunity to slip in the stiletto.  Their audiences dwarf the news shows.

It's a problem which needs fixing.

Start watching at the beginning.

NOTE: ALL IMAGE CAPTIONS, PULL QUOTES AND COMMENTARY BY THE EDITORS, NOT THE AUTHORS • PLEASE COMMENT AND DEBATE DIRECTLY ON OUR FACEBOOK GROUP CLICK HERE
RevisShielded: 7
All comments subject to anti-hacking filters.
0
FacebookTwitterPinterestRedditEmail
previous post

Donald Trump’s interview: a red light to Angela Merkel, the EU and NATO; a green light to Russia